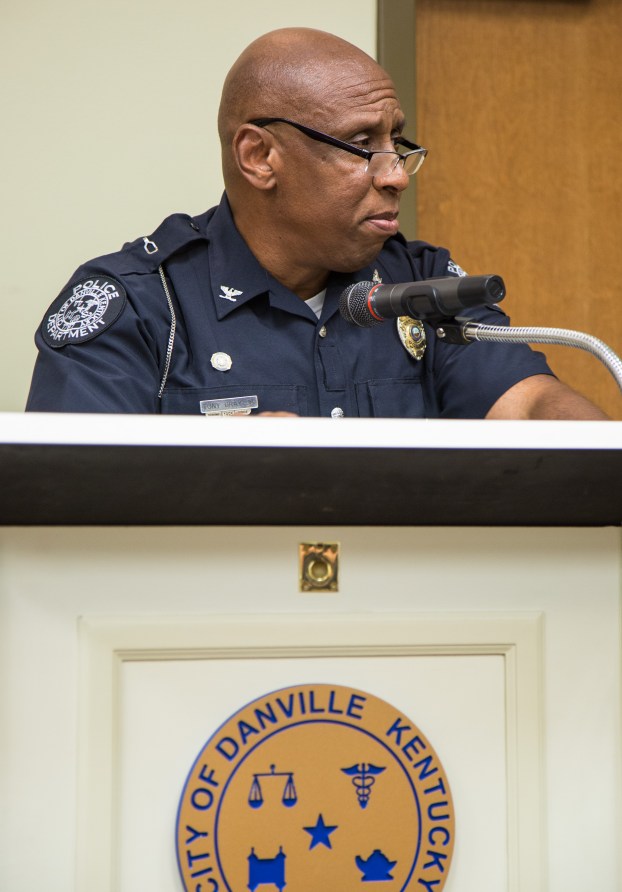 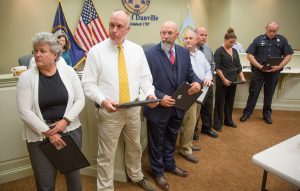 Seven people have been recognized by the Danville Police Department for their roles in the case against Kenneth Allen Keith, the man who pleaded guilty to the September 2013 murders of Mike and Angela Hockensmith and Dan Smith.

“I think this was a very significant case for our community,” Gray said on Wednesday.

He credits the tips received and those working on the case for the arrest of Keith on Oct. 9, 2013 — 19 days after the murders.

“It was a very complicated case,” Gray said.

Keith pleaded guilty to murder, first-degree robbery and first-degree burglary on May 26 and is now serving life without parole at the Roederer Assessment Center.

Det. Owens with the Kentucky State Police was the first person outside of the agency to reach out, Gray said.

“I think he was actually at (Rainbow) Cleaners when we arrived. He came out and asked us what was going on,” Gray said.

When Gray told him what happened, Owens offered to help.

Another instrumental person outside the Danville department was Special Agent Brasher with the Department of Alcohol, Firearms and Tobacco.

The day of the murders, Brasher and some of his agents were scheduled to appear in court in Lexington, when the defendant pleaded at the last minute, Gray said.

“They happened to see it on the news and called. Same thing (as Owens) … They came in and helped that day,” Gray said.

Brasher continued helping the department as the investigation proceeded, he said, and was able to use his connections to reach beyond state lines when necessary.

From the Danville Police Department, Gray said it was important to give recognition to Asst. Chief Robert Estill, who is the primary supervisor for investigations, but also is the evidence custodian, handing “very, very numerous” pieces of evidence, Gray said.

Some of that evidence was sent to the ATF labs, some was put into the Automated Fingerprint Identification System, and some went to the Kentucky State Police labs.

“Chain of custody in a case like this is paramount,” Gray said to commissioners in August.

On Wednesday, Gray said keeping that chain of custody can be tedious. It was important, however, because the case could have gone to a trial.

That team, he said, worked really well together.

“They were very professional. Egos were laid to the side. Everybody had faith and trust in each other,” Gray said. “Their working relationship was just outstanding … It was all about solving the case.”

There was a lot of communication among the seven, Gray said, and they used their connections and resources to help the case.

He said they expected it to take a bit longer from the time they began looking at Keith until he was arrested. The case picked up speed more than anticipated, thanks to resources from ATF and KSP and after Tracy Herald began making recorded calls to Keith — in fact, Gray was on vacation when the arrest occurred.

“The case — it took a long time. There were many twists and turns,” he said. It “consumed” the case work for this group of people throughout the almost four years until it was resolved.

Gray said he believes a big reason this case resonated so much in the community was the fact that the Hockensmiths’ two young children were inside the store.

“That’s part of it. That and, with this case, there was nobody there with that ‘smoking gun,’ per say,” he said.

It was the public aspect of the murder, Gray said, “almost in the heart of town” and the fact that it literally could be anyone.

He said it was also significant that the murders were not drug-related.

“It’s sad society has come to this, but if it’s drug-related, it’s considered to be a sign of the times,” Gray said. “Somebody coming into a business and murdering someone, that sends a different shock through the community.”

“I’m proud of those guys. I’m proud I’m associated with those people,” Gray said. “These are all excellent people at what they do … that really is the reason this case resolved itself in the manner that it did — these people are very professional and they worked well together.”