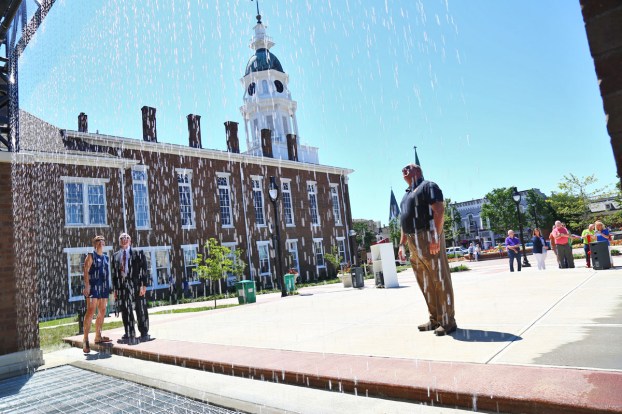 File photo by Ben Kleppinger From left, Jennifer Kirchner, Ron Scott and Ken Pflug check out the new water curtain feature in Weisiger Park during a dedication of the renovated park in June.

Danville City Commission heard from a member of the public Monday who wasn’t pleased with the recent renovations to Weisiger Park outside the Boyle County Courthouse.

“You may find this to be a rather stupid comment or observation, but it wouldn’t be the first one I ever made,” he said. “During the design and so forth of Weisiger Park, there was a lot of discussion about building the water curtain — it was late putting it up and so forth … rather recently I observed we do have water coming down there. You can’t see it. If you’re on Main Street, you don’t have a clue.

“… I don’t know what we accomplished other than spending a lot of money to get that. And I don’t know if there is any way that that can be enhanced so that somebody can see it. But right now, it’s worthless in my view.”

He suggested colored water or lights to improve the appearance.

City commissioners said there are some lights in place currently. City Engineer Earl Coffey said there’s a sample set of lights currently installed, indicating that the lighting situation may be improved in the future. But it’s likely you’ll never see the water during the day, only at night, he added.

“It still will not be visible in the daytime. There’s not enough water that falls down through there, big enough drops or whatever, to see it,” Moore said.

“Water is clear, so unless you add turbidity to it — which that’s really not the purpose of it, to be a turbid fall, it’s mean to be more a subtle drop,” Coffey said. “It’s not necessarily going to be an elaborate visual — something you can see from far, far away, right? Because water is clear, obviously.”

“It looks pretty in pictures,” said Commissioner Denise Terry, who held her wedding at Weisiger Park following the renovations. “It looks like sparkles.”

“Yeah, but people coming into town and driving down Main Street today — that doesn’t mean a thing; you can’t see it,” Moore said. “I thought it was supposed to be something that would add to the overall vision of the park.”

Commissioner Kevin Caudill said he has heard that people who work in the courthouse have complained about noise from the water wall. Coffey said he’s heard that same thing “second-hand” but not from anyone who has actually experienced it.

Caudill said he agrees it would be nice to be able to see the water wall better.

Terry reiterated Coffey’s statement about the noise being a feature.

“It sounds nice when you’re in the park, and I think that’s mostly the purpose of it.” 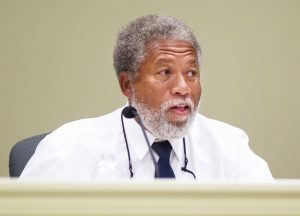 “It’s not what I voted for, though,” Commissioner J.H. Atkins said. “I voted for it because I wanted to see it as well as hear it. I’m still waiting for that to happen, and I don’t know if it’s ever going to happen.

“I think it’s important for people to see it. And as we travel the backroads of Kentucky, there are some examples out there of the exact same thing that you can see from the road.”

Danville officials dedicated the renovated park in June, at which time Mayor Mike Perros announced the project had been completed for a total cost of $594,000 — $141,000 less than the original budget of $735,000.

Savings aside, there were numerous delays in completion of the renovations. The city commission first approved of the three main features — the water wall, fountain and pergola — in February 2016. Officials had hoped to have everything complete in time for last year’s Brass Band Festival, but delays in the installation of the fountain and water curtain slowed progress.

City commissioners were unhappy initially with the appearance of the fountain, but further work has since been done to make the water flow in a more attractive way. Commissioner Rick Serres said Monday he was pleased with the improvements to the fountain and hopes similar improvements can be made to the water wall.