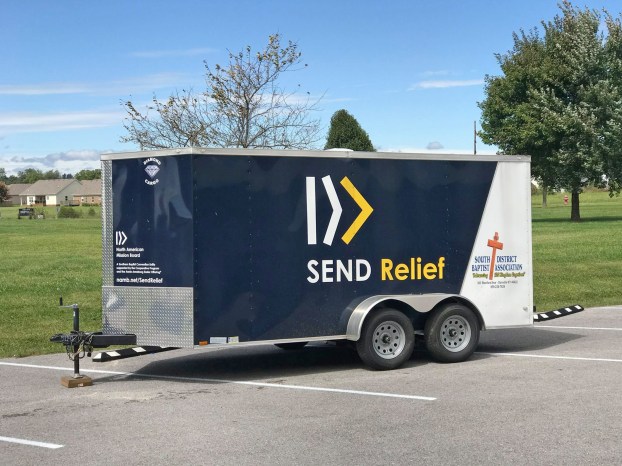 Photo submitted This trailer will be loaded down and taken to Humble, Texas, to help with Hurricane Harvey relief efforts. People can drop off donations at the Junction City First Baptist Church on U.S. 127 on Friday and Sunday.

Boyle County residents have another opportunity to help those impacted by Hurricane Harvey — a group of three will be leaving Monday morning with supplies and a willingness to work and are bound for Texas.

“I just felt, personally, I felt like God was asking me to step out of my comfort zone and go help,” said Jeremy Thompson, who will be leaving Monday to go to Humble, Texas.

There will be three men — Thompson, Rob Spurlock and Cody Preston — leaving from the Junction City First Baptist Church, taking with them a 14-foot trailer, which has been donated to use from the South District Baptist Association and the North American Mission Board. Thompson is a member of Junction City Baptist Church, Preston has family who attends the church and Spurlock works with Thompson.

They will be visiting First Baptist Humble, about a 15-hour drive, and Thompson said members of the church who live in nearby Huffman, Texas, was putting the three men up.

He connected with First Baptist Humble because a pastor at the church, Steve Horn, is originally from central Kentucky and knows the Amanda Sergent, the wife of Junction City First Baptist’s pastor, Choe Sergent.

“At our church, we look at missions in three different ways: local missions; regional missions, which is the southern part of the United States; and global missions,” he said. “I just really felt like God was calling me to go down and help.”

Besides taking donations, the men will help with the clean up and rebuilding efforts during their time there. They will return to Boyle County on Sept. 22.

Thompson said he has worked on other mission trips and similar relief efforts before.

“It’s hard,” he said. “It’s different than seeing it on TV. It’s good to be there, physically helping people.”

It will be the first time for the other two men.

“It’s a good teaching moment,” Thompson said. “The biggest reasons I feel pulled to go and do the regional mission work is to have people step outside. We go to church, we give money, but we want people to see there’s real people out there. Real hurting people that are in need.

Thompson said they don’t want to just go one time and that’s it, but plan to build relationships with the people of Humble, Texas.

“We want invest in these people and help them for the longterm.”

The number one goal, he said, is to love on people, to “let people know they’re know alone.”

“We’re not building houses in three days, but we’ll be able to help the best we can,” Thompson said.