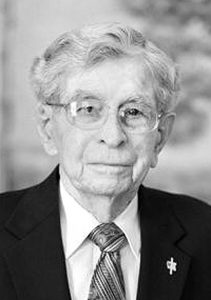 at Charleston Healthcare. He was born on February 11, 1926 to the late William Fenton and Nellie Moore Davis. John is survived by his loving wife of 68 years, Christine Davis.

John served his country proudly in the US Army. He graduated from Tompkinsville High School and Gupton Mortuary College in Tennessee. John was a proud funeral director and embalmer for Preston Pruitt Spurlin Funeral Home for many years. He was one of the longest licensed funeral directors and embalmers in the state of Kentucky, holding his license since 1951.

John had a passion for helping families, which extended with him being magistrate for Boyle County for over 33 years. He was involved in many organizations over the years, including the Lions Club, Masons, and the Old Goats Club. John was a faithful member of the Centenary United Methodist Church, which he dearly loved, and was a member of the Pruitt Sunday School Class.

Along with his wife, Christine, he is survived by two sons, Stephen Davis (Jomin) and Mark Davis, both of Danville; two grandsons, Oliver Davis and Collins Davis (Allison); and two great-grandchildren, Audra and Cora Davis. He was preceded in death by four brothers, Clendon, Clifford, Clovis, and Clive Davis.