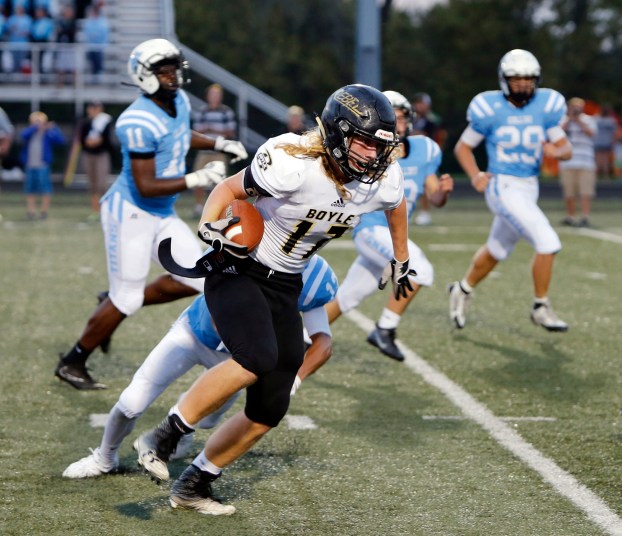 Rebels dominate line of scrimmage for big win at Collins

SHELBYVILLE – Boyle County may not have looked sharp in every area or at all times, but the Rebels got the most important things right Friday night in their victory over Collins.

Better blocking allowed Boyle’s offense to make big plays both in the running game and the passing game in what was expected to be something of a shootout, and bottling up Collins’ best offensive player kept it from becoming one.

The result was another one-sided win for the Rebels, who overcame a slow start by scoring 24 unanswered points and went on to throttle Collins 45-17.

Boyle (4-1) got three touchdowns through the air and three on the ground, while Collins (3-2) got only one touchdown from quarterback J.R. Lucas, who had figured in 10 of the Titans’ 11 TDs in their first four games.

And no, it wasn’t pretty in the early going, when the Rebels went three-and-out on their first two series and the Titans scored with relative ease on their first possession. But everything worked out in the end as Boyle, ranked No. 4 in Class 3A last week, defeated the Collins, the No. 2-ranked team in Class 4A, for the third consecutive year and the fourth time in as many meetings in the series.

“What was good was we found a way to win, but we didn’t look pretty at times doing it,” Boyle coach Chuck Smith said. “I just don’t think it was a pretty win, but I’ve never seen a win that I haven’t liked.”

Smith had said better blocking would be a necessary ingredient in this game, particularly to allow Boyle to get its running game going. The Rebels averaged 188 rushing yards in their first four games, but they had 219 on Friday.

“We practiced hard this week and prepared for this team better than we did last week,” said Boyle running back Tanner Crawford, who rushed for a game-high 192 yards and three touchdowns. “I’m thankful for my O-line blocking for me to get those three touchdowns.”

Boyle’s ground game did most of its damage in the second half, when Crawford ran for 120 yards and all three of his scores.

“(Offensive coordinator Chris) Pardue and the offensive coaches made some nice adjustments at the half,” Smith said. “We changed where they were lining up and we changed a couple blocking schemes, and it really worked. We really ran the ball well in the second half. Tanner Crawford did a nice job.”

It was the best rushing night of the season for Crawford, who had 163 yards in the Rebels’ win over John Hardin and 138 in the win over Waggener. He shouldered the load at Collins, carrying the ball 20 times because Landen Bartleson was banged up and limited to five attempts.

“When the O-line made holes, I hit them, and I kept my feet up. I didn’t let one person stop me; I kept going,” Crawford said.

Most of Boyle’s offensive success in the first half came from the passing game. Quarterback Reed Lanter threw for 148 yards and three touchdowns, and he finished 15 for 20 for 214 yards.

Lanter tied the game at 7-all late in the first quarter with a touchdown pass to tight end Clete Hellyer, who shook off a defender after catching the ball on a slant route and completed a 34-yard play for his first score of the season.

A fumble recovery by Clay Karsner on the ensuing kickoff allowed the Rebels to take the lead 24 seconds later with a 13-yard TD pass from Lanter to Nick Walker.

After a 26-yard field goal by Harrison Mesplay, Reiley Colwick caught his first touchdown pass of the season, a 7-yard score than gave Boyle a 24-7 lead with 1:39 to play in the first half.

Crawford scored on runs of 5, 2 and 42 yards in the second half as the Rebels pulled away.

Boyle finished with 433 yards, while Collins had 273 after averaging 493 in its first four games.

Lucas led an impressive scoring drive on the Titans’ first possession, which was capped by an equally impressive 19-yard touchdown pass to Cameron Harris in the end zone.

The elusive Lucas, who averaged 144 rushing yards and 240 passing yards, rushed for 33 yards on the opening drive but netted only 27 yards on the ground the rest of the night. He finished with 60 rushing yards on 25 carries, and he completed 11 of 22 passes for 156 yards.

“It was actually really tough. This entire week we put our best runner back there, and we were trying to contain him all week long,” Hatter said. “He did what he was supposed to do. We just did our job, too, and that’s why we kept them to 17 points.”

Hatter said that started by not letting Lucas get to the edge.

“We just got outside and we kept him running to where he had to bounce inside, and our linebackers came in made great plays,” Hatter said.

Smith said it was a team effort by all three of the units within the Rebels’ defense.

“They just played hard,” he said. “Our defensive line was fighting and scratching and clawing in there, and our linebackers did a nice job of taking the air out and making the hit once he was flushed out. I was really pleased with how they battled in there and got it all done. And it was all made possible because our defensive backs covered well.”

Collins went 25 minutes between its first touchdown and its second, which came midway through the third quarter after Boyle had taken a 31-10 lead.

The Rebels answered with a six-play scoring drives that opened with completions by Lanter of 27 yards to Hellyer and 12 to Sam Tiller and continued with four carries by Crawford for 41 yards, and the Titans never threatened again.

With half of the regular season now in the books, the Rebels have one more game ahead Friday against North Hardin before beginning its district schedule. North Hardin (2-3), the only Class 6A school on Boyle’s schedule, has allowed more than 40 points three times already this season, but the Trojans shut out North Bullitt 37-0 on Friday.

Boyle County will face another quality dual-threat quarterback on Friday. The Rebels will visit Collins in a battle between two... read more