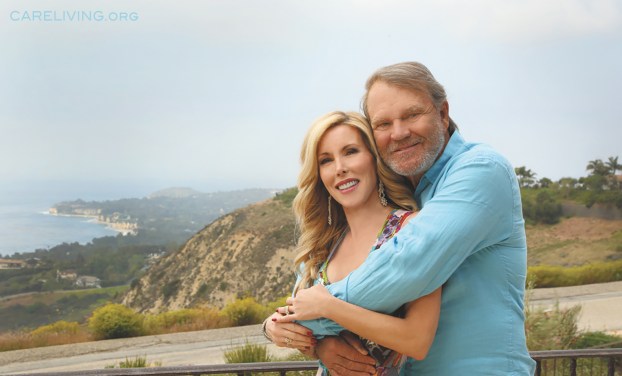 Photo courtesy of Kim Campbell, careliving.org Kim Campbell with her husband, the late Glen Campbell. Kim Campbell cared for her husband after he was diagnosed with Alzheimer’s in 2011 until his death on Aug. 8.

Alzheimer’s is a disease that robs the mind while leaving the body — no one knows this better than Kim Campbell, the wife of the late Glen Campbell.

On Sept. 28, she will be at the Centenary United Methodist Church in Danville to speak on the disease and her journey as a caregiver.

This is the fifth event Kim Campbell and the foundation have partnered together on, according to Amy Clarke, corporate communications director. The others were in Chattanooga, Knoxville and Brentwood, Tennessee, and Lexington.

“Morning Pointe has made a commitment to spreading awareness about the needs of Alzheimer’s caregivers,” says Greg A. Vital, president and CEO of Morning Pointe Senior Living, in a press release. “For several years, we have been proud to provide a platform for Kim’s message, as her story has brought much inspiration to each person who hears it.”

Clarke said that no one realizes the challenges facing caregivers more than Kim Campbell.

“As an Alzheimer’s caregiver, she has made it her mission to reach out to families with her personal message of hope, letting them know that they are not alone,” Clarke said. “This is a very important event for any family touched by this disease.

“With Glen’s final 151-city Goodbye Tour, he helped people across the country talk about Alzheimer’s disease. We … are continuing that conversation by bringing this event and offering ongoing caregiver support groups …”

The Goodbye Tour, which came right after he was diagnosed with Alzheimer’s was supposed to only last five weeks, but ran for a year and a half, and was documented in a film called “Glen Campbell: I’ll be me.” The movie is available for viewing on Netflix and will be available for purchase at the Sept. 28 event.

Via phone, Kim Campbell called it a “really important film.”

“It did a lot to take away the stigma of Alzheimer’s and show people what living with Alzheimer’s is like,” Campbell said.

The film received a Grammy for best soundtrack, was nominated for an Oscar and got a 100-percent rating on Rotten Tomatoes, she said.

“You can’t do better than that,” Campbell said. “It’s funny, it’s empowering, it’s uplifting … It shared our family’s journey from the time of diagnosis through the early and middle stages of the disease. I’m just so proud of my husband for just being open and honest about what he was going through and inviting the world to see, for the first time, what living with Alzheimer’s is like,” she said. “Most people, in the past, got that diagnosis, and there was a stigma attached to it. Some people are embarrassed or ashamed. Glen said, ‘Hey, I’ve got Alzheimer’s, but I feel great and I’m going to continue getting out there and doing what I love with people I love.’ He embraced his life and we embraced it with him.”

Campbell said she believed the video brought Alzheimer’s out of the shadows and gave a lot of people hope and courage.

Eventually, there came a time for the tour to end. The movie, which shows the progression of the disease on Glen Campbell, shows that his last concert was in Napa, California.

“You get to a point where you can’t work anymore. We were coping with it at home and still using friends and family as our support team,” Campbell said. “Alzheimer’s at the later stages is a 24/7 job. No one can take care of someone with Alzheimer’s by themselves. You just can’t physically, mentally do it. You need to have a team of support around you.”

Most families, she said, try to keep their loved ones at home as long as possible, which is what the Campbell family did. There are also professionals who come into the home to help.

There are similarities, she said, but people have different personalities, which is why it appears in people so differently.

“So many people think Alzheimer’s is just about losing your memory, your short-term memory and then your long-term memory, being forgetful. There’s so much more to that. You lose your ability to think and reason,” she said. “You also lose your perception of reality. You can become suspicious, paranoid. You don’t recognize objects anymore, what they’re for … You don’t understand what’s safe and what’s not safe.”

Eventually, the disease progressed so that Glen Campbell could not remain at home. That’s when Campbell learned about memory care facilities.

“I did not know they existed. I had — there’s an outdated perception of nursing homes out there. We don’t use that term, it doesn’t apply to an Alzheimer’s Center of Excellence, like the Lantern at Morning Pointe,” she said. “These communities are especially designed for people with cognitive issues.”

There are over 120 forms of dementia, she said, and Alzheimer’s is one of the more common.

Campbell said she had become friends with the other families whose loved ones were in the memory care facility where her husband stayed.

“We support each other and love each other along the journey. There’s so much better quality of life there for people living with Alzheimer’s, where you’ve got music therapy, pets and activities … It’s been a good experience for my family and it saved us from becoming the second victims of this disease,” Campbell said.

So many caregivers, she said, deal with depression, anxiety, guilt, fear and sometimes physical harm; they also feel stressed out and are often isolated. Some deal with a big financial hit, because it can be expensive to care for someone with Alzheimer’s.

“Glen removed the stigma of getting the diagnosis,” Campbell said. “I would very much like to remove the stigma of longterm care because it really is such a gift to families who are going through this process.”

She said people are stuck with this outdated idea, when it comes to care facilities, because they think of nursing homes, bad smells and people lined up in wheelchairs.

“It’s totally a false perception of what’s out there for families,” Campbell said.

Glen Campbell was in a memory care facility in Nashville in early 2014, until his death on Aug. 8. 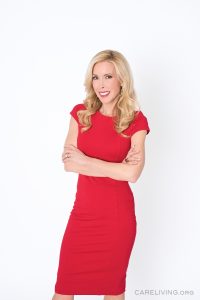 Photo courtesy of Kim Campbell, careliving.org
Kim Campbell, wife of the late Glen Campbell, will be speaking on Thursday, September 28, at 7 p.m. at Centenary United Methodist Church, on the Alzheimer’s disease, its toll on families, the importance of caregivers and how important it is for caregiviers to take care of themselves.

Campbell said she is “still sorting out” her feelings regarding her husband’s passing.

After his passing, Campbell wrote a eulogy, which is posted on her blog, careliving.org. Other resources can be found on her site, too.

“It encourages caregivers to take care of themselves while they care for the ones they love. It’s a source of inspiration for caregivers,” she said.

Losing a loved one to Alzheimer’s is a traumatic thing, Campbell said.

“It’s like you lose your loved one twice. When they descend into the later stages of Alzheimer’s and they begin to forget who you are and so many other things, it’s just a constant gradual loss,” she said. “When they call it the long goodbye, they truly mean it. It’s traumatic to finally lose them completely. I’m still sorting out my feelings through that.”

Through this journey, Campbell has met many new people, people who are going through similar things.

“It helped me so much to find someone. Unless you actually experience it, you’ll never really know,” she said.

She’s also part of a support group in Nashville, women who are caring for their husbands who have Alzheimer’s. She’s remained in the group to provide additional support as they continue their journey.

“To lose a spouse is heartbreaking,” she said. “These people have loved me and supported me through this.”

She’s also glad to be able to use her platform to help other caregivers on a more public way.

“I want to provide hope to families. You can make good decisions for you and your families, and know you’re not alone. For people to come out, and hear what someone else has been through, how they came to make their decisions. I want to help remove fear, guilt and provide hope. It’s good for me. It helps me to help others.”

Campbell said she thinks helping others is also a way she can bring good out of her husband’s death.

“You want to try to bring some kind of good out of a tragedy, to bring meaning and purpose to your life and what you’ve been through. Being part of the Alzheimer’s community and help them the way they helped me is my way of giving back. I’m just so filled with compassion for families dealing with this. If I can help in any way, it’s a blessing to me.

“I’m trying to change perceptions. I’m trying to help people find a positive way through our journey. That’s what my website’s all about.”

There are no sob stories on careliving.org, she said, because caregivers understand fully how hard it is. They are stories of hope and inspiration.

“We want to try to find the joy in each day. We want to support one another with love and hope. That’s what my message is about.”

She said it’s important to remember that people with Alzheimer’s can continue living their lives, in the early and middle stages, as long as they have support.

“You need to focus on their strengths, that’s what somewhere like Morning Pointe does. They tailor the whole experience around who that person is. They respect their dignity, their identity … they provide quality and a sense of well-being to, not only the person who has dementia, but the whole family. I’m looking forward to coming to Danville to tour that one.

“I’m encouraged, by my travels around the country, how the senior living industry is ramping up to find a cure for this dreaded disease … People realize there is a necessity for these communities that take care of people in the late stages of Alzheimer’s. These areas are beautiful and happy, healthy places. Making the best out of a bad situation — people like Morning Pointe are getting it right. It’s an incredible thing for families to have this as an option.”

Kim Campbell will be speaking at a free event, sponsored by the Morning Pointe Foundation and Morning Pointe of Danville, 7 p.m. Sept. 28 at Centenary United Methodist Church, 1441 Perryville Road. Doors will open at 6 p.m. Handicapped seating is available, but the event is a first come first serve on seating. Reserve a spot by emailing themorningpointefoundation.com or by calling (877) 776-4683. DVDs and CDs of “Glen Campbell: I’ll be me,” the movie which documents his last tour and his life in the early stages of Alzheimer’s disease, will be available for purchase.

Will Junction pay to play?