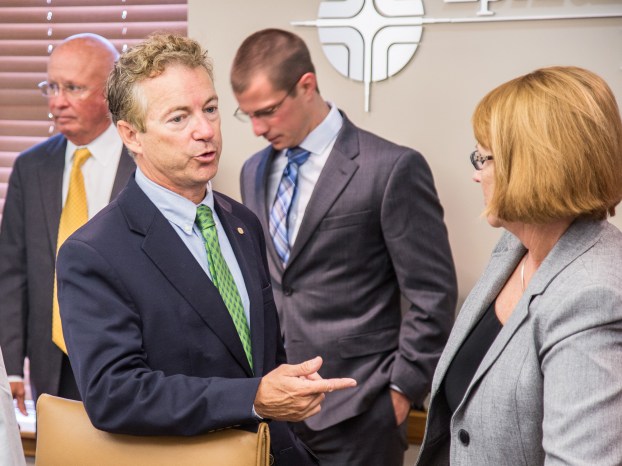 Paul commented on his conversations with the president during an hour-long health care round table with local leaders in the medical and business communities, held at Ephraim McDowell Regional Medical Center. The event was not open to the public, but media were invited to attend. 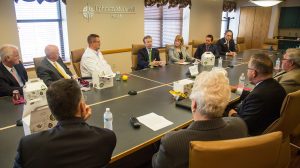 Paul heard from numerous members of the Boyle County community who are feeling squeezed by health care costs, from employers to doctors to hospital executives to the local Chamber of Commerce director, Paula Fowler.

Fowler told Paul prior to the Affordable Care Act, she felt she had control over her health insurance plan, but now prices have skyrocketed and she feels “priced out.” The Boyle County Chamber of Commerce is partnering with another area chamber to offer health association insurance plans, which are legal in Kentucky.

Paul said while association plans are legal here, they are not legal at the federal level, which prevents a lot of groups from negotiating better prices with insurance companies.

“One specific idea I’ve had and I continue to promote — and I talked to the president on the phone again about — is legalizing the ability of individuals to join together to buy their insurance. (Many) don’t realize this, but it’s just not legal to do this,” Paul said.

“There are 2 million fast food restaurants — and we can talk about whether that’s a good idea or a bad idea — but there are 2 million fast food restaurants in our country. About 15 million people work in them and these are our low-wage earners, many of whom don’t have insurance. If we want to help people who work at McDonald’s and Burger King, how do we help them?” he said. “What I’m proposing is that the Department of Labor (legalize health association plans) and let the National Restaurant Association sell insurance — if they want to; we’re not going to make them, but if they want to.

Paul said legalizing association plans could allow for membership groups such as chambers of commerce and credit unions to offer health insurance plans as a benefit of joining. With around 700,000 members of credit unions in Kentucky alone, such large groups could negotiate far better premiums with insurance companies, he explained.

“I think there’s a great chance it’s going to happen. Nothing fixes all the problems, so it’s not the panacea that all the problems in health care goes away,” he said. “But 28 million people don’t have insurance. Many of them are working-class poor and do work in our fast food restaurants and have low wages. There’s a chance that they would be able to get some insurance.”

Everyone who spoke with Paul during the round table had complaints about the ever-increasing price of health insurance and health care. Financial adviser Tom Tye told Paul he has clients who planned for retirement in their early 60s, but now have to continue working because they can’t afford insurance outside of their employer until they qualify for Medicare.

Sally Davenport, CEO of Ephraim McDowell Health, told Paul reimbursements to the hospital are going down while costs rise. McDowell has to compete with much larger hospital corporations in Lexington for doctors, which also impacts the bottom line of the non-profit hospital, she said. 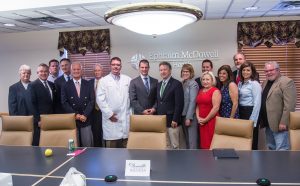 (Ben Kleppinger/ben.kleppinger@amnews.com)
A group of 15 local leaders from the healthcare and business communities met with U.S. Sen. Rand Paul Friday.

Dr. Eric Guerrant, Ephraim McDowell’s ER chief, said regulations currently force a lot of extra paperwork and unnecessary procedures and tests that get in the way of quality care and drive up costs.

Alan White, chairman of Ephraim McDowell’s board, said changes in policy, declining reimbursements and the possibility of the government taking money back really put the squeeze on hospitals and health care providers.

“If this hospital were to go away in its present form, it would make a huge difference in this community,” White said. “It just wouldn’t be the same community.”

Three industries were mentioned during the round table as being ones where profits are high: insurance companies, medical supply companies and pharmaceutical companies.

Besides legalizing association plans, Paul had a couple other ideas for improving the health care situation. President Barack Obama and Democrats were well-intentioned with the Affordable Care Act and truly wanted to make sure people had insurance, he said — but the ACA utterly failed to control costs.

In order to get costs back under control, Paul said he favors some potentially controversial or unpopular ideas — requiring wealthy people to pay the full cost of their Medicare benefits for one, gradually increasing the age for Medicare and Social Security benefits, for another.

“Frankly, if for most of your working career, you made more than $100,000 a year, (you would) pay the full cost of Medicare. There would be a lot of bitching and moaning,” Paul said. “… the bottom line is you’ve got to fix it somehow. … If we don’t do that, we just keep borrowing the money. Medicare is said to be … $35 trillion to $40 trillion in the hole. So this doesn’t get better — it gets worse. So we should make some hard decisions.”

“With Social Security, you fix half the deficit by gradually raising the age to 70. You say ‘I don’t want to work that long’ but it’s like, (otherwise) we destroy the country with a $20 trillion debt, and it’s going to get bigger,” he said. “So we have to do something. I wish I could tell you we’re having an honest debate, but I can tell you neither party is willing to have the debate because they’re afraid that they won’t get elected if they’re honest about that problem. The problem is really bad.”

“There is a strong sort of argument, this egalitarian argument that everybody should get the same. If we keep that, we’re going to run into problems. I think if we allowed something like balance billing, it would help,” he said, adding, “None of this we’re talking about at all in Washington.”

The economic climate in Boyle County has improved to the point that it’s likely going to lose the “enhanced” status... read more