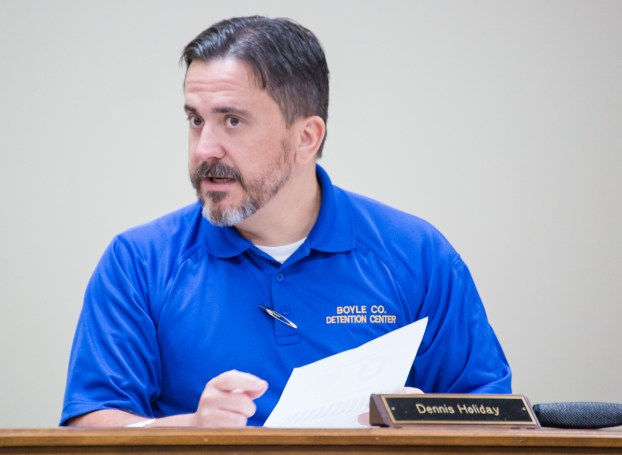 With overcrowding as bad as it is at the Boyle County Detention Center, officials are struggling to keep the staff they have or hire new staff.

Boyle magistrates said last week they would like to see the facility more fully staffed, but were told by Jailer Barry Harmon and Chief Deputy Jailer Brian Wofford there isn’t a simple solution.

Magistrate Phil Sammons said a recent report on the detention center’s condition from the National Institute of Corrections suggests more staff is needed at the jail. He asked Harmon how many more staff the jail could use.

Wofford explained the part-time positions had been created as on-call jobs to help fill in gaps when other deputies are called away or have health problems.

“Nobody wants to work and just be called in,” Wofford said. “They would like to have … a schedule. If there’s no way to schedule them, you’re going to call them and say, ‘hey, we need you,’ and they’re like, ‘we already have something planned.'”

A wide variety of problems affect how many of the jail’s full-time staff are available any given day — deputies get injured on the job, they have to take inmates to the hospital and remain there with them until they come back to the jail, they get sick, they have family issues.

“Last week, 25 percent of our staff was on light duty or (family medical leave) because of major surgeries, major illnesses,” Wofford said. “The week before, we were great — we were fully staffed and everything going. Then we had several get injured; we had another had a parent pass away — you can’t judge it.”

Harmon and Wofford have presented an alternative attendance policy to the fiscal court they say would help with another problem — staff who don’t come in to work just because they don’t feel like it. That policy was tabled by the Joint Jail Committee earlier this month due to concerns it would actually harm management’s ability to deal with problem employees. And on Tuesday, Boyle County Judge-Executive Harold McKinney said there is a potential issue with letting the jail have a different personnel policy from the rest of the county’s departments.

Wofford said a driving force in the jail’s personnel issues is overcrowding. The jail is built to hold 220, but regular has inmate populations of around 360, he said.

“We’re not equipped to handle that many inmates structurally or physically with our staff,” he said. “And the stress level — when they’re having 100 more people cuss at them all day long, it builds up on them. So I can understand why they want to take off — just because of stress.”

Wofford said a “great employee” at the jail just turned in his two-week notice “because they were like, ‘I can’t deal with the stress.'”

“He was like, ‘I can go make more money at nowhere near the stress, and I understand that,” Wofford said.

Magistrate Jack Hendricks asked Harmon if he would present anything formally to the fiscal court telling magistrates that four more full-time employees are needed.

“That’s the only way we’re going to get it done is to hear from you,” Hendricks said.

“All this is new to us, to me. After 15 years of being a jailer, now we’re at the capacity we’re at and we’re seeing the results of it, the stress of it and everything that evolved out of that,” Harmon said. “Staying up, managing it, keeping it together — it’s like on a ship built for 220 people and we’ve got 380.”

“We’ve got to do something to relieve our people out there,” Hendricks said. “I think I’ve been saying this for three years. We’ve got 10 times more out there on them than we should have and they have got be getting worn down.”

Wofford said the jail’s staffing level is set annually and they didn’t know if that could be changed until the next year.

“That was one of the questions we had,” he said.

“We’ve got a situation now that looks to me like we really need to face it,” Sammons said. “We’ve already set it, but rules can be broken. We need to be looking to hire … four more right now.”

“Rules can be changed,” Hendricks offered as a correction to Sammons comment.

McKinney said he will have his office look into “what we can statutorily do” to change the jail staffing level without violating any laws. That issue will be added to the agenda for the next Joint Jail Committee meeting, he said.

Alzheimer’s is a disease that robs the mind while leaving the body — no one knows this better than Kim... read more