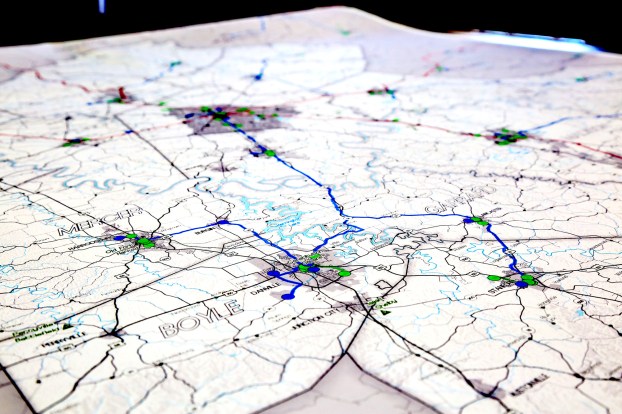 What does the future look like in Boyle County? It’s possible the future looks like a single, coiled cable emerging from the wall of a closet-sized room in the bowels of the Boyle County Courthouse. But it’s not entirely clear when the future it could bring will get here.

The cable is not currently plugged into anything, nor is there anything plugged into the other end. But it represents the first physical presence in the county for a massive, statewide project that aims to bring high-speed internet to even the most rural Kentuckians. 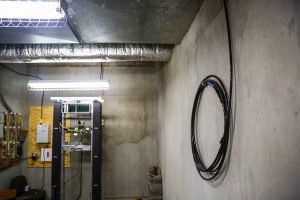 (Ben Kleppinger/ben.kleppinger@amnews.com)
A coiled fiber-optic cable labeled as part of the KentuckyWired broadband internet project hangs on the wall in a room in the basement of the Boyle County Courthouse.

KentuckyWired is a public-private partnership (PPP) project, which aims to build a fiber-optic cable infrastructure reaching into every county in the state. Criss-crossing highways of cables would stretch from east to west and north to south, with smaller branches reaching out to areas not immediately on those highways.

The project is financed with a $30 million general fund appropriation, a $23.5 million federal grant and $270.9 million in private bond funds, for a total estimated cost of $324.4 million, according to kentuckywired.ky.gov.

Why is the state undertaking such a massive project?

“Unfortunately, Kentucky ranks 47th in the country in broadband speeds and capacity. This puts Kentucky as a major disadvantage for attracting and growing new job and education opportunities for an improved way of life,” according to information from KentuckyWired. “Broadband, like electricity, water and sewer, is now an essential utility service. However, it has been too expensive for private carriers to build out a high-speed, high-capacity network across the entire state.

“Having access to high-speed internet is critical to our business community,” said Paula Fowler, executive director of the Danville-Boyle County Chamber of Commerce. “That’s the wave of the future. If we want to grow home-based and telecommuting businesses, we have to have the latest in fiber-optic technology here.”

“We look at it as providing opportunities,” said Shane New, director of community planning for the Bluegrass Area Development District and a member of the district’s KentuckyWired committee.

High-speed internet has the potential to greatly benefit rural areas that may have suffered from socio-economic issues for decades, New said. The kind of internet speeds that KentuckyWired would deliver to rural Boyle County would make it possible for students there to participate fully during non-traditional school days; it could enable employment by allowing people to work from home; it could even connect elderly people with their doctors.

“That’s an opportunity for those folks to get online with their doctor, tell them what the problem might be — without having to make a trip into town,” he said. “… If we can get broadband out there to them … it is like water in that sense — that we want to be able to provide those same things in the rural areas that they get inside the city.”

And so, the coiled wire labeled “KentuckyWired” in the courthouse’s server room represents many possibilities for the future — but it’s not clear when it will arrive, said Bill Nichols, director of information technology for Boyle County.

Workers with KentuckyWired came to Boyle County several months ago and installed a length of fiber optic cable from a new box in the ground along North Fourth Street underground and into the basement of the courthouse, Nichols said. Whenever fiber-optic cable is run all the way to the utility poles outside of the courthouse, it will then be dropped down to the box, labeled “KentuckyWired” on top, and the cable in the courthouse’s basement will become a light speed connection to the rest of the world. 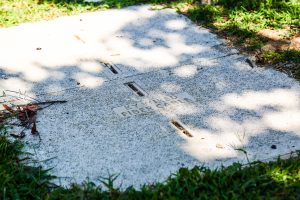 (Ben Kleppinger/ben.kleppinger@amnews.com)
An underground box outside the Boyle County Courthouse is where fiber-optic cables currently end.

“At this point, the best I’ve heard is we’re anywhere from two to three years away from having this type of service,” Nichols said.

But the project isn’t done once the courthouse — and potentially several other public spots in Boyle County — are hooked up. That will represent completion of the “middle mile” of the fiber-optic network, Nichols said. Building the “last mile” from access points like the courthouse out into rural areas will require additional work.

That could mean local internet service providers will build the additional lines so they can charge customers for high-speed internet. It’s also possible for governments to build out the networks further themselves, Nichols said.

Clark said “2018 to 2020” has been mentioned as a goal for completing the “middle mile’ infrastructure. But New said leaders on the project have also “stayed kind of vague” in order to give themselves “wiggle room.”

Clark said the development district’s KentuckyWired committee is ready to assist local governments and offer recommendations if they need to take action or potentially spend any funds on the project. But so far, there isn’t anything for local governments to do.

“It’s hard to wrap our brains around this when we feel like there’s still a whole lot of unknowns around KentuckyWired,” Clark said. “It’s hard to plan right now.” 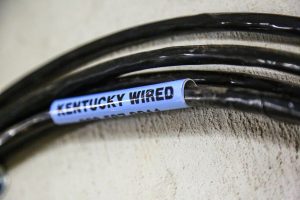 (Ben Kleppinger/ben.kleppinger@amnews.com)
A coiled fiber-optic cable labeled as part of the KentuckyWired broadband internet project hangs on the wall in a room in the basement of the Boyle County Courthouse.

Clark said right now, KentuckyWired leaders are hung up on obtaining “pole attachment agreements” from utility companies that own the poles the project will use to run its fiber-optic cables.

“They say there’s over 85,000 utility poles that they have to do pole attachment agreements for and they are still working through those,” he said.

Once KentuckyWired is really in Boyle County, getting the “last mile” built into some of Boyle County’s most remote communities may prove difficult, Chamber Director Fowler said.

“We have to figure out a way to give the AT&Ts of the world a return on their investment,” she said. “Because they’re not going to go into Forkland or Mitchellsburg for 10 customers. They’re just not going to do it … that’s going to be part of the challenge.”

New said the development district’s committee is intent on getting KentuckyWired’s high-speed internet access to “every place that it is financially feasible.” 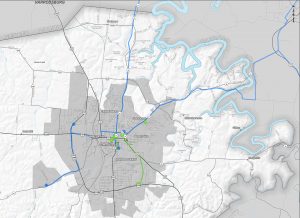 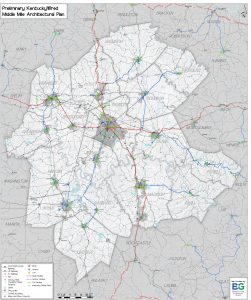 As the sun glowed through a blanket of fog in downtown Danville Friday morning and people hurried to work and... read more