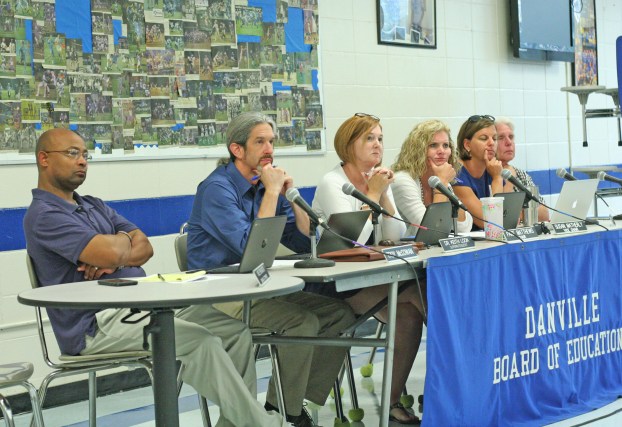 Kendra Peek/kendra.peek@amnews.com A photo from the July 24 meeting of the Danville Board of Education.

The Danville Board of Education approved the final version of the $28.2 million budget for the current fiscal year on Monday night; $22.8 million makes up the general fund.

“The budget is an ever-evolving document. This is our final installment for the fiscal year 2018,” said Paul Dean, director of finance for the Danville Schools.

The district has approved two or three other versions; Dean said it was normal to do so before reaching the final budget in the fall.

The budget includes a 1-percent raise for all certified and classified staff and a one-to-one Chromebook initiative to get a laptop into the hands of every student at the John W. Bate Middle School.

Every district is required to maintain a contingency of 2 percent; the Danville budget has a contingency fund of $2.3 million — about 8 percent of the budget.

From last year’s budget to this year’s, there is an overall increase of $115,335 in federal grants to the district, including a $45,643 decrease in preschool funding.

There is also a $25,383 decrease in state grants to the district, with a potential of more being cut:

• Funding from the Kentucky Educational Collaborative for State Agency Children, which focuses on children in the custody or supervision of the Commonwealth, decreased by $972.

• Funding for the Youth Services Center and the Family Resource Center each decreased by $504.

However, funding for the Gifted and Talented program remained the same, at $19,955.

“I’m surprised by (the decrease in preschool),” Dean said.

The board also learned that there is an increase in preschool students this year, and approved a request to open and staff another classroom.

“It’s never a bad thing to increase preschool enrollment,” said Superintendent Keith Look. He said the district’s preschool dollars are running out and this addition should max out the budget.

If any more adjustments have to be made, he said, the funds will have to come from the general fund.

“If a student qualifies, we must serve them,” Look said, when asked if all students who qualify have to be served. “If there’s busload of more kids that qualify, we will figure out where to put them.”

Children qualify for preschool based on family income and a diagnosed disability, Look said.

Andrea Craft, director of preschool for Danville Schools, said they had hoped to accept some tuition students this year, but “it doesn’t appear that’s going to happen.”

Look was asked by board members if the influx was relating to the law change, which requires kindergarteners to be six by Aug. 1. He said there were 15 who had been caught by the law. Look said many factors contributed to the spike in attendance and he doesn’t believe the change in the law created the spike.

After coming off of one of its best years yet, the Great American Brass Band Festival has named its new... read more