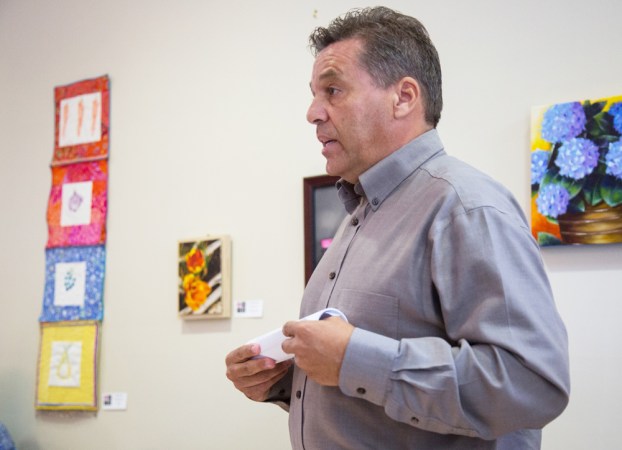 How P&Z operates “not acceptable to me,” P&Z director says

A sea change is on its way for planning and zoning in Boyle County if new P&Z Director Steve Hunter gets his way. And some members of the Danville-Boyle County Economic Development Partnership hope he gets his way.

Hunter attended the EDP’s board meeting Tuesday, theoretically to introduce himself and exchange pleasantries, as new officials often do. But the pleasantries were disposed of with haste as Hunter jumped in on what he called a “sensitive issue” — the current way the county planning and zoning rules and regulations function.

“What I walked into — I’m not happy with right now. What I’ve seen in our office and how we do things is not acceptable to me, personally,” Hunter said. “… It’s kind of a honeymoon period and I’ve told people that. We’re going to have to implement some changes in my office or I’m just going to do something different. I didn’t come here to be this kind of planning director after doing it a different way.”

Hunter said he’s been told by some people in Boyle County to stop mentioning how he did things in Bowling Green, when he was the director of the Warren County Planning Commission. But he’s going to talk about Bowling Green anyway, he said.

Bowling Green is a very successful community from an economic development perspective and Danville could learn a lot from how it transformed its planning and zoning operations, Hunter said.

In Bowling Green, the planning commission conducts permit reviews locally instead of sending them off to the state. That allows for a much quicker turnaround, letting builders get to work faster. Hunter’s former planning commission also lets a lot more processes and paperwork be handled by staff and only brings important or controversial items to the commission for approval. And Bowling Green’s fees are kept far lower than Danville-Boyle County’s.

Hunter said most of P&Z’s foundational documents are “flawed” or incomplete from his perspective.

Hunter said Danville and Bowling Green both happened to adopt new zoning ordinances in 2004, but Danville’s looks a lot like Bowling Green’s did in the 1970s.

Adopting just a few of the strategies from Bowling Green’s ordinance would add a lot of flexibility and prevent projects from getting bogged down in regulations, Hunter said.

A new comprehensive plan for Danville-Boyle County was just finalized in March of this year, but Hunter said he thinks it’s already time for an update. The plan doesn’t include flexibility for areas along the bypass, so instead of allowing for commercial or industrial development in a “flex” zone, the areas are defined only for commercial or industrial uses, he said. And there is no method in the plan to allow for modifications.

Hunter said he believes the comprehensive plan could be updated in a way that maintains “smart growth” strategies.

“I don’t know any planning commissions that are charging 20 cents a square foot for a zoning permit … that is unique to Danville,” Hunter said. “That’s not business friendly.”

Hunter said the way P&Z works right now, all projects go through a site plan review and zoning review. “Everyone gets hit with both processes every single time.”

Instead, new rules should be put in place about when site plan reviews or zoning reviews are triggered, so that in many cases, projects won’t have to make it through so many steps.

Hunter said the P&Z board is supportive of him, but some may be nervous about losing revenue by reducing fees.

“It’s time to think about what I think is fair for the public in these fees and these processes, and then work backwards for staff and whatever we do,” Hunter said.

Danville Mayor Mike Perros told Hunter “if you need extra funding to make up the difference on fee reduction, we’re open to that suggestion.”

“I think the city and the county give us adequate fees at this point,” Hunter said.

Hunter said he guided Bowling Green through a transformation away from “old school” thinking on planning and zoning, so he’s qualified to undertake a similar path here in Boyle County. Today, Bowling Green has more jobs than it knows what to do with — there are some 5,000 jobs open in the area, he said. That’s in part because the planning commission helped make it possible for growth to occur very quickly over a short number of years, he said.

“We’re excited you’re here. We want to help you help us,” Nelson said. “And I hope you’ll feel welcome to attend our meetings and participate, because we think what you’re thinking about and working on is a big part of our equation to help this community be successful.”

The Boyle County Fire Department is the first to take a stand on where they want their 911 calls to... read more