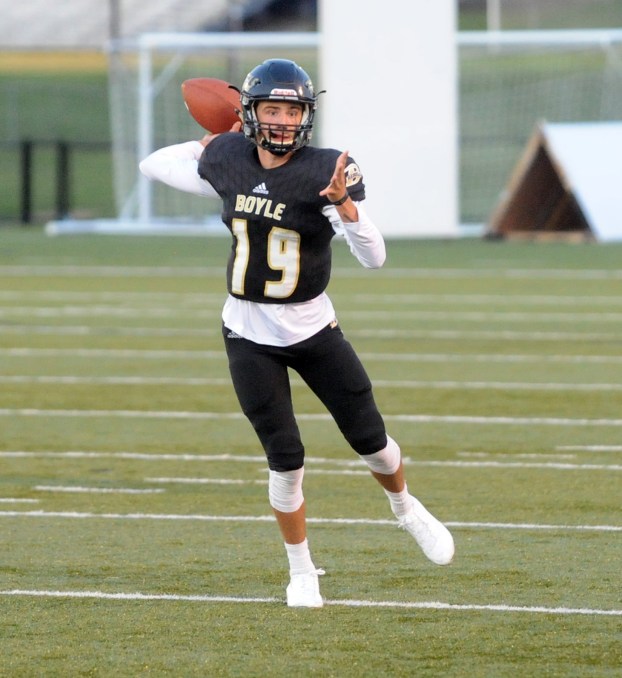 Lanter siblings leading Boyle County at quarterback on every level

The future at quarterback for Boyle County?

Chances are it’s a Lanter.

Reed got his start in first grade, and from day one he knew he wanted to be a quarterback.

“I just remember when I was little I loved watching football,” Reed said. “I started playing football when I was in first grade, and I’ve just loved it ever since. I used to throw back and forth with my dad and I just wanted to play quarterback. That’s what I wanted to be.”

Cole followed in Reed’s footsteps and now Trey is doing the same. Cook Lanter, a fourth-grader, is a tight-end for the Woodlawn team.

Even though their father, Tim, didn’t play, the Lanters are all about football.

“They’re a real good family,” high-school head coach Chuck Smith said. “They love football, they’re eat up with football and it shows on the field. They love it. They’re gym rats, they can’t get enough of it.”

The stats are backing up the Lanters this season: Reed has led the Rebels to a 4-1 record so far this year. He’s completed 75-of-115 passes on the year, thrown for 981 yards and 11 touchdowns.

Cole has helped the high-flying Eagles to a 6-0 record and 52.5 points per game. He’s thrown 12 touchdowns, ran for three and caught two. He also has an interception.

“He has the ability to play multiple positions,” middle school head coach Quinn Givhan said. “I think he’s an excellent receiver and quarterback could be in the future. He’ll find a way onto the field, it won’t take him until his senior year to be on the field, that’s for sure. Freshman year, that’s a different beast just because of the maturation and physicality of it. But he’s a strong, athletic kid that can do lots of things on the field.” 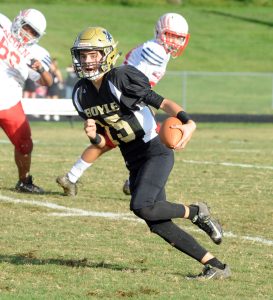 Reed said he’s made it a point to prove his place since the Danville game, the Rebels’ only loss this season. He’s thrown three interceptions this season, all coming in the game at Admiral Stadium.

“Since Danville, I think I have stepped up,” Reed said. “That was the first game that I started that was really intense and that physical. I had high nerves because there was a lot of people there. But after these last two games, I wanted to come out and make a statement because I feel like there were doubts about me performing. I just turned up my intensity in practice and got it done in the past two weeks.”

In the two games after Danville, Boyle has put up 83 points. Reed has thrown for six touchdowns and 478 yards in the two wins.

“I think he’s getting better every game,” coach Smith said. “He understands what his role is, he understands after his Danville game, you can’t turn the ball over and expect to win. I think that being a sophomore, what he’s got to do for us is be able to manage the game, be in control of the game and get the ball to our skilled players and let them do their thing. I think he’s done a good job of that since the Danville game.”

If Reed can do something better, Cole is there to let him know. The two have a competitive relationship at home, but they’re each other’s biggest fan.

“He’s one of my biggest fans, my whole family is,” Reed said. “He knows the game, he knows what he’s looking at out there. I need it from somebody around the house, and I like that he can give it to me. He knows that he can’t get mad at me because I’ll get mad at him back. Brotherly love.”

Cole said Reed was the main reason he wanted to get into football at an early age.

“He’s the one that got me into football,” Cole said. “Watching him and my dad, watching him growing up playing, so as soon as I got into first grade, I wanted to follow after big brother and carry on the name of the family.”

Cole is one of a handful of middle school players who genuinely enjoy watching film and love the game of football, coach Givhan said. His joy in the game might be his best quality.

“He knows the game of football,” coach Givhan said. “He knows what everybody is supposed to do on the field, so his leadership comes in handy if there’s any kind of confusion, from any person, he can get them in the right position so we don’t have any wasted or busted plays.

That knowledge of the game comes in handy when he’s talking with his brother after a high-school game.

“I don’t really yell because I know I wouldn’t want to be yelled at,” Cole said. “But I’ll always tell him something when he gets home, ‘don’t worry about it, get the next ball,’ because there’s always another opportunity. Just play each play like it’s your last.”

Cole’s one of the leaders of the middle school team, coach Givhan said. And he’s always willing to help teammates find their way.

“I feel like, if I don’t get something done, people will look toward me to get it done, or if they’re struggling I’ll try to pick them up,” Cole said. “I do my best in practice and in games to talk to them and encourage them. If they screw up or if I screw up, I’ll take the blame, tell them what they need to do and make sure we’re on the right path to succeed.”

Reed frequents the middle school sidelines — the Eagles have their eighth-grade night at the Centre College football field tonight.

“I’ll make sure I’m the first person on the sideline, letting him know what he needs to know,” Reed said. “I won’t get on him but I’ll tell him, ‘check this,’ or ‘look over here.’

So, what happens next year when Reed and Cole are both on the high school team?

“He gives me crap all the time about it, he says he’s going to start four years,” Reed said. “I think he’s the better athlete, he can run, he can jump better than I could at that age. But I think I can throw the football better.”

Cole agrees — but he was quick to put in a jab at his brother.

“I think I’m the better athlete overall, but at quarterback, he’s got the better arm,” Cole said. “But he’s got to enjoy this year while it lasts.”

It’s the same way at home. Reed said when they play basketball or a one-on-one game of anything, “it usually ends in a fight.”

“I remember all the time, my dad used to get on me, ‘you’ve got to let the little brother win sometimes,’” Reed said. “I just can’t do it. He’s getting better, he used to not be able to put up a fight. In everything we do, he’s starting to get up there with his athleticism.”

Like coach Givhan said, that athleticism will help Cole find the field, even if he can’t dethrone his brother at the quarterback spot.

“I tell you what, his little brother is really good,” coach Smith said. “Cole is a nice athlete and he does a great job, he’s a good quarterback. Boyle County won’t have to worry about a quarterback for a long time.”

Rebels dominate line of scrimmage for big win at Collins

SHELBYVILLE – Boyle County may not have looked sharp in every area or at all times, but the Rebels got... read more