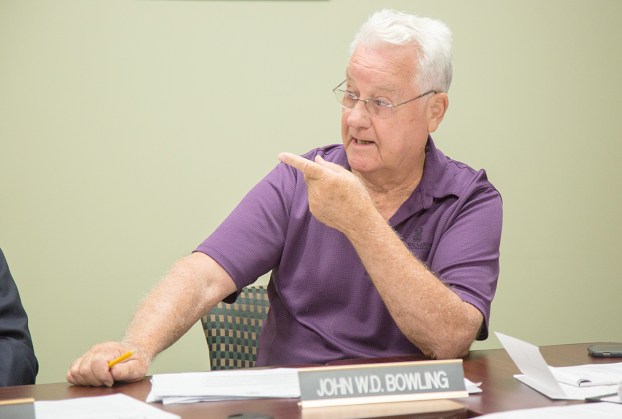 Ben Kleppinger/ben.kleppinger@amnews.com John W.D. Bowling, a member of the Architectural Heritage Board, opposes requiring Centre College to do anything concerning a screen between a parking lot and Fifth Street during Wednesday's board meeting.

No one happy with compromise on Fifth Street parking lot

No one is getting what they want along the edge of a Centre College parking lot on Fifth Street.

A compromise of sorts was reached on screening the parking lot from the street during Wednesday’s Danville Architectural Heritage Board meeting. By a vote of 3-2, the AHB allowed Centre College to alter plans for a hedge or brick wall and instead plant a pair of trees.

Centre received approval from the AHB in 2014 to construct the parking lot, which now sits at the corner of Fifth and Main streets, with a brick-and-iron screening and some green space along the Main-Street side. The approval allowed Centre to move a historic building and included a requirement for a hedge along Fifth Street, due to the historic district’s design guidelines, which state “if parking abuts a street, it should be screened from view by landscaping and/or a low brick wall.”

But Centre never constructed the hedge or a wall between the parking lot and Fifth Street.

James Leahey, vice president for legal affairs and gift planning at Centre College, visited the AHB in July to ask for relief to leave the parking lot as it is — with a thin strip of grass between it and the Fifth Street sidewalk. The AHB refused to grant the request, leaving in place the requirement for a screen.

Leahey returned to the AHB Wednesday with a compromise proposal to plant two trees along strip of grass.

“Even though we don’t really desire to have additional landscaping up there, we will do that,” he said.

Leahey and AHB members rehashed the same arguments made in July:

Leahey said the parking lot would be made less safe by adding a screen, and Police Chief Tony Gray has told him he would rather not have a screen blocking visibility into the lot.

A screen planted or built in the narrow strip of grass would also shrink the space available to pedestrians on Fifth Street, due to parking on that street added since Centre’s parking lot project was first approved, Leahey said.

AHB members noted Centre already agreed to put a hedge in, and many other downtown property owners have been required to screen their parking lots already. AHB member Julie Wagner said it appears from reading AHB minutes that Centre agreed to screen the parking lot from the Fifth-Street side in exchange for being allowed to move a historic building that had been on the property.

Leahey said situations have changed since Centre was first approved — the danger of screening the lot is now clear and there wasn’t previously parking along Fifth Street.

A big change from the July meeting was the presence of AHB member John Bowling, who had been absent several months due to health issues.

Bowling said he thinks requiring Centre to put in a screen is ridiculous.

“I think what you all have done to that corner is impeccable compared to what it used to be,” he said. “Yes, you all said that you all would put a hedge down Fifth Street, and I think that’s admirable. But I agree that the hedge does not need to be there.”

Bowling said he has “a real concern” about planting the two trees as a compromise. Trees could attract birds, which could defecate on vehicles; and tree roots could eventually damage sidewalks or the parking lot, he said.

“I would propose to this committee that we leave it just like it is now, with simply the grass strip down through there,” Bowling said. “It’s easier to take care of maintenance-wise; I think it looks attractive. Sure, they agreed to do that, but if we can’t bend a little bit and use common sense to work with these people, then I think that’s a problem with us.”

Bowling “urged” the AHB to give Centre permission to “keep it exactly like it is.”

“I think putting two trees in there … is nothing more than to pacify us,” Bowling said, generating an appreciative laugh from Leahey. “I don’t think that should be. So I’m not going to support the two trees.” 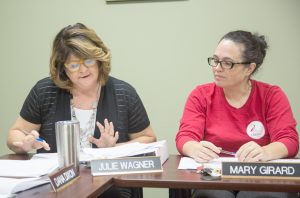 Ben Kleppinger/ben.kleppinger@amnews.com
During Wednesday’s meeting, Architectural Heritage Board member Julie Wagner, left, opposes allowing Centre College to back out of its previous agreement to create a screen between a parking lot and Fifth Street. AHB member Mary Girard, right, eventually made a motion to accept a compromise plan involving the planting of two trees. The motion passed 3-2.

Later in the meeting, AHB member Mary Girard had Wagner read the specific section of the design guidelines stating that parking lots “should” be screened. The use of “should” rather than a stricter word does give the AHB the “wiggle room” to deviate from the guideline, Girard said.

Debate continued until AHB member Dana Dixon interjected a motion — to approve Centre’s proposed compromise and require the college to plant two trees, rather than the hedge it originally agreed to.

Girard seconded the motion. Dixon, Girard and AHB Chair Tom Tye voted in favor; Wagner and Bowling voted no — but for very different reasons. Bowling was opposed to requiring Centre to do anything; Wagner said she wanted to leave the original requirement for a screen in place.

The approval didn’t bring an end to the discussion.

“Not anybody here is particularly happy with this resolution, however it suits the needs of the paperwork which you all have authored,” Girard told Leahey.

“Thank you,” Leahey said with a laugh.

Girard said she talked to the Boyle County Public Library director about screening of the library’s parking lots and public safety.

“Every single issue has been with our buildings, and not with our screenings along the roads,” she said.

“I think I’ve had conversations with the city’s police chief, who says otherwise,” Leahey said.

“This is probably inappropriate, but sometimes I think police chiefs make remarks that make their job easier, rather than that makes people safe,” Dixon said.

“Well, I won’t cause you all to say more things like that,” Leahey said. “I’ll sit down.”

The lot was constructed on top of multiple properties acquired by Centre, where Bob’s Quickstop gas station and several houses used to stand, according to news archives.

The land has environmental problems due to leaks from underground gas tanks, according to archives, but is still zoned commercial and Centre anticipates it could some day be developed again.

In 2014, Leahey was quoted in The Advocate-Messenger that the parking lot allows for remediation of the environmental issues with the land over time.

“In time, the contaminants will break down and dissipate from the soil, and the property will be available for development, either or both by Centre or another person,” Leahey said at the time. “In the meantime, and until someone comes forward with an attractive building idea, this parking lot will render the property more attractive for the surrounding neighborhood and useful for Centre and the community.”

Leahey said Wednesday that Centre still talks with potential buyers from time to time who may be interested in developing the property.

STANFORD — A man is facing several charges after he fled from police on horseback Sunday night in Stanford and... read more