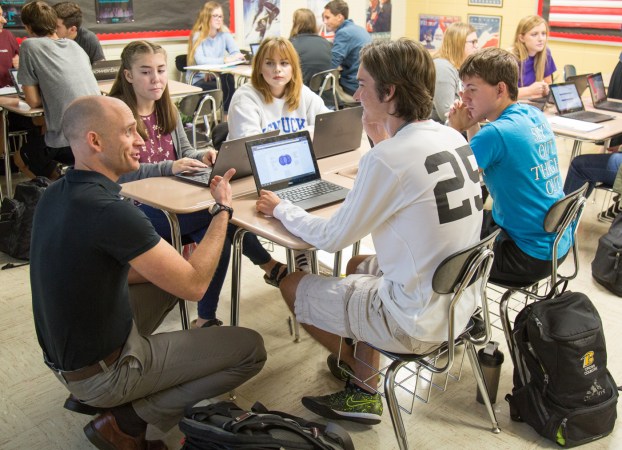 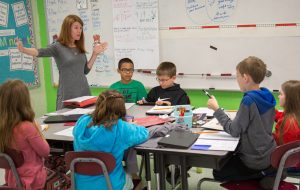 A small group of Boyle County teachers are embarking into new educational territory for the school district by flipping the script and getting students to ask the questions.

“Most of the questions that are asked come from the teacher, and it may involve questions that students don’t really care about,” said Ryan New, a social studies teacher at Boyle County High School who is spearheading a pilot program of 11 teachers using “inquiry” techniques in their classrooms. “The question is how do we get students to be able to ask their own questions in class?”

The strategies of inquiry teaching, New explained recently to the Boyle County Board of Education, involve posing a big question and then getting students to go through tasks and analyze sources as they try to find an answer on their own. 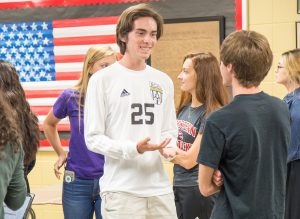 “Inquiry teaching is a process, rather than content-oriented. It is conceptual instead of factual in emphasis. It is student-centered, not teacher centered. It is active, not passive,” New said. “Inquiry teaching does not treat content as an end in itself, but rather uses it to accomplish purposes of far-reaching significance.”

Those “purposes of far-reaching significance” include better preparing students for college and work — whatever they might be doing after school.

“Forever in education, we always talk about trying to make the learning relevant, trying to make it real-world,” said David Young, assistant superintendent. “A lot of times when you get that question right, it drives it, it gives everything context. And a lot of times, that context is real-world … that’s what we all do every day, so it’s a very real-world skill for kids to be able to learn and do it in class.” 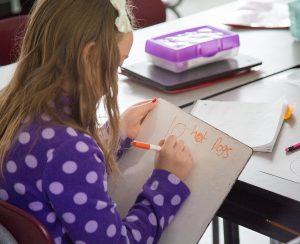 New said inquiry methods of teaching have been around for about 100 years. But “the problem is its implementation — it takes a lot of persistence to do it.”

For one thing, teachers have to learn how to take themselves out of the spotlight.

“Part of my goal in the classroom is to limit the amount of time that I speak,” New said. “If a teacher speaks for five minutes, yet students are able to articulate quite well what it is they’ve learned and how it is that it applies to their life, based on the questions that they’ve asked and their classmates have asked, I think that puts them in a lot better spot of being successful, specifically when they go to college, but also as citizens and in other areas.”

Something else teachers have to get used to with inquiry is when students come up with better questions than the teachers did in the first place. 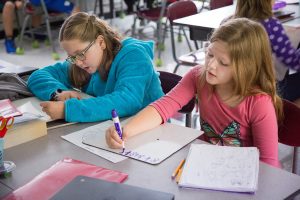 “It’s a process that makes me feel stupid every day, and I welcome that,” New said.

New said he’s seen students come up with better answers than he could in his social studies class, and other teachers participating in the pilot program — which includes all grade levels and many different content areas — have as well.

New said Crystin Moore, a fourth-grade teacher at Junction City Elementary, told him now that she’s using inquiry, her students “better understand why it is that we’re doing the things that we do and they’re actively seeking out real-world instances where these things can be applied.”

“If fourth-grade students are doing that, that’s fantastic,” New said.

Moore used inquiry in her classroom Monday, as she taught her students about estimating and rounding. Students worked together to come up with strategies for estimating how many colorful chips were in a clear container; and how many hot dogs a world-champion hot-dog eater might be able to consume in 10 minutes. 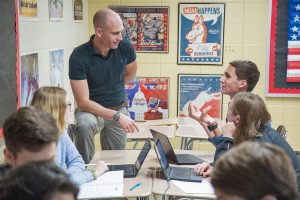 In New’s social studies class last week, students learned the theory behind separation of governmental powers between state and federal levels, and debated which powers were more appropriate to give to which level of government.

New said Moore spent 10 hours at one point trying to come up with a good question to ask students about patterns; in the classroom, students figured out the best question in a matter of seconds.

“Students are able to do this 10 times better than what we are, because it actually has some meaning to them,” New said. “It’s not us trying to sort of guess what they want; it’s actually involving them in the process.”

Superintendent Mike LaFavers said inquiry is the newest step forward on Boyle County’s “blueprint” for making sure students are absorbing what they’re being taught. Boyle added co-teachers around 2009; then project-based learning to help address critical thinking skills in 2014; and now the inquiry pilot program this year.

“It’s not like we’re stopping and doing something different,” LaFavers said. “This is simply an evolution of who we are.” 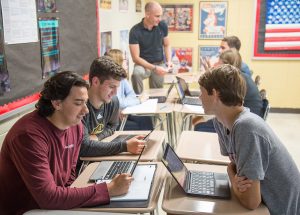 LaFavers noted one concern that has been voiced is “if you dive into inquiry, if you dive into project-based learning, you can’t get test scores — kids won’t perform well on the ACT.”

LaFavers said Boyle is proving that’s not the case — New, who used inquiry methods in his classroom prior to the pilot program this year, had a 95-percent pass rate on AP exams last year.

Young said New is checking up with the other teachers in the pilot program regularly, and all 11 teachers are meeting together monthly to learn from each other as they go.

New said inquiry boils down to students “taking ownership” of their learning.

At the age of 26, a 2009 Mercer County graduate is in a career that he once thought unattainable. “No... read more