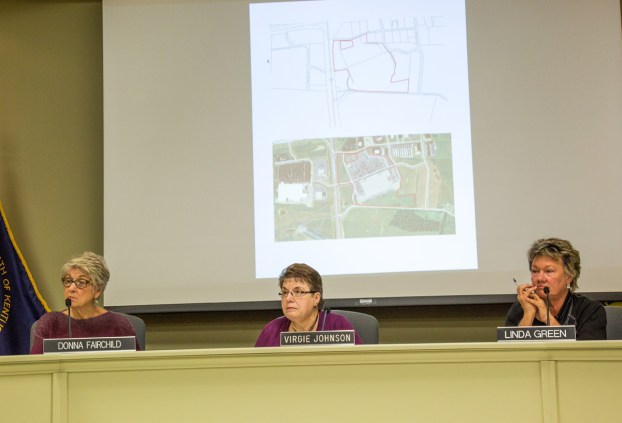 (Ben Kleppinger/ben.kleppinger@amnews.com) From left, Board of Adjustments members Donna Fairchild, Virgie Johnson and Linda Green ask questions about a conditional-use permit for the Danville Walmart during Thursday's board meeting. A map showing the Walmart land is displayed on a screen behind them.

Danville’s Walmart has secured an additional approval from the local Board of Adjustments for its planned liquor store addition.
The conditional-use permit may not be absolutely necessary, but ensures for Walmart that all its bases are covered legally, said Steve Hunter, director of Danville-Boyle County Planning and Zoning.
Walmart plans to build a 5,077-square-foot addition onto the front right corner of its Danville location and open a liquor store with a separate entrance from the main store next year.
Hunter said Walmart’s attorneys studied local planning and zoning laws and discovered an “odd little provision” that only applies to commercially zoned buildings over 50,000 square feet in size.
“It was added years later after Walmart was approved (and it) says we no longer build buildings in Danville-Boyle County over 50,000 square feet in the (highway commercial) district without first getting a conditional-use permit,” Hunter said, noting other districts such as industrial do not have the same requirement. “What happened when that was passed — it made a lot of these buildings non-conforming. Lowe’s is across the street, the shopping center across the street … anything over 50,000 (square feet) right now, I guess, became non-conforming with this provision being added.”
Walmart’s planned addition is just over 5,000 square feet, but because it’s being built onto the main building that’s already over 50,000 square feet, it potentially triggers a strange situation where the building is conforming to the rules in terms of its use, but not in terms of its size, Hunter said.
There’s also some language in the laws that might make it OK for Walmart to build the addition without a conditional-use permit, as long as there’s no change in the use of the land, Hunter noted.
“In my opinion, it was up to them if they wanted to file,” he said. “This just buttons everything up for their legal department before they begin their expansion.”
Hunter said the rule essentially prohibiting 50,000-square-foot buildings may have been a product of city-planning culture around the turn of the century.
“In the late 90s and early 2000s, it was kind of in vogue for planners to be against big boxes,” Hunter said. “You saw ordinances all over the country where they just thought, ‘hey, big boxes aren’t good things to have in your town’ … so a lot of communities put standards in saying we want smaller boxes.”
Hunter said that led to developers constructing numerous smaller buildings and connecting them with breezeways. “And then you saw weird little shopping centers that were different,” he said.
“I think the goal over time was to make sure these big boxes were more attractive. Other communities then started to put standards in their books on how facades looked, or that they be brick, or what-not. I think that’s how, down the road, other towns got ‘pretty Walmarts’ or ‘pretty Krogers,'” Hunter said. “But for a long time, it was just, ‘hey, let’s roll the cap down and then we’ll never see a Target come to our town. I think that’s what happened across the country from the planning side. … At one point, we all hated big boxes, I guess.”
The Board of Adjustments voted unanimously to approve a conditional-use permit for Walmart, after verifying that the construction wouldn’t affect stormwater drainage.
Walmart gained approval for the site plan for its liquor store from the Planning and Zoning Commission in early October. Before the planned opening for the store in 2018, Walmart will need to obtain one of the six existing package liquor licenses allotted to Danville, all six of which were held by open businesses when the site plan was approved.
You Might Like

EDP may offer confidential info as reward for investing

The Danville-Boyle County Economic Development Partnership needs $30,000 from private investors this year in order to pay for all of... read more