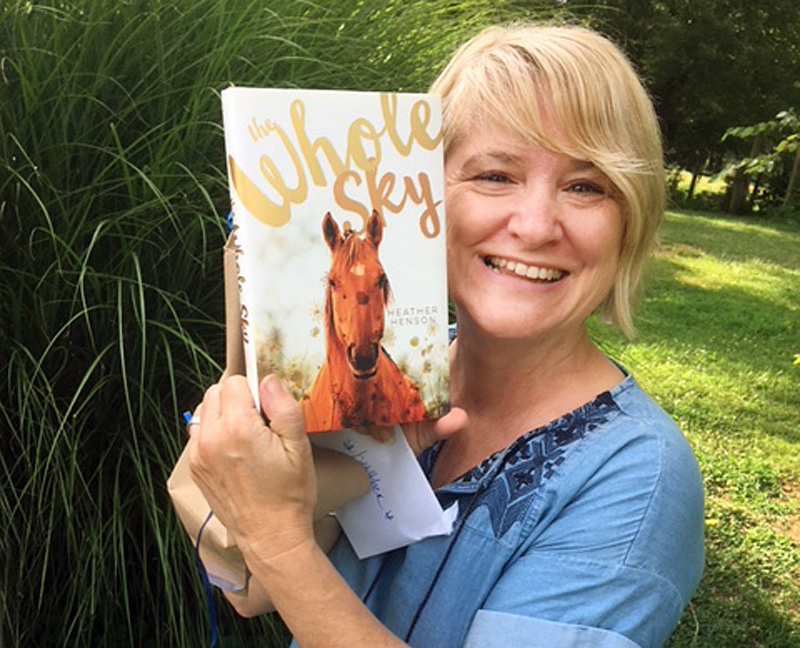 Photo contributed Heather Henson gets a picture taken just after opening her first copy of "The Whole Sky" she received in the mail from her editor. "I adore the finished product," Henson says.

The language of the Equus

Heather Henson can site various inspirations for her new book for middle school readers, “The Whole Sky.” Her second book involving horses, it’s not a true story — but was inspired by true events.

Back in 2001, more than 500 thoroughbred foals died on farms in Kentucky from Mare Reproductive Loss Syndrome (MRLS), with the cause of it a mystery for a long time.

“As far as I know, there was no one person (like Sky Doran, the main character in the book) who ultimately helped connect the dots and solve the MRLS mystery; there was no one girl who talked to horses,” Henson says. “But I’m a writer, so I like to imagine that there was — or is.”

One of the reasons Henson began writing about horses — her first book about them was published in 2010, “Dream of Night,”  also for middle school readers — is actually because her editor suggested it.

“I’d just moved home to Kentucky after living in New York City and Brooklyn for 17 years, and I was talking to my editor at Atheneum/Simon and Schuster about book ideas and also describing living on a farm and seeing horses every day —so different from my city life.  She suggested that I think about writing a novel that was literary but would also appeal to young horse lovers.  She felt that since I had moved back to the middle of horse country I would be able to tap into that world, and she was right.”

So Henson says she had already done a lot of research for her first book “Dream of Night” in order to write in the “voice” of a horse. She learned from that experience, and even had the idea for “The Whole Sky” as she wrote the first one, which was about an ex-racehorse and foster child who had both been abused and the foster mother who took them in.

“But then, as often happens with me, one book took hold and began to dominate my time. I felt like I had to finish ‘Dream of Night’ first.”

At the time, she says her family’s neighbor had about a dozen horses in the field right beside her house, and the whole herd would gallop past. “It was a breathtaking sight, visually inspiring.”

She later learned that the neighbor had rescued most of those horses from bad situations, and she became really interested in how racehorses, even ones who’ve won a lot of races, can end up being abused and living in terrible conditions.

“Through my research, I met several horse rescuers. One of them was Susanna Thomas, who is now the executive director of the Maker’s Mark Secretariat Center at the Kentucky Horse Park, which works to re-school ex-racehorses and find them new homes.”

Henson says Thomas was pivotal in her writing about horses at that point — Henson took riding lessons from her and picked her brain about what she called “the language of the Equus.”

Henson had originally envisioned “The Whole Sky” as a “horse whisperer” for middle school readers. She knew she wanted the main character, a young girl named Sky, to be able to communicate with horses in a literal way, but wasn’t sure what direction the story would take. 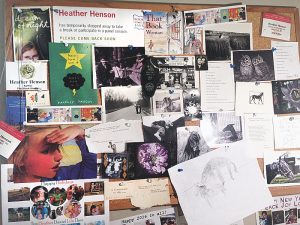 Photo contributed
A photo of Heather Henson’s story board, a bulletin board above the desk where she works. “I always put up photos that inspire what I’m writing about at the time, and at this point I had lots of horse photos.”

“I also had in the back of my brain something I’d heard about before I’d returned to live in Kentucky — how over 500 thoroughbred foals had died one foaling season (in 2001) in and around Lexington.  I remember reading about it in the New York Times back then, and I remember my dad talking about it.  It was a huge mystery as to what had caused the deaths, but it was somehow tied to an unusually crazy infestation of the eastern tent caterpillar.  As it happens, I’d been home from New York visiting during that infestation, and because I actually have a huge bug phobia, I’d been completely grossed out by the sheer number of caterpillars everywhere.  The two stories started coming together for me — the mystery surrounding the deaths of so many foals in one season and how one young girl might be able to help solve the mystery because she can talk to horses.”

Henson wanted the young narrator to work at a pristine thoroughbred horse farm, so she began researching that world. She became friends with Robin and Pete Cline when she and her family first moved back to Kentucky because their kids went to the same school. Pete Cline manages Shawnee Farm in Mercer County, a top broodmare operation owned by Sally and Watts Humphrey. “I started asking Pete lots of questions and coming to visit the farm. Pete and his staff were so helpful — they would call me in the middle of the night, when most foals are born, and I was able to really get the feel of having to wake up from a deep sleep and rush to the barn and witness what could be a long or short birth. It was truly inspiring — I couldn’t have gotten so deeply into Sky’s head without help from the folks at Shawnee.”

Even with as much inspiration that seemed to charmingly surround her, Henson says the book took a lot longer than originally envisioned.

“A lot of times, kids and grown ups will ask me how long a book takes to write, and I always answer that each book is very different. ‘Dream of Night’ only took about a year, but ‘The Whole Sky’ — which had many different titles, by the way — took several years.”

Henson says while writing it, she had a lot of starts and stops. Her sister, Holly Henson, died of breast cancer she’d been battling for several years, but in the end it was very fast and took the whole family by surprise.

“She died two weeks before the season began at Pioneer Playhouse, so the rest of that summer — and really the next couple of years — was all about jumping in and helping keep this place that has meant so much to my family, and to the community, alive and kicking.”

Henson put her writing on the back burner, and it took some time to get back into the groove of writing, back into the world she’d started to create years before for “The Whole Sky.”

“But finally I did it, and finished, and it was just an incredibly gratifying feeling to complete something that had ended up taking a lot longer than planned. My editor is very tough, and I typically go through many, many drafts with her — for all my books. Officially I’ve written three drafts of ‘The Whole Sky,’ but unofficially I’ve probably written 10. Hundreds and hundreds of pages that never made it into the final book …”

Henson says she knew she was finally close to a finished book when her editor started sending her cover ideas. “That’s the fun part! Writing isn’t always a whole lot of fun — it’s a lot of hard work. But finally seeing what your book might look like is Christmas times 1,000. Right away, I loved the cover ideas, and I just adore the final product. I think it’s perfect, and I think it will really appeal to readers — young and old.”

She says the book is about horses, but it’s also about a young girl coming to terms with the death of her mother, and having to be strong during some very tough times. She thinks young readers will relate to Sky’s pain and ultimately her resilience in the face of tragedy.

“I really wasn’t a horsey girl growing up. I was an artsy theater girl. But my family has a history with horses,” Henson says.

Her daughter, Lila Ungs, has become a rider after taking lessons for several years. “I live vicariously through her. Her riding teacher, Mary DeLima of DeLima Stables in Mercer County, was also a big help and influence as I worked through the final draft of the book.” 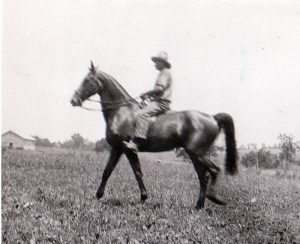 She says her grandfather on her mother’s side, Robert Hutchison, was a well-known horse trainer in Mercer County and all over Kentucky. The farm where he trained is actually where Henson, her husband and children live today.

After a tragedy her grandfather’s farm — a barn fire which took many of his beloved horses — Henson says he turned to tobacco and corn instead, but there were always photos and paintings around of his prize horses.

“I always heard stories of how he was a true horseman — it definitely influenced me as a writer.”

The Boyle County Public Library will host a book launch for Heather Henson’s “The Whole Sky” 4 p.m. Thursday. Henson will do a reading, participate in a Q&A, sign copies and also raffle off a book and poster. Refreshments will be onhand, and the event is for all ages.