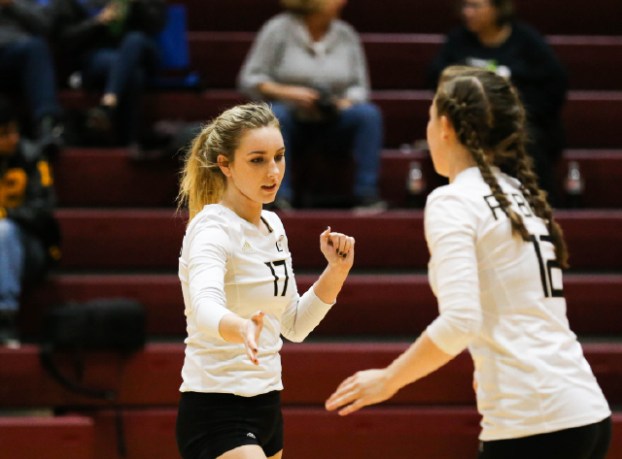 SOMERSET — The Boyle County Rebels largely matched the favored West Jessamine Colts in intensity in the 12th Region volleyball semifinals Wednesday at Pulaski County, but the Colts utilized superior height on the front line and pin-point serving to post a 25-16, 25-12, 25-21 victory.

West Jessamine moves on at 28-10 to shoot for its’ second straight regional championship tonight at 7 p.m. against Southwestern.

“West Jessamine is a really good team,” Craig said. “I think they are absolutely fantastic all the way around. They have things you can’t coach, like height, and they have fantastic ability. We’re short, in the 5-9 range — our tallest girl is 6-foot — and we’re not used to playing against that.

“I definitely knew they were a team that could run a good offense and a good defense,” she added of the Colts. “I knew it was going to take everything we had to give them a run and more.”

The Colts generally held the upper hand throughout, though the Rebels made a six point run in the middle stages of the third set that gave Boyle a brief 16-14 lead and hope.

“We had a great server on the line in (junior) Sierra Dean, and then we had (junior) Mya (Van Steenlandt) on the outside, and that rotation got a lot of good plays in that third set,” Craig said.

Coach Bill Bird’s Colts gathered themselves and closed it out. West Jessamine’s big girls in the front, particularly 6-foot-3 sophomore Josie Disponette, were lethal throughout.

“Our big girls had their moments tonight,” Bird said. “Josie showed some dominance at times.”

Craig said the match was lost in the second set when the Colts had their game running on all cylinders, starting with the well placed serves.

The set was knotted at 11-11 at the midway point, but then West outscored the Rebels 14-1 the rest of the set behind the serving of junior Karis Sandefur and senior Alexis Rich. Sandefur served on six straight winners to give West a 17-11 edge, and then Rich was served on the final eight points of the set.

“I think West Jessamine is really good at spot serving, and I think they took a few of our girls out and got into their heads, and that was detrimental to us,” Craig said of the second set. “Our biggest problem in the second set was our receiving errors.”

“We definitely did not play up to our potential, especially in that set,” she added. “The third set, I think they had a little bit more grit about them and came out wanting it a little bit more, but it was too little, too late.”

“I tell you what: I was impressed with their will to win,” Bird said of the Rebels. “They had a lot of fire under them. They were diving after balls … they were getting to everything. I was really impressed with their effort. I told my team afterward, ‘If I’m up in the stands watching this game, I’d say Boyle wanted this more than we did.”

Craig said her team’s third-set rally rally did not make the final result much easier to take.

“It’s an emotional roller coaster knowing when you come into a match like this that it’s do or die,” Craig said. “And once you get down two sets, and you try to rally back and it doesn’t come your way, it kind of hits you all at once afterward.

“This team was a blast to coach,” she added. “This is my third year coaching them, and all of girls who play varsity have been with me all three years, except for one or two. So you build a bond with them, and they want to please each other and their school, and they fight to win.”

Boyd, a defensive standout, was not able to play Wednesday due to illness.

“All of my seniors stepped up this season and played well when they needed to,” said Craig, who labeled the season a success.

“Every season you have your struggles,” she said. “We had a slump there in the middle where we were playing really tough teams out of region, but I think that was a good thing. I think they were challenged and given opportunities to play high caliber teams like West Jessamine, so they could prepare for days like today.”

Craig won’t be the least bit surprised to see the Colts win the regional title tonight.

“You can tell they want to continue their run to get a second straight regional championship, and it will be well deserved on their part,” Craig said of the Colts.

“We can play much better,” Bird added, “and we’ll have to to win this thing. We need to step it up a few notches.”

Rebels take down Rockcastle in first region game; West next

Boyle County volleyball is on a hot streak. The Rebels upset Lincoln County in straight sets last week in the... read more