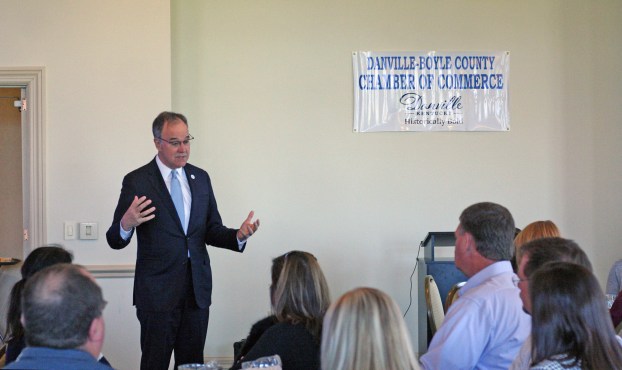 Kendra Peek/kendra.peek@amnews.com Dave Adkisson, president and CEO of the Kentucky Chamber, spoke to members of the Danville-Boyle County Chamber of Commerce on Wednesday.

About 30 business leaders in Danville and Boyle County gathered to hear Kentucky Chamber President and CEO Dave Adkisson speak about the state pension crisis, as well as the state chamber’s focus for the 2018 legislative session, on Wednesday during a Danville-Boyle County Chamber luncheon.

Adkisson, who is on a tour across the state aimed at familiarizing members of local chambers of commerce with the priorities of the Kentucky Chamber, first told attendees the current legislative body is historic because it was the first Republican-held body in 95 years.

“I refer to it as Kentucky experiencing two earthquakes in one night,” he said, referring to the 2016 election. “No. 1 was the presidential — Trump; and No. 2 was that Republicans took the House for the first time in 95 years.”

He said the Kentucky Chamber is non-partisan.

“We work with whoever you send us,” he said.

The Kentucky legislature has made some big moves in the last legislative session, he said, including passing a “right-to-work” law, which prevents unions from requiring dues; a law making charter schools possible; and creation of a review board for nursing homes, among other things.

About 500,000 of Kentucky’s 4.3 million residents are directly impacted by the pension-reform discussion, Adkisson said. He talked about the unfunded liability facing the state — how the money that has been promised to state workers and retirees isn’t there.

“(The state) has only set aside about $38 of every $100 promised,” Adkisson said. The money put in by teachers, school districts, county governments and others is there, he said. It’s the state that “held back” some of its portion.

Not funding the pension is only part of the problem — there are “several things working against the pension system,” he said.

He said the state ranks between 47th and 50th, depending on which ranking system used, in terms of pension liability.

A simplified comparison, he said, would put the three “on a one to 10 scale. One is doing nothing … Ten is the PFM report, the most dramatic. The Keeping the Promise was a six or seven; the educators plan is a two or three.”

“It moved a little bit — they were willing to give up some things, but it wasn’t what we considered to be enough to fix the problem,” he said of the proposal from educators. “I think the challenge for Frankfort is how to get to a five, at least a 4.5. We’ve got to fix the problem and we’ve got to do it without hurting the teachers.”

Looking forward to the 2018 legislative session, Adkisson listed priorities the Kentucky Chamber has, including:

• A responsible budget: Adkisson said he felt the “challenge of writing a budget this time is far more serious than any budget in the last couple of decades.” Unlike in the most recent recession, there is no federal money to “bail us out.”

“This pension problem, we own it. We’ve got to dig out,” he said.

• Tax reform: Adkisson said the Kentucky Chamber favors tax reform, as long as it “makes Kentucky more competitive in creating jobs. “We actually favor an increase in the cigarette tax, for example. Not so much for revenue, but for what it would do for young smokers,” Adkisson said. “We lead the nation in cancer among our young population.”

• Essential workforce skills: Adkisson said the state needs to be teaching children the skills they will need to be able to get a job while they are still in school. Those include soft skills, such as being on time for work.