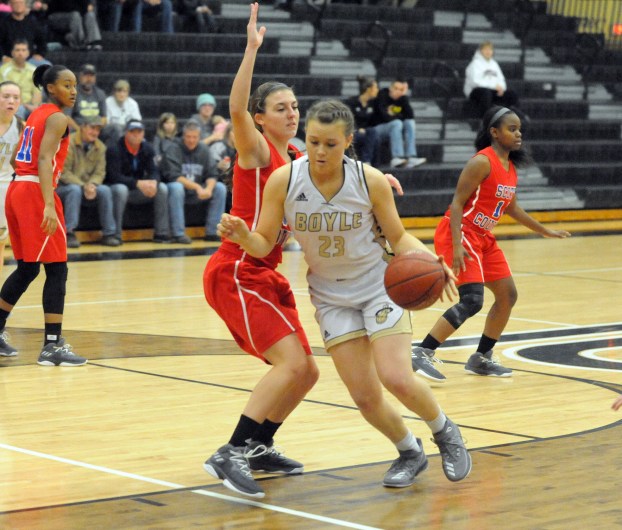 Replacing the school’s all-time leading scorer will be tough.

“We’ve got a lot of experience back, obviously the big thing with us is finding a point guard, finding someone that can get us into our offense and in our sets,” he said.

The Rebels return three of their top four leading scorers, and all three will be tasked with replacing Harris’ 26-points per game.

Edwards said the key for his team this year is balanced scoring: If three or more players get into double figures, he likes his chances.

“In our first two games, we’ve had good balance. We’ve had three in double figures,” Edwards said. “We’re trying to play more man-to-man defense this year, so early on we’ve been doing that and we’re working on that. There’s some areas we need to sure up, but I’m encouraged so far with what we’re doing and how we’re playing. The kids have been doing a good job, they’ve been listening and working hard.”

The Rebels lost their third game of the season to a talented Scott County team. Seniors Gracie Edmiston and Danielle Roney led the way with 18 and 12 points apiece.

Those two will be leading on the court and in the locker room this year.

Roney has been a mainstay on the stat sheet for years, and Edwards said she has a chance to break the all-time rebounding record at Boyle, a record that has stood for 40 years.

“Pound for pound, I wouldn’t trade her for anyone in the state at getting an offensive rebound. She has a knack for getting to the ball,” Edwards said.

The Rebels have strong numbers this year, but it’s building that depth that will be the focus for Edwards, particularly early in the season.

“Tonight we played Scott County, they’re extremely tough,” he said. “We play those teams for a reason, sometimes it just doesn’t work out on the scoreboard. But I think last year, they beat us 95-68, but we used that game to get better. You don’t get better beating teams you’re a whole lot better than early in the year.

“We’ve just got to try to work, get more depth. That’s something I wanted to do more this season, establish some depth. Everybody that has come back this year has gotten better, I think. We lost a couple people that didn’t come back, but we picked up Lauren Steinhauer, picked up Jadene Brock, we’ve got Brooke Coffman and Lindsey Wren back. We’ve got players who played for us in the past that we’re definitely going to count on.”

Friday’s loss was the first loss of the season for the Rebels (2-1). They’ll have an away tilt with North Bullitt before their first 12th Region game, against Somerset on Dec. 15.

“It’s a long basketball season,” Edwards said. “We’ve just got to try to improve every day. Practice on Monday, be better on Tuesday. Five people playing as one team. That’s our motto this year. We want to make sure everybody is on the same page. We don’t really have a big-time scorer, but we’ve got a lot of people who can score. If we can get three people in double figures, we’ll be in pretty good shape.”

Boyle County and Danville are each looking for ways to offset the cost of purchasing championship rings for their players.... read more