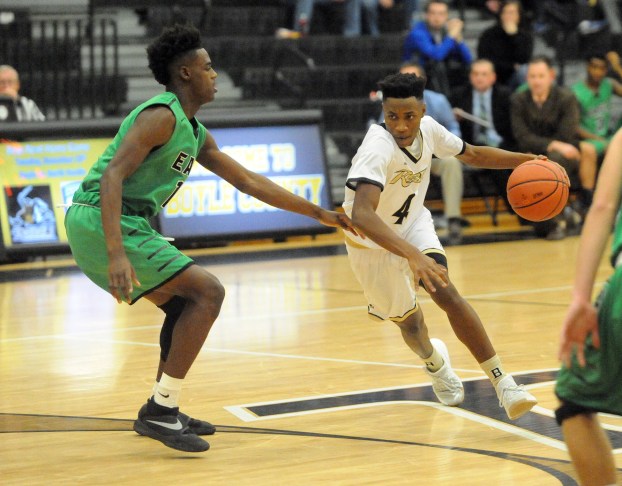 The same faces will lead Boyle County basketball in 2017-18, but you might not see the same playstyle.

Boyle has broken the 70-point mark twice in three games this season, and that’s without key players who are just starting to practice with the team due to football.

Bryce Slone, Jason “Baby J” Alexander and Will Bramel are the only three seniors who were on the roster when Boyle County last won the 12th Region championship in 2015. Slone and Alexander have started the past three seasons and they’re hoping to make their final year a special one.

“It’s awesome having the football guys back, they’re fresh off of a state championship,” Alexander said. “They’re competitive, they’re hungry too. It’s good without them because we got experience for some guys who didn’t have any. Now we have eight or nine guys that we can count on every night. If we want to make a deep postseason run, we’re going to have to have a deep bench.”

Head coach Steve Adams said that he’s been impressed by those players who might not have had as much time on the court if the football team didn’t win a state title.

“The other guys that haven’t played a lot of varsity basketball, these past two games have done a great job,” Adams said. “I’m talking about guys like Jacob Lassiter, Ben Hines, Matthew Bodner. Caleb Jackson played an integral part for us last year but he’s played really, really well. So we’re getting these guys back and we’re also getting other guys experience and confidence that should help us. We’re still without Will, too. But he’s been practicing. We’re nowhere near the team I think we’ll be, but the kids are playing really well.”

Lassiter is the starting center for the Rebels with Bramel out due to football. In Boyle’s win Friday against East Jessamine, Lassiter had seven points and five rebounds, despite playing just 11 minutes due to foul trouble.

Having that depth will be beneficial for a more up-tempo style this year, Slone said.

“This year what’s different is we’re more fast-paced,” he said. “Getting into things, we’ve got a new fast-break where we’re running into things immediately and we’re getting things in rhythm. And then, just putting up shots. We’re putting up more shots this year, we’re not going as slow and it’s showing in how much we’ve scored. That’s something new that we’ve added offensively … Practice is so physical, everybody’s competing for a spot this year because everybody has a chance to play. Coach is wanting to go deeper than he’s ever gone on the bench, which is nice because it’s making people more competitive.”

Both senior guards are at the forefront of the Boyle scoring this year: Alexander is averaging 19.7 points per game, Slone is averaging 23.3. Together, they have combined for more than half of the Rebels’ points this year.

“Right now, they’re playing as good of basketball as they’ve ever played,” Adams said. “They’re sharing the basketball, they’re seeing things. And they should, they’re three-year starters and went to the semifinals as freshmen. They’re really confident. The game at Somerset, one had 30 and the other had 26 and it wasn’t like they shot it every time. They’re playing unselfish and they’re playing hard. They just want it. It’s a good bunch and I think it’s going to be a fun bunch to watch.”

Alexander said that he’s learned from senior leaders from his time as an underclassman — guys like Josiah Robbins, Colton Elkins, Hagen Tyler and Jeremiah Bell. All four played key roles in the 2015 region champions.

“Colton and Josie, I really learned from them sophomore year,” Alexander said. “But freshman year, I really learned from Hagen and Jeremiah, just being at practice and in the locker room, them taking control. Sometimes they didn’t even have to say anything, it was just actions, watching how they led. That freshman year and that long season, I learned a lot from them. I knew that we’d have an opportunity to do something like that. Hopefully we can have the same success that they did.”

Alexander knew he should be a leader when he’s leading the offense as a point guard, but now it feels natural to lead.

“Being a senior, I just know now that this is my year, my last year,” he said. “I knew that in the past I should be a leader because I was the point guard, but now, I have to be a leader. Growing up it’s always something that I wanted to be, so it feels like my moment, our moment to lead this team to something special.”

Slone noted the underclassmen now could have a similar effect on the basketball team that they had on the football team. Sophomores Grant Hotchkiss and Reese Smith are each expected to regain their starting roles this season after missing the early part of the schedule with football.

“They’re bringing confidence, athleticism and a little bit of swagger, too,” Slone said. “They just bring something that we lacked, especially our first game, we just lacked that athleticism. And a little bit of smarts, too, Grant is really smart in the way he plays and so is Reese. That helps with football, too. I think that’s the main thing they bring, just a bit more ‘oomph’ to the team.”

Adams said that he’s seeing more drive from his players each day in practice now with the football players in the fold.

“Practices are much more competitive,” he said. “Now we’re to the point where we get after each other in practice. And you can tell we’re still a little rusty, but we moved the ball well and we had wide-open shots that just didn’t go down. But those will start to go down. Overall it has made practice much more competitive. It’s always good, this is my 10th year here, the years that we’ve been really good in football has brought an enthusiasm.”