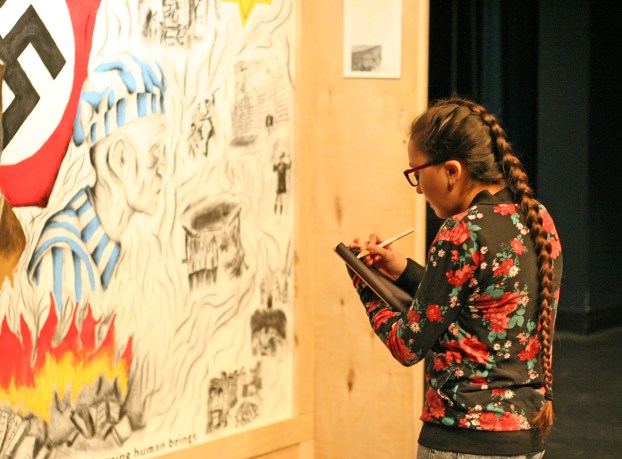 Kendra Peek/kendra.peek@amnews.com Sarah Voyles sketches her initial reactions to a mural at the "Never Again" exhibit.

Hope in the darkness: Eighth-grade students to share their artwork, written pieces about Holocaust 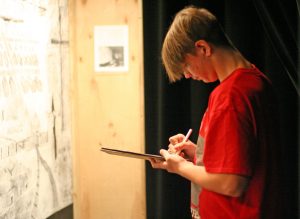 Studying the Holocaust can be a dark and heavy topic for students, albeit an important one to learn, but eighth grade students at John W. Bate Middle School said they’ve learned there’s hope, even in the darkness.

“When I first came into this, studying the Holocaust, I immediately went to bad thoughts and bad things happening,” said Sofie Sanders, a student artist. “But after we went through it, I was struck by how so many people continued to have hope.”

Sanders will be one of many eighth-grade students displaying their artwork or presenting their written pieces to the public on Monday night. The pieces included have all been inspired by what students have learned about the Holocaust.

“You can get through a lot of things in life if you just have hope and stay positive,” she said.

Other students echoed her thoughts.

“We go through problems on a much smaller scale and we feel like we can’t do it. Looking to the Holocaust, and what they went through, they continued on,” said Emma Nesmith. 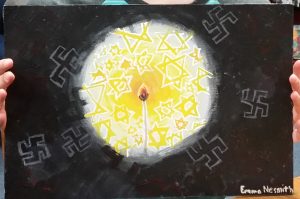 Kendra Peek/kendra.peek@amnews.com
Emma Nesmith’s piece, which uses a paintbrush as a candle, lighting hope in the darkness.

Nesmith used that idea of hope in her artwork, by depicting a paintbrush as a candle lighting the darkness, with the Star of David in light and the swastika in darkness.

“I really wanted to emphasize their creativity, how they used their talents to survive,” she said.

Braylon Emerson, another student artist, also highlighted the light in the darkness in his piece, which depicts someone dressed in striped clothes as if they were in the concentration camp, holding a lantern, bringing light to a nearly entirely dark canvas.

“It’s the sense of hope he has,” Emerson said. “When you have hope, you can get through any situation you’re facing.”

Other students used hope in their art pieces, too.

Maddy Griffin painted dark, stark bricks with a flower springing up to show hope in the harshness.

“The flower is pink and red and yellow, to show brightness and hope,” she said.

She was inspired by “The Diary of Anne Frank.”

Kirsten Blain painted a building, similar to the main buildings in concentration camps, with a fence running through the middle. On one side, the colors are dark and stark, as life for those in the camps, while on the other side colors are bright and varying.

“This side is how they were … (The other side) represents their dreams,” Blain said.

Haylee Griffin painted a bright orange butterfly flitting on green on one side, with dark bricks, to depict darkness, on the other. 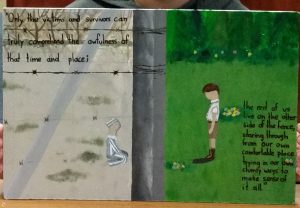 Kendra Peek/kendra.peek@amnews.com
Sofie Sanders with her piece, inspired by a scene from The Boy in The Striped Pajamas.

Sanders painted a scene from “The Boy in the Striped Pajamas,” a movie the students watched. She said she was really inspired by the movie.

On one side, a boy is seen in street clothes against green grass, on the other, a boy in a concentration camp. Across the painting is a quote from the movie.

The boy in the green yard, she said, is the light in the other’s life.

“He may not have understood how much of a part he had in keeping this little boy alive,” Sanders said.

Students said there were many more lessons to be learned. Nesmith talked about the diagram of hate, something they looked at in class, which shows hate starts with bullying and escalates to mass murder. 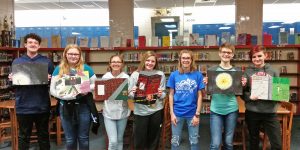 Kendra Peek/kendra.peek@amnews.com
Braylon Emerson, Kirsten Blain, Haylee Griffin, Maddy Griffin, Mackenzie Matthews, Emma Nesmith, and Sofie Sanders with their pieces. Matthews said her piece is still under work. These and other student art pieces will be on display 6 p.m. Dec. 18 at Bate Middle School. Other students will also be presenting monologues and self-authored poems.

“Bullying is the first step toward something that drastic,” she said.

Blain agreed and said, “It starts with name-calling. Saying someone shouldn’t look this certain way or should look this way, instead of how they do look or act. That shouldn’t still be a problem today, after this.”

She said it’s important to speak up when you see something happening.

Sanders said mass murders and other events like the Holocaust were still happening throughout the world, which is something everyone needs to be more aware of.

Blain said, “This is a huge problem that has happened and could happen again.” 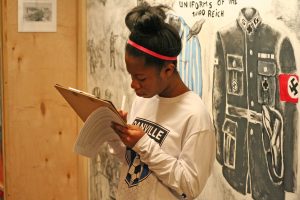 Kendra Peek/kendra.peek@amnews.com
Naomi Israel sketches her reactions as she looks at murals in the “Never Again” exhibit.

Mackenzie Matthews, who said her piece was still in progress, wished more people took the Holocaust, and the impact such hate could have on people, seriously.

In November, students had the opportunity to visit the “Never Again” exhibit, featuring artwork from students from Western Kentucky University’s Verbally and Mathematically Precocious Youth summer program. There, they also had the opportunity to meet Jeffrey Jamner, senior director of Education and Community Arts at the Kentucky Center for the Performing Arts. 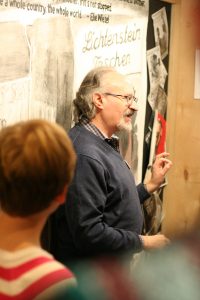 Kendra Peek/kendra.peek@amnews.com
Jeffrey Jamner, senior director of education and community arts at the Kentucky Center for the Performing Arts and a second generation Holocaust survivor, talks to students from Bate Middle School as they visited the traveling exhibit “Never Again,” at Danville High School in November.

Jamner is a second generation Holocaust survivor. He shared stories from his parents and grandparents with the students as they walked through the exhibit, before taking them to watch a video featuring Holocaust survivors.

Jamner said he had never intended to share those family stories.

“Seeing these (murals), they just started coming out,” he said.

He told students how his father and uncle were rushed out of the country by their mother, his grandmother, after the Kristallnacht, the Night of Broken Glass, in Germany. At the time, Jamner said, his father was a teenager.

Eventually, his father, uncle and grandmother were reunited. Jamner’s mother was a survivor of a concentration camp, as was his grandmother.

He asked the students, after they walked through the murals, what kind of world they wanted to create. Matthews said the visit with Jamner was really interesting, but said the murals were definitely hard to look at.

“You could almost put yourself in the place of a person who was there,” she said.

Nesmith said thinking back on that visit with Jamner, that was another sign of hope.

“He’s living proof that it’s possible to make it through,” she said.

Sanders said, “And that you could lead a normal life after.” 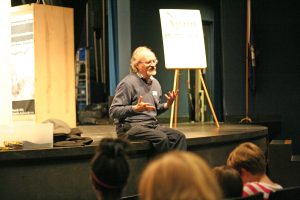 Kendra Peek/kendra.peek@amnews.com
Jeffrey Jamner, senior director of education and community arts at the Kentucky Center for the Performing Arts and a second generation Holocaust survivor, talks to students from Bate Middle School as they visited the traveling exhibit “Never Again,” at Danville High School in November.

The event will include artwork and written pieces created by students and inspired by the art and writings they have studied from the Holocaust. The school has participated in the Anne Frank Bearing Witness Project from the Kentucky Center for the Performing Arts, in partnership with Western Kentucky University, KET, the Jewish Community Center and the Jewish Heritage Fund for Excellence.

One day last week, Laura Randall, assistant manager at Family Dollar on Lexington Road had a typical day in the... read more