Kendra Peek/kendra.peek@amnews.com The students in the Boyle County High School Entrepreneur Class pitched their ideas to local business leaders on Thursday. One team was awarded $1,500 to fund their business and will recieve a $1,000 total in scholarship money to share. 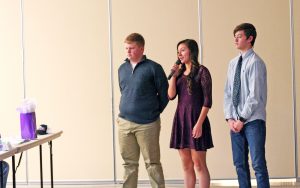 Kendra Peek/kendra.peek@amnews.com
Wyatt Acey, Linsey Warrinner and Alex Dickinson are the trio behind Sockers LLC, a sock specially designed for soccer players. The business was awarded $1,500 from the panel and the students will get $1,000 in a college scholarship to share.

David Christopher, who teaches the class at Boyle County High School, said it’s his favorite class, because it offers such an opportunity to work with the community.

“It’s community and education working the way it should be,” he said.

Prior to giving their pitches, students work with business mentors as they build their products and business plans. They also met with lawyers and accountants; worked on web design; and more as they progressed through the class. 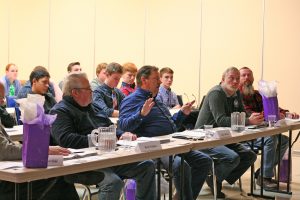 Kendra Peek/kendra.peek@amnews.com
Brad Simmons talks to students during their pitches on Thursday.

There were 11 teams, consisting of 28 students. They made their pitches, receiving feedback from the panel of potential investors, which included David Fairchild, Rick Waldon, Brad Simmons, Shane Baker and Pat Heist.

The men choose to invest some of their own money into the projects.

The winning project was Sockers LLC, with Wyatt Acey, Linsey Warrinner and Alex Dickinson. The project includes modifying socks to make them better for soccer players. The students were awarded $1,500 from the investment panel for their business and will be awarded $1,000 in scholarship money to split.

Initially, the students planned to make and sell their product, but they were advised instead to patent and sell it. They said they were going to take that advice under serious consideration. 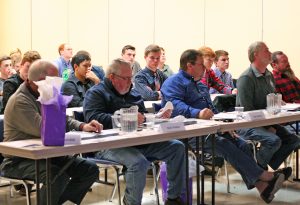 Warrinner plays club soccer and soccer with the Boyle County High School, which makes her familiar with what a player needs. That’s how they came up with their idea, which relates to shin guards.

The trio are close friends and said they initially weren’t sure they should work together, something they said they were advised against doing.

Acey said they decided early in the project to not let themselves get emotional or let their feelings get hurt if there were disagreements, which worked out pretty well.

Warrinner said they “had some bumps along the way.”

They said the class overall had been a very good experience.

“There’s a lot of classes where you learn math and things like that. This is something that’s real world, you can take it and grow with it,” said Warrinner.

The students are considering going into business in the future.

Acey said a lot of people thought the class was going to be easy, but “it definitely wasn’t.”

“It helps having a good team,” Dickinson said. 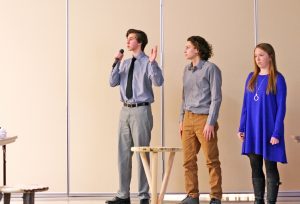 Kendra Peek/kendra.peek@amnews.com
Luke Morris, left, Kaiden Gibbs and Mandy Keeton are the brains behind Blitzwood LLC. The team was awarded $700 for their business, which involves making unique furniture.

Like the show “Shark Tank,” some ideas were funded, but some were not.

“You hate to see some not get funded,” said Christopher. “They work hard on these projects.” 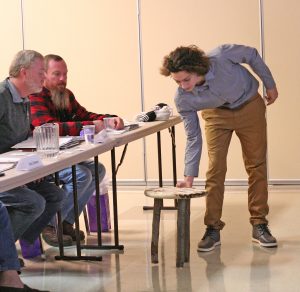 Kendra Peek/kendra.peek@amnews.com
Kaiden Gibbs sits down a table created by his team Blitzwood LLC, in front of Shane Baker and Patrick Heist. His team includes Luke Morris and Mandy Keeton.

But, Simmons told the students at the end, every endeavor in business is a chance to learn something. Before Fowler announced the final amounts being invested, she encouraged all of the students to take the advice the panel had given them and adapt their plans.

Economic Development Partnership members are being asked to throw a little weight around in an effort to help the push... read more