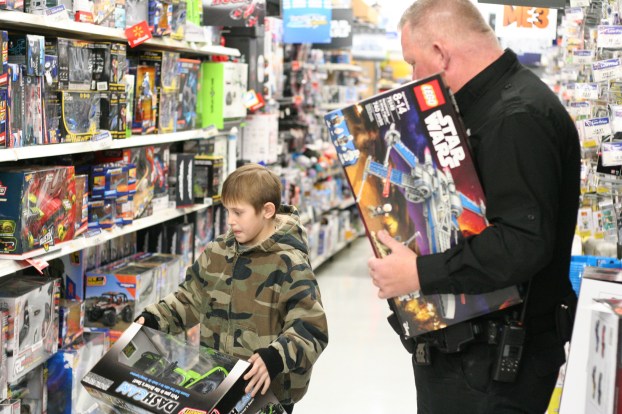 (Kendra Peek/kendra.peek@amnews.com) Alex Cook considers what he wants to get with the help of Junction City Police Chief Merl Baldwin during Friday's Shop with a Cop event.

More than $2,900 was raised for Boyle County Shop with a Cop this year, giving 18 students a chance to shop and eat with local law enforcement officers on Friday. 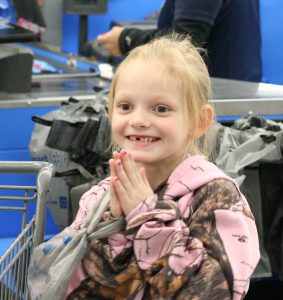 (Kendra Peek/kendra.peek@amnews.com)
Sophie Teague claps with excitement after checking out.

That money’s not including what some officers put in on their own, if they went a little over their allowance.

“Almost every officer or deputy spent money out of their own pocket to make sure their child got exactly what they wanted,” said Jennifer Gaddis, one of the organizers of the event.

Gaddis said a huge thanks was owed to everyone who made the event possible by donating money or time.

“I’ve worked in a lot of different counties across the state in my role as court-designated specialist and I have to say that these officers and deputies are some of the most wonderful guys I’ve ever worked with,” she said. “And that’s what makes this event even more successful.” 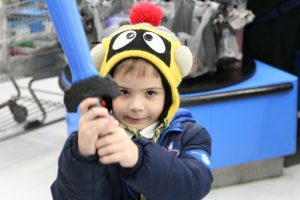 (Kendra Peek/kendra.peek@amnews.com)
Elijah Byrd holds up a toy sword he got at Friday’s Shop with a Cop.

Some of the kids shyly said they had fun shopping with the law enforcement officers as they waited to check out. After making their purchases, the group headed next door to Cheddar’s to eat lunch together.

“I watched as they ate and talked with these kids during lunch and there wasn’t one face there that didn’t have a smile on it, including mine,” Gaddis said. “This community is blessed beyond measure.” 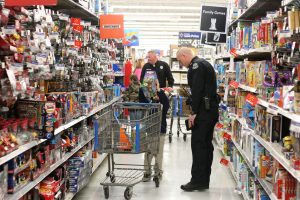 (Kendra Peek/kendra.peek@amnews.com)
A kid puts a toy in his cart while his shopping buddy, Officer Aaron Sparks with the Danville Police Department, watches. The two were part of a group participating in Shop with a Cop on Friday.

Fellow organizer Stacy Coontz said it was easy to see the kids enjoying the day.

“And I know we did,” Coontz said. “It was truly wonderful.”

While in Walmart, she said people came up to her and asked how they could contribute for next year. Gaddis said they plan to expand next year by buying gifts for 25 kids; many of the kids who participated this year asked if they could do it again next year.