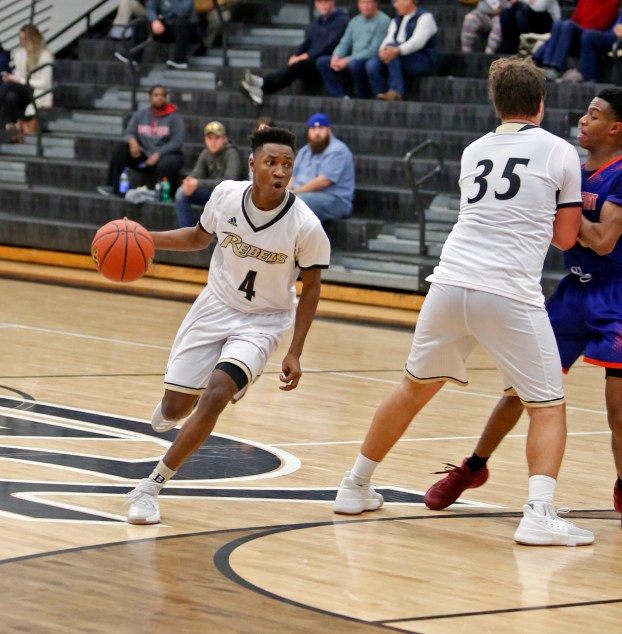 Steve Adams wants the Boyle County boys to play faster this season, but they don’t always have to be in such a hurry.

The Boyle coach wants the Rebels to execute their up-tempo offense with a purpose, as they did in the second half of their victory over Frankfort on Tuesday night.

Facing an opponent that didn’t mind a frenetic pace, Boyle survived a sloppy first half and made smarter decisions in the second to defeat Frankfort 77-72 at Rebel Arena.

The Rebels turned the ball over 13 times in the first half but only five times in the second, and Adams said their execution on offense was much better after halftime.

“What we want to do is push the ball up and take advantage of putting the defense in scramble mode. … Sometimes when you push it up there and they do a good job, you’ve just got to go right into to execution of the offense instead of trying to make stuff happen,” Adams said. “We did a pretty good job of executing offensively in the second half in the half court. We got good ball movement, good ball reversal, and that opened up driving lanes and good shots for Reese (Smith) and Bryce (Slone).

Slone scored 24 points, including 14 in the second half, and Smith had 20 to lead host Boyle (4-2), which trailed by as many as seven points in the first half before rallying to within 41-40 at halftime.

“It was a fast-paced game,” Boyle center Will Bramel said. “We were running up and down the whole time.”

Frankfort (3-3), which brought a four-game winning streak to Boyle, was running neck and neck with the Rebels until the final minute. The Panthers’ John Tillman tied the game at 72-all when he hit two free throws after drawing a foul on an offensive rebound with 1:18 remaining.

Reese Smith put the Rebels back on top by sinking a 10-foot jumper with 1:08 to play, and the Panthers didn’t score again, missing three shots from 3-point range and one from the lane in the final minute.

“It just came down to the end of the game and who executed at the end,” Frankfort coach Nick Barton said. “They got a couple calls we didn’t get and went to the free throw line and made some free throws.”

“Our defense wasn’t great tonight, but offensively I thought we played well,” Barton said. “I thought we executed pretty well in the half court and pushed the ball when we had opportunities to.”

DaJuan Davis scored 19 poinnts, Juanya Frank added 17 and Cody Carter had 16 for Frankfort, and John Tillman had 15 points and 15 rebounds. Tillman had seven offensive boards, and the Panthers had 15 in all.

Jason Alexander scored 12 points in the second half and finished with 19 for Boyle, which defeated an 11th Region opponent for the first time in three tries this season after losses at Bryan Station and Lexington Christian. Bramel had seven rebounds, and Grant Hotchkiss had five assists.

In the aftermath of a championship football season that kept some players out of the gym until after basketball season started, this was only the second game in which Boyle’s entire team has been together on the floor.

“We’ve not been together out on the floor long enough to slow down and understand,” Adams said. “We’re just not where we’re going to be.”

Frankfort led 41-34 late in the first half, but Boyle scored 10 straight points to take a 44-41 lead 30 seconds into the third quarter.

“In the first half they had 22 points off our turnovers. You cut that in half and we’re up 12 (at halftime),” Adams said.

This was everything good and bad about December basketball encapsulated in 32 minutes. The Boyle County boys reached both ends of... read more