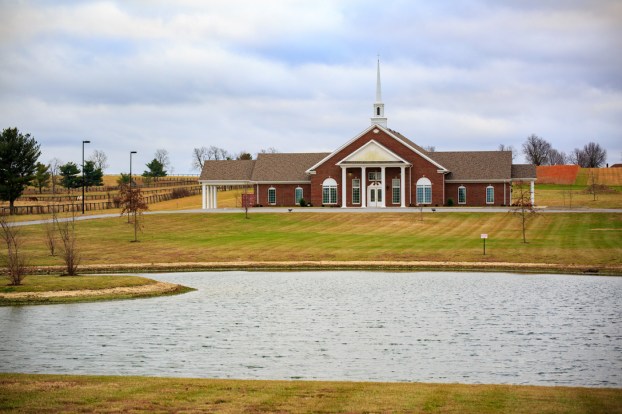 Ben Kleppinger/ben.kleppinger@amnews.com New Birth Temple of Deliverance on Perryville Road has plans to build a drug and rehabilitation center on its property, but an application for a conditional use permit has been withdrawn while some changes are made. An attorney for the church said the matter may be back on the Board of Adjustment's agenda in January.

Rehab center application withdrawn; attorney says it will be refiled

A church hoping to build a drug and alcohol rehabilitation center withdrew its application for a conditional use permit less than 24 hours before it would have been considered by Danville-Boyle County Planning and Zoning Board of Adjustments.

P&Z Director Steve Hunter said the “last-minute” withdrawal by New Birth Temple of Deliverance happened late Wednesday afternoon. Hunter said P&Z was contacted by an attorney for a group opposed to the project, Kevin Nesbitt, who raised an issue with the way the application had been filed. Hunter said he then consulted with P&Z attorney Bruce Smith, who advised that P&Z could suggest the applicant, New Birth, withdraw “due to the issue that’s been raised,” and New Birth ultimately decided to withdraw.

“There was something that didn’t gel from the opposition side,” Hunter said of the application.

Neither Nesbitt or the attorney representing New Birth, Bill Erwin, would say what the issue with the application was.

“I really don’t want to try that in the newspaper,” Nesbitt said.

“It was just something minor,” Erwin said.

New Birth plans to refile a corrected application with the Board of Adjustments by the Dec. 28 deadline to get on the board’s January agenda, Erwin said.

“That’s our plan,” he said. “We had a couple little things to fix before we could do it.”

According to a P&Z staff report filed before the application was withdrawn, New Birth “desires to build The Lighthouse, a non-profit, faith-based rehabilitation home for the treatment of drug and alcohol addiction. The home will be a 16+ bed facility constructed on the 14+ acres of the New Birth tract of land.”

New Birth is located on Perryville Road, just west of Danville. It’s noticeable from the highway in part due to the lake in front of the church.

The P&Z staff report lists six “items of concern” that could be addressed before a conditional use permit is granted. First on the list is the fact that when New Birth submitted a site plan for its location in 2011, there were conditions placed on the construction that have yet to be met — creation of a “drainage facility,” “revised sight lighting,” paving of parking and roads and striping of park spaces.

“The facility has been sent a notice of violation (NOV) and the staff has requested the property owner submit the (items in question) and a detailed timeline for their completion,” the staff report reads.

The staff report recommends New Birth meet the conditions of its original site plan “prior to any construction of the additional facility to be located on the same property.”

Nesbitt said he represents a group of neighbors of New Birth who are opposed to the plan.

“That’s not a customary and incidental use to a church. It’s a much more high-intensity use,” Nesbitt said. “… The application is so vague, but we do know it’s at least 16 beds — but they put ’16+.’ That requires significant staff and vendor trucks, visitors. That’s just not a compatible use with a quiet, small, hobby-farm area of the county.”

Nesbitt said he also believes it’s concerning that New Birth hasn’t complied with the original conditions placed on it in 2011.

“They have a drainage issue they haven’t dealt with; they put lights up that weren’t on the plan; they haven’t paved the lot (or striped the parking spaces)” he said. “… I have a question and a concern on whether they should even be allowed to request this until they bring what they originally agreed to into compliance. That’s kind of a good-faith issue there. If they’re not complying with the original plan, why would you even consider letting them go any further?”

Erwin said he couldn’t comment much on the case without consulting his client first. Asked to respond to the problems listed by Nesbitt, he replied, “I’ll save my comments for the hearing.”

The next Board of Adjustments meeting is scheduled for Jan. 18, 2018. The BOA did convene for its December meeting Thursday morning, but with the only major item on its agenda withdrawn, it only approved minutes from the last meeting and adjourned in less than one minute.

Donnie Martin, with Keys Nursery and Landscaping Co. out of Perryville, looks to the sky as a few rain drops... read more