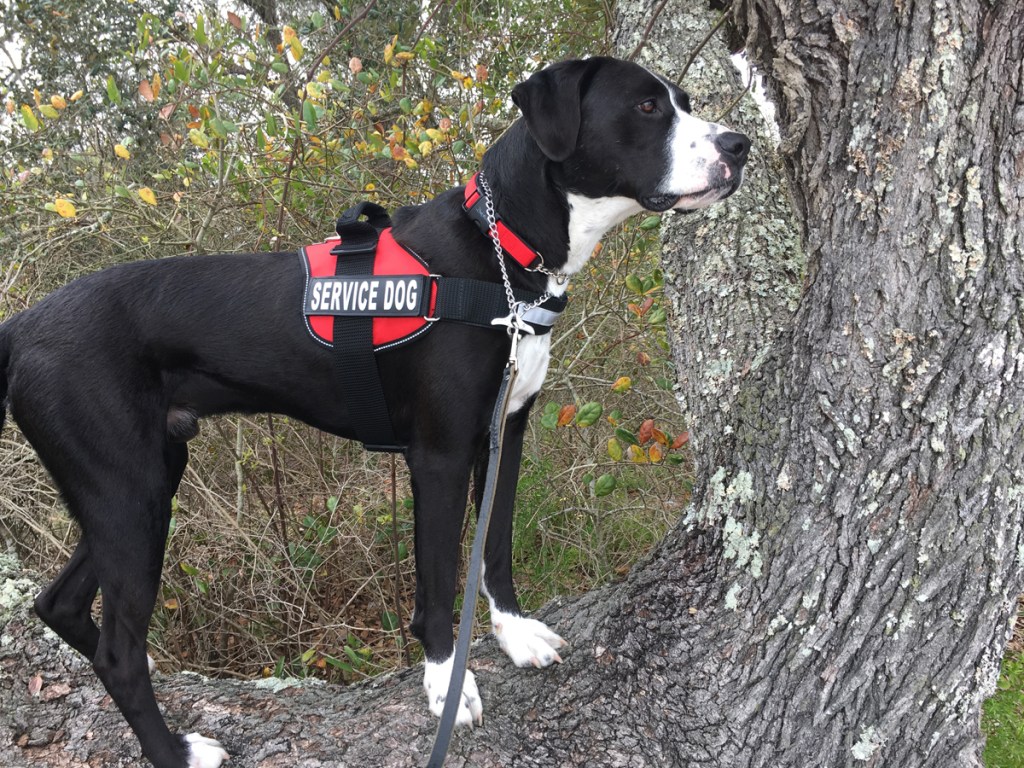 (Photo contributed) Zander is a dog from the Boyle County Humane Society shelter and a graduate of Mutts with Manners. After being adopted out and returned to the shelter several times, professional dog trainer, Cheri Carbone, of Danville, realized his intelligence and trained him to become her personal service dog, with the encouragement from Ken Knabenshue, founder of Working Dogs for Vets.

Rebel, a 9-month-old puppy that started his young life behind bars at the Boyle County Animal Shelter and in Northpoint Training Center, is on his way to helping free a veteran from everyday struggles he or she may be experiencing.
But he’s not the first local dog to become a hero with the Working Dogs for Vets program; more than one pup from the local Mutts With Manners has been selected for the specialized training.
Local professional dog trainer Cheri Carbone has been working with the Mutts with Manners program at Northpoint Training Center for several years. Carbone selects older puppies from the Boyle County Humane Society shelter, as well as dogs that may be harder to adopt out because of their age.
In the Mutts program, which usually consists of a class of five dogs at a time, prisoners are taught how to train them with basic obedience commands, making the dog more desirable as family pets. 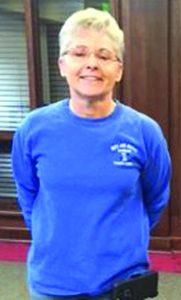 (Photo contributed)
Cheri Carbone heads up Mutts with Manners, a group which takes shelter dogs to Northpoint Training Facility and works with prisoners to train them.

Later in the 6- to 8-week training period, some teach their dogs “cute tricks, really nothing more than a service dog task,” Carbone said.
A service dog can be useful for some military veterans, especially those suffering fromPost-Traumatic Stress Disorder (PTSD) those who need medication alerts or have severe physical disabilities.
For example, as a “cute trick,” a dog can be trained to open a cabinet door. Or they can learn to pick up a basket and carry it in their mouth, Carbone said. In reality, such tricks can be useful for a veteran’s service dog to know.
When working with the program, Carbone said she occasionally “gets that special personality and you hate to send it (to a regular home.)”
That’s what happened with Rebel, who was recently chosen for the Working Dogs for Vets program and taken to Tennessee about two weeks ago.
“… he was a perfect candidate (to be a veteran’s service dog) because even though he was only a 7-month-old puppy, he walked into the prison like he owned the place. He wasn’t afraid of the tunnels, noises, the guards or even all the guys teaming up around him. He was a solid little guy. His brain was wanting to do something.”
Normally, the Mutts dogs are trained by a prisoner and make great family dogs. “But if there is a dog that has the talent to be a service dog, then I want it going to a service-dog home, not a regular home,” she said.
Sometimes the dog is too much for the family to handle, and they’re sent back to the shelter. Usually, these are the dogs that make great service dogs.
“The smarter the dog, the harder it is for the average person to live with it, but the smarter the dog is, the easier it is to be a service dog.”
Most any dog can learn the basic tasks, Carbone said. The hard part is pinpointing a potential service dog that has the stability to be around other dogs, or walk through stores and not be afraid of anything out in the public.
The Working Dogs for Vets Program trains its talented mutts for up to two years for veterans with PTSD and other disabilities. The dogs are given to the vet at no cost.
Ken Knabenshue, founder of the program in Lawrenceburg, Tennessee — just outside of Nashville — said the program has expanded across the U.S. Right now, he and other professional volunteers for the program are training more than 700 dogs for veterans, and this number grows every year, he said.
But even now, it isn’t even close to being enough trained service dogs for veterans who need them, Knabenshue said.
He estimates that all programs for trained service dogs are running three to four years behind, and a lot of other dog training programs only help veterans who have served in combat. 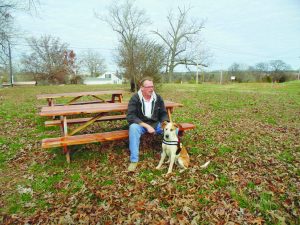 (Photo contributed)
Ken Knabenshue takes a break while training Rebel with the Working Dogs for Vets program, which he founded. Rebel is a shelter dog from Danville being trained to service a veteran.

“It eliminates a lot of veterans so you’re actually looking at about one and a half million veterans that are waiting for a service dog across this country.”
Most of the veterans don’t have the resources to purchase an extremely well-trained, full-bred dog — which can run between $25,000 to $40,000 — Knabenshue said. “You’ll get a very well-trained dog, but who who has that kind of money laying around?” he said.
Working Dogs for Veterans depends on professional dog trainers across the nation to train dogs, then pair the right dog with the right veteran, then teach the vet to complete his or her own dog’s training. This not only helps the veteran bond with the dog, but also teaches the vet training skills that they can pay forward, Knabenshue said.
“The only thing that keeps this moving is that any veteran that we help train the dog — they have to use what they’ve learned, or even if it’s just giving somebody else a ride back and forth to help them get their dog trained … Pay it forward. Everybody we help is expected to help another veteran somehow.”
“We help the professional trainers learn everything about training the service dog and the regulations. There’s a great benefit to get involved, and it’s the right thing to do,” he said.
In the past, Knabenshue came to Danville and took four other dogs from the Mutts with Manners program Carbone told him had great potential to become worthy service dogs. These special dogs were then given to veterans for free and were taught more service dogs tasks.
Dogs trained at Knabenshue’s home are for people who are more physically handicapped to the point they are not able to help with the training, he said. There are eight dogs, including Rebel, now being trained by him for vets with loss of multiple limbs or severe balance issues due to brain injury.
“If we try to train all the dogs in house, we’d be running about 25 years behind. Rebel’s the one sitting next to me right now,”Knabenshue said. “He’s going to be here a while. He’s pretty good but he’s got a long way to go … He already knows a lot of things and in two or three months he’ll probably know all the basics for PTSD. But if he’s smart enough, we’re going to move him forward for somebody who has more of a handicap or war disability.”
Knabenshue said Carbone noticed Rebel’s potential.
“She’s got pretty good judgment. She’s been around dogs for a while. I ain’t givin’ up anybody’s age, but she’s been around them about as much as I have,” he said and chuckled. 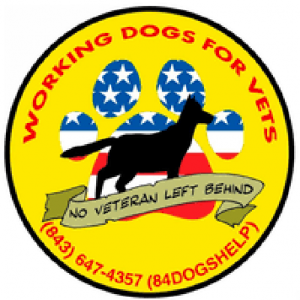