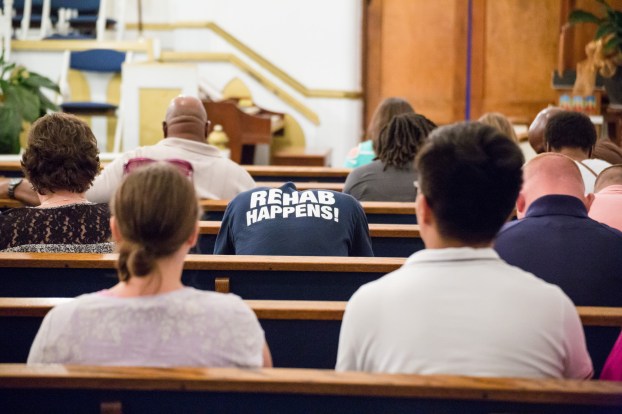 Denzil Hall, center with head bowed, participates in a prayer a prayer vigil for overdose awareness held in Danville on Aug. 31. (Ben Kleppinger/ben.kleppinger@amnews.com)

2017 in review: Boyle County battles back against drug addiction

Editor’s note: This is one of six big stories of 2017, as chosen by The Advocate-Messenger.

Drug addiction took its toll on Boyle County in 2017, as it did around the state and around the nation.

An opioid epidemic continues to rage in the U.S., devastating people from all walks of life, including many whose addiction developed through use of painkillers prescribed to them by doctors.

But at least in Boyle County, it’s not a hopeless situation. Many people worked hard on many different solutions in 2017, attempting to help people overcome addiction and reduce the health problems created by it.

On Jan. 13, Boyle County Health Department launched a syringe exchange program, aimed at preventing the spread of disease through the reuse of “dirty” needles by injection drug users, as well as helping drug users find help if they want it.

“The purpose of this is to try to get the needles off the street,” Health Department Director Brent Blevins said at the time. “And while we’re here, to also have the ability to talk to them — if they want to — about treatment, about further help they could seek and to see if they are interested in testing for HIV or hepatitis C.”

By mid-December, the syringe exchange program had surpassed the 4,000 mark for syringes given out and had taken in close to 2,400 dirty needles.

When someone visits to exchange their syringes, they also talk to a nurse for a few minutes. It helps the Health Department know about the people it’s treating, while still keeping it confidential. It also helps them share information about treatment options for those interested in getting help.

Blevins said they also talk about Hepatitis C, and getting patients to talk about it is a big deal. Some know they have it and will admit that. Others think they might have it, but don’t know.

“It’s amazing the number that are scared to be tested,” Blevins said.

He said people begin talking more to the staff at the Health Department as they make the return visits and begin opening up about themselves.

“They start telling us those stories and become more comfortable — we hope that leads to more being tested and treated,” Blevins said.

Some of the patients who bring in syringes are getting treatment in Lexington for Hep C.

The program is run by the Shepherd’s House, a recovery organization based in Lexington. It provides services for former inmates out of the former Red Cross building on South Third Street in Danville.

On Aug. 28, Shepherd’s House held its first “graduation” for clients who had successfully completed a six-month program.

“They’re walking out of here today, hopefully, as free men and free women,” said Patsy Harmon, office manager of the facility. “It’s a new adventure. They’re going to have control of their life again … Sometimes people give up on people. We’re not giving up. They’re special to us.”

Roger Fox, program director at the Shepherd’s House outpatient facility in Danville, said he was proud of the six graduates.

“I’ve been around a lot of graduations, being around the Shepherd’s House and in and out of a dozen treatment centers in my life. I’ve never been more proud than of this group,” Fox said. “I’m excited — I couldn’t sleep last night.”

The Shepherd’s House program has been working between 30 and 40 clients in recent months; the program currently maxes out at 60 clients.

In early December, Boyle County Jailer Barry Harmon credited the program with helping lower the jail’s population, which had peaked at more than 400 several times during 2017. The jail population fell below 300 for the first time since 2016 in early December, and by mid-December it had fallen to its lowest point — 259 — since 2012.

The jail has also begun offering “truth tours” for local students and their parents. Children and their parents attend truth tours at the jail together. The children first visit with members of Boyle County EMS and the Boyle County Sheriff’s Office, who teach them about the medical legal realities of drugs. Meanwhile, parents are taught about the signs of drug use and what to watch out for with their kids.

Then, the kids and parents will hear together from participants in the jail’s internal substance abuse program about the impact drugs had on their lives.

And there are numerous people outside the government sphere working to help those facing addiction, as well. They include volunteers with the Hope Network, which works in many different ways.

“Hope Network volunteers are leaving their political and denominational differences at the doors of the jail, treatment programs, and schools, to live out love, support, and caring for members of our community,” wrote Kathy Miles, coordinator for the Boyle County Agency for Substance Abuse Police in an October opinion column for The Advocate-Messenger. “They are recognizing the power of relationships for building resiliency in the young and healing the damage of addiction in young and old.”

Hope Network provides the Circle of Hope program through the Shepherd’s House program, which links clients up with mentors, who meet with their menses weekly for six months, helping them adjust to being in the workplace.

ASAP itself also works on solutions to drug addiction, including providing funds to transport people to rehabilitation facilities. Other groups fighting on the addiction front include Families Into Getting Help Together (FIGHT) and the Isaiah House.

Editor’s note: This is one of six big stories of 2017, as chosen by The Advocate-Messenger. The “Birthplace of Kentucky”... read more