December 2017 Looking Back at KSD 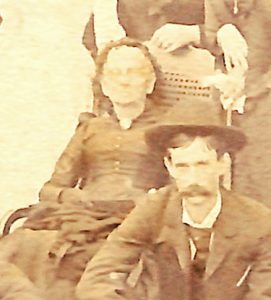 Eveline Sherrill
The Kentucky Institution (now KSD) held its first alumni reunion in June 1891. The Kentucky Deaf-Mute editor reported that Miss Eveline Sherrill was present and “though 80 years of age, was still vigorous in mind and body. She talks intelligently and interestingly of the early days of the Institution, her memory of which is excellent, and proved herself a pleasant cheerful lady who won all our hearts.” At 12 years of age, Eveline Sherrill enrolled in the Kentucky Asylum for the Tuition of the Deaf and Dumb on April 10, 1823.  She completed the permitted three years of instruction, leaving in 1826, returning for a fourth year in 1837.  Miss Sherrill never married and lived with relatives in Green and Adair counties until her death on April 17, 1900, at age 89.

December 1892 from The Kentucky Deaf-Mute

The girls are almost equal in numbers to the boys now. Usually the boys largely outnumber the girls and last year the proportion was almost two to one, but at present we have 79 boys and 74 girls. At the social entertainments there is no longer an imposing array of masculine wall-flowers as in former years and the tables in the dining room look better, with a row of girls on one side, and of boys on the other.

The pupils of one of the primary classes all wrote letters to Santa Claus a few days ago. Here is a list of the wants of one of them, stated in original English:

Please send me a box, Christmas. I want some black cherries (raisins), some lead-butter (cheese), some marbles, some switch-bread (beaten biscuits), some nuts, five moneys (five cents), a balloon and a jumping jack.

We hope, hope Santa will heed the requests for the little man, who’s called “Little Lord Chesterfield,” is a good boy and his requests are comparatively modest.

The teacher at the colored school, Mr. Long, returned from Green county Wednesday, bringing four pupils for the colored department. There are two or three others that he failed to get on account of high water. Mr. Long also went to see Miss Eveline Sherrill, the first pupil of this school, who resides in Greensburg, but she had left only a few hours before for a visit to friends in another county. Her nephew, Mr. Turner, reports her in the best of health with mind bright and cheerful, overflowing with good humor and kindness. She is now over 81 years old.

December 1917 from The Kentucky Standard

Van Coomer measured the snow last Friday and found it eight inches deep. The children were delighted because they like to coast and throw snowballs at each other.

The other morning when the members of one of the mathematics classes entered their schoolroom they found every one of the large wall slates dripping moisture. They inquired the reason for it and were told that the slates were weeping over the errors of the departing year.

About seventy pupils (of our enrollment of 335) went home for Christmas and our classes are considerably broken up this week, in consequence, but all are expected to return the first of next week.

About a dozen pupils on their way home for Christmas received a severe shaking up last Friday when two trains on the Southern Railway came together near Louisville. Mr. Schoolfield (KSD teacher) was also on the train but was not injured. The mail clerk on the train was seriously hurt.

December 1942 from The Kentucky Standard

A new Hubbard Oven has arrived and is being installed in our bakery. The installation should be completed before Christmas and our baker Mr. Ewing’s buns, bread and ginger cakes will again grace our tables. The state was unable to procure the oven until this time because of the demands of the war. This is indeed a splendid improvement over the old one.

The girls’ athletic association under the very able direction of Mrs. Francis C. Higgins has purchased several ping-pong tables. Ping-Pong clubs among the girls are being organized. Ping-pong is a very interesting table tennis game. It requires fast thinking, fast movements of body and accurate flips of the racket to catch up with the feather-weight ball coming and going back and forth on the table. Here’s hoping the girls have a whale of a good time with their new ping-pong sets. 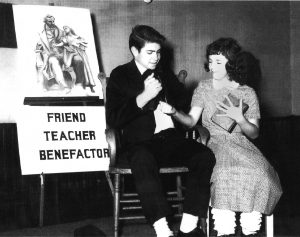 Gallaudet Day Program
The Reverend Thomas Hopkins Gallaudet, portrayed by Bruce Brunty, shows Alice Cogswell (Sandra Williams) the finger spelling of “a”. The skit was part of the Literary Society program of Saturday, December 10, in memory of the birthday of Thomas Hopkins Gallaudet, friend, teacher and benefactor of the Deaf. Dr. Gallaudet’s interest in helping the little Cogswell girl led to the founding of the American School for the Deaf in Hartford, Connecticut in 1817. A painting of Gallaudet and Alice, done by two pupils, Robert Smith and Timothy Sivils, of Miss Betty Taylor’s art class, is displayed on an easel on the left.

100 YEARS AGO — 1917 Several times lately the people o Danville have seen the need of maintaining a good... read more