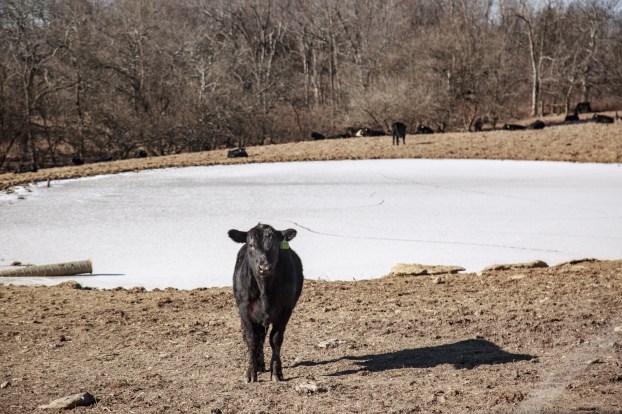 A calf stands in front of a frozen pond on John Helm's Boyle County farm.

Below-freezing temperatures for the past several days are beginning to take their toll on area residents and businesses. According to the National Weather Service’s observations taken at Stuart Powell Field Airport, temperatures bottomed out at negative 4 degrees Fahrenheit Tuesday morning. Temperatures haven’t risen above 27 degrees since Saturday, with most temperatures hovering between 9 and 18 degrees since that time.

The good news though, according to local officials, is that no one has suffered medical emergencies, nor have any pets been treated for injuries due to the bitter cold weather.

The bad news, on the other hand — water pipes and livestock ponds are freezing and furnaces are going out all over the county. 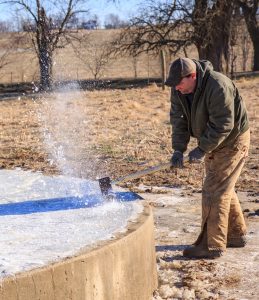 Ben Kleppinger
Boyle County farmer John Helm breaks the ice on a watering hole for his angus cattle. Helm’s farm has more than 1,200 cattle in 13 pastures, and each pasture has its own watering hole.

John Helm, a farmer on Perryville Road, is caring for his herd of 1,275 feeder calves day and night. Helm said the main problem is making sure the calves have plenty of fresh water to drink. Because the natural water supplies have frozen over, he wields a heavy axe to break holes on the edge of ponds and watering holes at least twice a day. Even the automatic watering systems are freezing, Helm said.

Another issue Helm is dealing with is feeding the cattle. The diesel trucks and tractors he uses for this chore, “don’t like to start up when it’s this cold…It’s all we’re doing right now,” he said, referring to minding to the cattle and water.

The surprising thing, Helm said, is that the calves are actually just fine. He said Tuesday morning when he went out to break the ice, about half of the herd were running around and playing.

“They’re equipped to handle this,” as long as the sun is shinning and the wind isn’t blustery, he said.

Many homes are being stricken with frozen water supplies too.

Haley Doneghy with the Danville Water Department said Tuesday morning they haven’t had any reports of water main breaks. But the office has been receiving a lot of calls from residents questioning why their water was off. “They never think that their pipes are frozen,” she said. So they call asking if the water department shut it off for some reason or if there was a water main break somewhere.

Doneghy said the first thing she asks when the temperatures are this cold for so long, is if the resident had the cabinet doors open and water dripping. If they don’t, then she tells them it’s time to call a plumber.

Many times they decide to take matters into their own hands and attempt to thaw the pipes themselves. That’s when pipes can burst because the person only thawed one small section of pipe and when water rushes in, the pipes can split.

James Massey with Massey Plumbing in Danville said he has been getting a lot of calls to thaw pipes in cold, dark crawl spaces, but he expects many more calls once the temperatures rise and the pipes thaw. That’s when residents and business owners can see melted ice spewing from split pipes.

He suggested everyone should know where their main water cut-off valve is and to watch and listen for running water once the pipes thaw. “Don’t panic,” he said.

This isn’t the worst cold snap he’s seen during his 32 years as a plumber. Since his grandfather started the plumbing business in 1942, and his dad continued in the business, Massey said he has seen a lot of burst pipes. One winter just a few years ago, he saw a temperature of about 20 degrees below zero, he said.

Heating systems are also being taxed during the cold spell.

Monte Cress of Custom Air Inc. in Danville said, “Dad (Jim Cress) and I ran emergency calls all weekend long.” Even at 9 p.m. on New Year’s Eve, Cress said his dad was working on a furnace under a house.

He said furnaces, and especially heat pumps, are having troubles this time of year. He said it’s a little bit of everything going wrong, including motors and control boards. And once heating systems go out, then frozen pipes aren’t far behind in below freezing temperatures.

Not all heating problems can be avoided, but Cress said maintenance at the beginning of the season is the best thing to do to try and prevent problems.

Zach Gammon, owner of Apex Plumbing, said, “We are slammed” with calls about frozen water pipes. “Everybody is freezing up.”

The company has 21 employees and they are holding off on non-emergency water projects while crews concentrate on helping residents.

“It’s awful,” Gamon said. “We’ve had crews out every day and night through the holidays.”

Gammon said they are working on a large building right now that even has ice in the toilets. He said big, open buildings are hard to heat in the extreme cold, making them more susceptible to damage.

Gammon said they are taking precautions and wearing extra layers, but as plumbers, they are also used to working in extreme  conditions.

Boyle County Sheriff Derek Robbins said as of Tuesday morning, the department hadn’t answered any calls directly related to the weather. But, he said, officers are patrolling the roads more, just in case a stranded motorist needs heat or a ride somewhere warm.

“It’s so cold, and too dangerous,” to be out for any length of time, Robbins said. So officers are also watching for dogs that may be chained up outside. He also said it was a good idea, “to take care of your neighbors.”

Danville Police Chief Tony Gray said his office hasn’t received any weather-related emergency calls either. “I think people have seen the weather forecast and are being very responsible.”

But if you do need to venture out on a trip, Gray said police are urging everyone to keep their vehicle’s gas tanks more than half full and their cell phones charged. When traveling, it’s also a good idea to have extra clothing available.

In the event of an accident, Gray said police have emergency blankets in their cruisers and officers make sure those involved are protected from the elements.

“We will allow them to wait for family in cruisers, or give rides to  short distance when it’s necessary,” he said.

“It’s not been above freezing since Christmas night. It’s kind of brutal,” he said.

Wilder monitored emergency radio traffic all weekend and said he was pleased that no weather-related emergencies arose. But there’s still time to have cold-related issues this week — forecasts predict below-freezing temperatures until Sunday, he said.

Survival kits are important to keep in your vehicle at all times, Wilder said. “And it doesn’t take five minutes to do it.” He suggested that blankets and water should be included in these kits.

When traveling, it is wise to let family or friends know where you’re going and when you expect to arrive, Wilder said.

Chief Gray said early in December, he and his wife saw a couple with a small child who was having a problem with their vehicle. He got out to help and called dispatch to have an officer come to the scene immediately, and two cruisers showed up and assisted.

Gray said, “Most of us have family and we do for our citizens what we would want someone to do for our family in the same circumstances.”

Editor’s note: This is one of six “big stories of the year” as chosen by The Advocate-Messenger. 2017 was a... read more