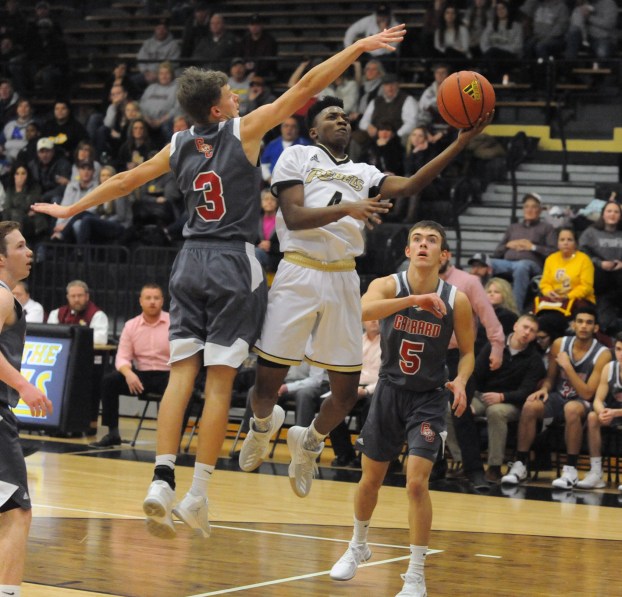 Boyle County had a size advantage against Garrard County and took advantage.

The Rebels looked like the more-experienced side from the beginning of Friday night’s game, forcing turnovers and winning rebounds on their way to a 70-54 45th District victory.

Garrard head coach Ryan Young said his team knew what to expect from the opening tip-off but couldn’t adjust to the Rebels’ physicality.

“What we talked about was just the lack of physicality that we showed,” Young said. “We know they’re a very physical team, we knew they were going to pressure us and take away passing angles, and they did. We didn’t match it very well. I just kind of challenged them about who we can be going forward and we’ve just got to keep getting better. You can either tuck tail and hide or you show back up and when the ball is tipped again, go back after it.”

Boyle opened the game with a 21-11 lead and led by 11 points at halftime, scoring 13 points off of 11 Garrard turnovers.

The Rebels, however, weren’t perfect: Boyle had five turnovers of their own in the first half and put one of the best free-throw shooting teams in the state on the line 10 times in the first 16 minutes.

“We played good in spurts, not so good in spurts,” Boyle head coach Steve Adams said. “We were our own worst enemy on some things, trying to rush, sometimes trying to do things too good. We’ve just got to be smarter with the ball, do some things there. We’re getting there. You can’t play perfect every night.”

Bryce Slone had 11 points at halftime and Will Bramel added nine points of his own. Garrard’s Justin Preston led halftime scorers with 12 points.

“The things we were stressing in practice, we did a much better job of tonight, being more aggressive on the offensive boards,” Adams said. “We’ve still got a long way to go, but any district win is a good one.”

Preston didn’t score in the second half, but sophomore Brayden Sebastian scored eight of his team-high 14 in the second frame. He also had seven rebounds.

“I just think he played shakey,” Young said of his leading scorer. “I think he was a little tight. I’ve got to remind myself that he’s still just a sophomore and that he’s going to have some mistakes. But once again, I thought there were plays underneath and they were the tougher team. That’s not just on him, that’s on everybody that we have.”

Boyle did well to take the Golden Lions’ size out of the game: Junior center Charles Jones played just five minutes in the first half due to foul trouble, despite contributing two blocks and four rebounds.

“We’re limited with our depth, that’s just where we’re at with the program numbers-wise,” Young said. “We’re working to try to develop some younger players. But calls happen. We worked in practice if he were to get in foul trouble and we had to switch to zone there and we didn’t locate shooters, didn’t cut off driving angles. But I was proud of how he fought. That was the first time he was in an experience like this so I think he’ll learn and grow from that.”

With Jones out of the game, the Rebels fed Bramel in the post. He finished with 14 points and was 8-for-12 from the foul line.

“We’ve been wanting to do that more because (Bramel) is 6-foot-6, 270 pounds in there,” Adams said. “If he can score in there then it opens things up for our cutters and our three-point shooters as well. Will is still rounding into shape, so is Grant (Hotchkiss), Reese (Smith), Landen (Bartleson) and the rest of the football guys. We’re still a month out of having everybody. I hope our best basketball is ahead of us. We’ve got to key in on these next three weeks on the mental aspect of the game and make sure that we’re making good decisions.”

Young said he hopes his team learned from a challenging road test midway through the season.

“It’s a tough place to play, it’s always been a tough place to play. Good fan base, they’re not called the rowdies for no reason,” he said. “I hope we grow from it, every district game is a different experience. I was just disappointed that we didn’t seem to come out, fight and compete more. I thought they played harder than us. If they play harder than us they’re going to beat us.”

Both teams have a tough slate next week: Boyle visits Danville before hosting Lincoln, while Garrard will host Estill County and Danville.

“Going at Danville is huge, it’s a big game, cross-town rival,” Adams said. “They’ve got a solid team and we’re going to have to play well. Then we’ve got Lincoln rolling in here on Friday, and we all know what type of rivalry that is. We’ve got to take care of business at home in district games. It’ll be a tough week, a good week. Then it doesn’t get any easier for us but that’s OK.”