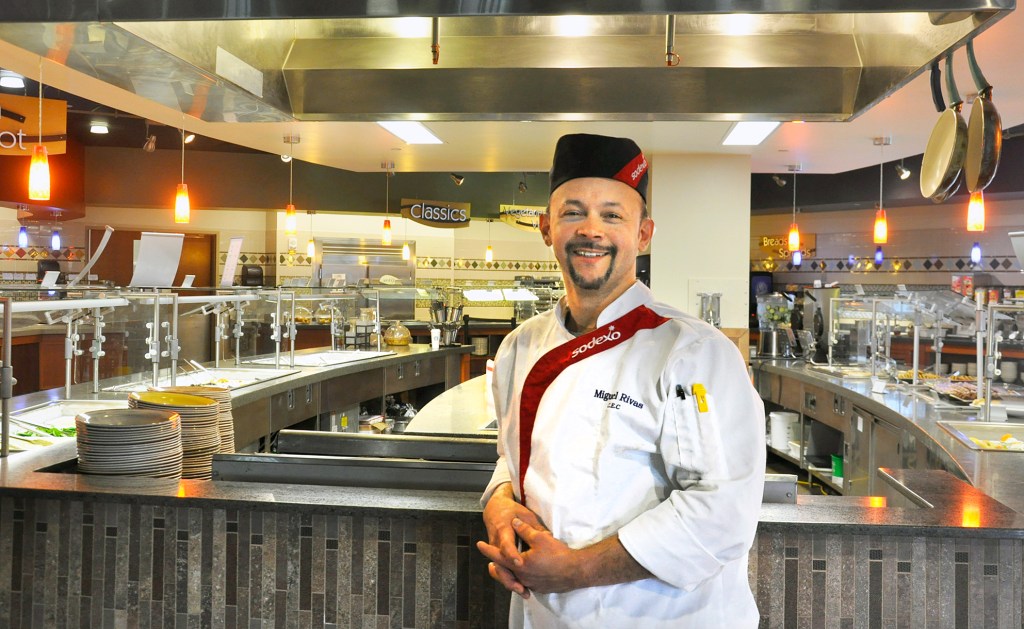 You don’t have to have a professionally equipped, state-of-the-art kitchen in your home to prepare wonderful, delicious meals, especially if you’re an American Culinary Federation Certified Executive Chef like Miguel Rivas. He’s head chef with Sodexo at Centre College.

Rivas is also involved with Azur and Brasabana restaurants and Dupree Catering — and he enjoys casually cooking for his family at home, too.

His home kitchen is nothing special, but “there’s nothing better than a home-cooked meal,” Rivas said. Even if he and his family are on the road, he’ll go hungry a little while just to get home and cook.

Rivas received the status of Certified Executive Chef back in October when he passed an extensive exam that proved his knowledge of culinary terms; administrative details; food costs and controls; profitability; and balance and calculations of proteins, calories and carbs in a menu, as well as for individual foods.

He also was challenged in a three-hour cooking test, when he prepared three different meals that showcased his skills in original recipes, menu planning and preparing, knife skills, sanitation practices and how to utilize ingredients.

Rivas said, “You have to get your timing right in order to get everything done for the tests’ requirements.”

For example, this includes making sure you know how long to cook the meat, how long vegetables take to be al dente, and that the starch in the meal isn’t too fluffy or too loose.

Rivas said even a very experienced chef would probably fail the CEC test because of all the minute details participants are judged on. Therefore, it’s important for chefs who want to be certified with the ACF to complete a 12-day course that reinforces the specific skills tested.

Rivas said he wanted to become a CEC and was encouraged to pursue this distinguished accomplishment by his employer, Sodexo, who he has been working for at Centre for about a year and a half. Sodexo was so confident in his skills, it sponsored his 12-day extra training period.

Some of the best chefs in the United States judge the participants — so becoming certified is quite an honor and a very good award, Rivas said.

Becoming certified “bolstered my skills and confidence and attention to detail” in the field of culinary arts, he said.

Rivas, the baby of 10 children from the Dominican Republic, moved to New York City when he was younger to be with his parents who were living there. He said around 1994, he started college, studying computer programing, but it didn’t interest him very much. While attending school, he began working for a kosher catering company.

Rivas said he liked the work and the chef liked him — that chef eventually became a mentor to Rivas.

Rivas was later awarded an internship in New York City with Jean Georges, “one of the best chefs in the world,” Rivas said.

He said he “was one of the lucky ones.” When the internship ended, Georges offered him a job in one of his restaurants in New York City.

After a while, Rivas traveled to Paris, France, to study culinary arts for a while.

One thing led to another, and Rivas eventually landed in Lexington, where he lives with his wife and 7-year-old child. He also has a 19-year-old going to college.

Being involved in the competitive Lexington restaurant scene, as well as making sure Centre students, faculty and staff are receiving the best culinary fare, “requires me to always be sharpening my skills,” Rivas said.

Cooking pork shoulder and pork butt is one of Riva’s favorite meats to prepare. But, “I get excited when I see fresh fish!”

According to the American Culinary Federation website, “The title of Certified Master Chef, presented solely by the American Culinary Federation (ACF) in the U.S., is the highest level of certification a chef can receive. It represents the pinnacle of professionalism and skill. Today, there are 68 CMCs and 10 Certified Master Pastry Chefs (CMPC) in the nation. “

And since becoming a CEC about two months ago Rivas said he is definitely going for the CMC title. 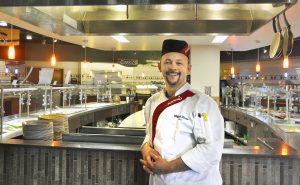