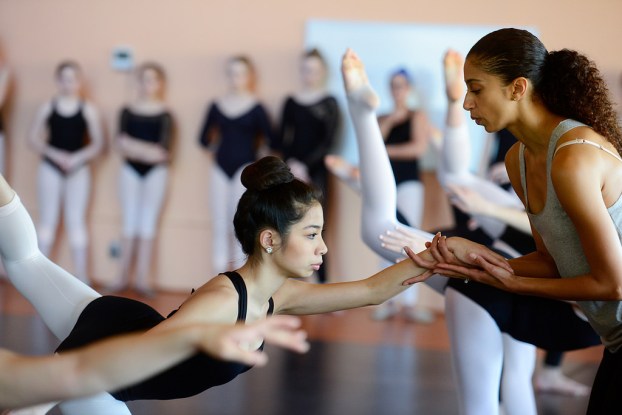 Dancer Alicia Graf Mack with the Alvin Ailey dance company, at right, works with a student during a class held as outreach while the company was in town to perform.

Norton Center for the Arts recently made the cut for a governor’s award, and its executive director couldn’t be more pleased. Gov. Matt Bevin’s office recently revealed the Norton Center will be receiving the Community Arts Award as part of the 2017 Governor’s Awards in the Arts.

Executive Director Steve Hoffman says this award is particularly important to them.

“While we’re proud of bringing in artists who tour the world, we love that we can bring in local artists from our community to perform before most of our public performances,” Hoffman says. They’ve had student string quartets perform before classical shows, for example, and the Danville Children’s Choir has filled the corridors outside Newlin Hall with their voices.

“It’s a way to keep the community engaged, and we love it.”

Aside from giving local artists a forum to perform in, each year, more than 5,000 elementary-, middle- and high-school students come to Norton Center for matinee performances of main-stage events at discounted rates.

“I love when we talk about the community, that we’re a part of Central Kentucky,” Hoffman says. Its student matinee audiences have come from as far away as Jefferson County, he says.

The Norton Center also offers master classes, lectures, seminars and symposia based on different shows in the season’s lineup. For instance, with the upcoming Jessica Lange Dance show, the dance company will head to the Kentucky School for the Deaf while in town to offer a class to students. Several internationally touring bands have also participated in the outreach program while in town.

“That’s why I developed the program, so students can have the opportunity to jam with and connect with and engage these artists who tour the world while they’re in town,” Hoffman says. He created the additional educational and outreach offerings after he came to Norton in 2010.

Tom Musgrave, communications director with the Kentucky Arts Council, says nominations are accepted all year long from the public.

“We get more nominations than we can award, of course. But if we receive a nomination for someone who doesn’t get an award, it’s kept.” Musgrave says those nominations are brought back out the following year for consideration, then deliberated on by a committee of KAC Board members.

“Then the list is sent to the governor for approval,” he says. Norton Center was nominated by local resident Wilma Brown, Musgrave said.

Brown, who was an 11-year KAC Board veteran until the new administration came in, says she’s thrilled Norton was finally named.

“I think it was about three years ago when I nominated them,” she says, adding she feels the award is incredibly deserved based on the outreach Norton Center does. “I think they’ve done really, really well, and they had some great substantiating materials to submit with their application.”

Brown says Norton Center has achieved so much, specifically under Hoffman’s guidance. “They have special programs they bring children in for, they invite the community in for different seminars. Mandy (Prather) has done a wonderful job, as well, with Steve to make Norton Center valuable to the whole community.”

Prather is associate director of Norton Center and came on with the team in 2011, the year after Hoffman began.

“If you asked Steve, he will be humble about it and say it’s mostly a team effort,” Prather says. “He says this award is not solely his doing, but I would say it’s definitely a recognition of his work in the community and with the college over the past eight seasons.”

Prather said Hoffman’s attitude toward collaboration with the community, faculty, staff and other departments on campus as well as anyone outside of Norton Center and the college affects everyone he works with.

“He has really instilled that attitude in the rest of us. That’s one of the things that really sets us apart from other similar venues across the state — similar venues may just present shows, but we work to engage the community.

“I’m grateful for that leadership because it has allowed all of us to expand our thinking about what the arts can do in a community, on a campus and for the public at large.”

“The artistry here in our Bluegrass region — the artists should be honored as well. We’re very lucky,” Hoffman says.

The next step is the ceremony to honor award recipients, to be held 10 a.m. Feb. 2 in the State Capitol Rotunda in Frankfort. Musgrave says there’s a public reception after the ceremony and folks can meet the awardees and chat with them.

Winners will receive a letter and plaque from Gov. Bevin, as well as a piece which is created each year especially for the award. This year, Mary Rezny, a Lexington artist who is a member of the Kentucky Crafted directory, created “Magnolia” as the awarded piece.

In a release from KAC, Rezny had this to say of the piece:  “For the Governor’s Awards in the Arts, I chose to study a southern symbol that is very familiar to all of us, the magnolia tree. I am drawn to it because of the simplicity and beauty of the blossom and its most interesting and unusual seed pod. I photographed it throughout the spring, summer and fall as the blossom and seed pod developed. The collection is a study of a beautiful flower and the metaphor of transitory change.”

This year’s awards include two new categories. The Emerging Artist award recognizes up-and-coming artists from the Commonwealth, and the Youth Artist award honors a student artist for outstanding achievement. 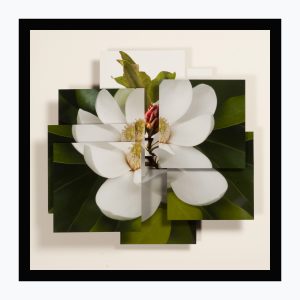 “Magnolia” by Mary Rezny will be the awarded art piece to all 2017 Governor’s Awards in the Arts recipients. 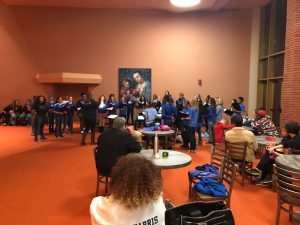 This story has been updated.  STANFORD – A collision on U.S. 150 has resulted in multiple fatalities, according to the... read more