Ben Kleppinger/ben.kleppinger@amnews.com Members of the 2017 Boyle County Rebels football team pose for a photo with an honorary plaque given to them by the City of Danville Monday night. From left are Sam Clark, Luke Gibson, Mitchell Paycheck, Kaden Gervacio, coach Chuck Smith, Will Bramel, Hayden Shepherd and Sam Tiller.

Danville gives Rebels ‘key to the city’ for football championship

There’s too much football success in Boyle County to fit into a single Danville City Commission meeting. 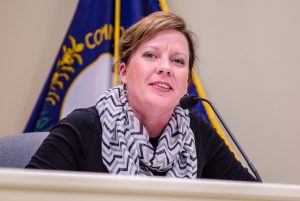 City Commissioner Denise Terry, “a proud Rebel for life,” asked to be the one to read a proclamation commending the Rebels for their championship season.

Terry said when she first began attending Boyle County High School, its football team was nothing to brag about.

But once Terry was an upperclassman, Chuck Smith had arrived for his first stint as head coach of the football program, which lasted 12 years. Terry couldn’t say enough good about Smith’s work building the Boyle County football dynasty. 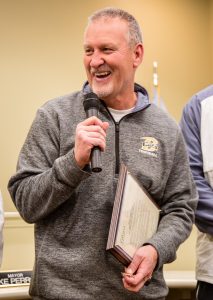 Ben Kleppinger/ben.kleppinger@amnews.com
Boyle County football coach Chuck Smith laughs while talking about his teams success on the gridiron in 2017.

“He took those boys who had not won games and made them into champions,” Terry said. “… Coach Smith conducts himself on and off the field in a very humble manner. He has high standards; he also applies those standards to himself.”

Smith and seven senior Rebels attended the commission meeting and were presented with an honorary plaque, as well as pins that represent the “key to the city.”

The seniors who attended shared some of their plans for after they graduate — lineman Will Bramel will be attending Purdue to play for the Boilermakers; Kaden Gervacio will be staying in Boyle County and playing at Centre College; Mitchell Paycheck is headed to Georgetown on a track-and-field scholarship …

Mayor Mike Perros said he is still “in awe” that both high schools from Boyle County were able to bring home state championships in the same year. And he said Smith is due a lot of credit for Boyle County’s success.

“These young men are a reflection of you. Yeah, it starts with good parents, but the coach is the one that sets the tone.” 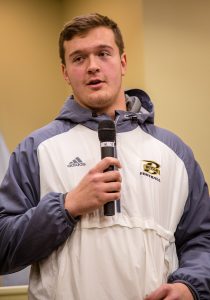 Ben Kleppinger/ben.kleppinger@amnews.com
Will Bramel helped the Boyle County Rebels win a state championship in 2017; in 2018, he’s heading to Purdue to play college football. Bramel said his major will be “marketing, business — something like that.” 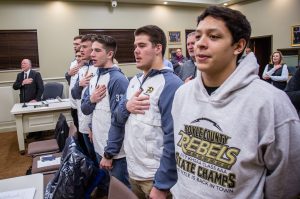 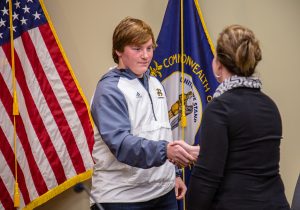 Norton Center for the Arts recently made the cut for a governor’s award, and its executive director couldn’t be more... read more