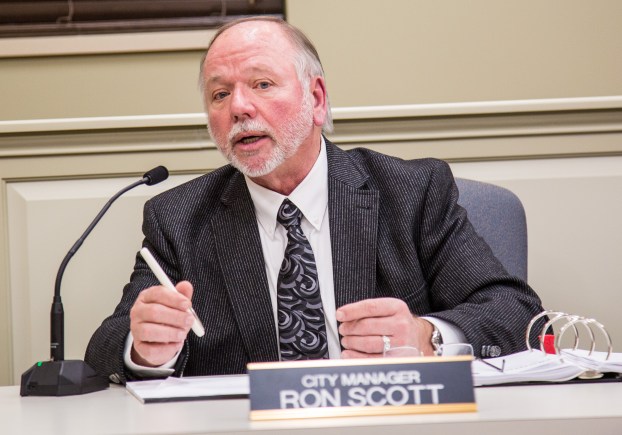 Ben Kleppinger/ben.kleppinger@amnews.com Danville City Manager Ron Scott talks about an increase in payments to the County Employees Retirement System (CERS) that the city may be required to make in 2018-19.

Danville’s budget could be strained by increased pension payments

Danville may owe in the neighborhood of $700,000 in additional pension payments next fiscal year, which will place a big strain on the city’s budget, City Manager Ron Scott said this week.

Scott warned city commissioners at their first meeting of 2018 that the larger payments due to the County Employees Retirement System (CERS) could get in the way of other city priorities.

“We are going to have, I think, a challenge, unless we get some additional revenue sources in terms of meeting all of the required or desired expenditures in the year ahead,” Scott said. “This is going to be probably the tightest budget year that we have had largely because of that imposition of the $700,000-plus annual pension contribution — and that’s the revised downward calculation.”

Scott explained after the meeting that the City of Danville is paying in the vicinity of $1.38 million to CERS this year. Those funds go to pay for the pensions and health care plans of retirees and current employees who are on a pension plan. That amount is determined by taking a percentage of the total salaries paid by the city.

The new, “overly aggressive” rates chosen by the board are not necessary for governments like Danville that use CERS, Scott argued, because “actuarial studies point to the fact that the CERS is relatively well-funded and is already — without any additional increase in contributions being required — on a path of solvency.”

The new rates from the board are expected to bring in an additional $108 million in new contributions to CERS from Kentucky cities, Scott said, citing an article from the Kentucky League of Cities.

Scott also noted Danville is required to contribute to CERS based on its entire payroll, even though new employees hired since Jan. 1, 2014, are no longer eligible to be part of CERS. Instead, newer employees are enrolled in “defined contribution” retirement plans that guarantee an annual benefit of 4 percent but don’t provide guaranteed retirement benefits for life like a pension.

“Unless the … pension contribution rates for next fiscal year are modified to be less aggressive — and/or new revenue sources are granted to cities … perhaps the restaurant tax … many cities throughout Kentucky are going to have difficulty in varying magnitudes in making the required pension contributions next year,” Scott said Tuesday.

Currently, only certain classes of city in Kentucky are allowed to implement local sales taxes on restaurant bills. Danville officials have expressed interest in supporting efforts to expand the law in this area so that Danville could also implement a restaurant tax.

At a November retreat meeting of the city commission, it was estimated that adding a 3-percent restaurant tax in Danville could bring in around $1.5 million for the City of Danville and $400,000 for the local Convention and Visitors Bureau. Danville would have to spend those funds for “economic development” purposes, but that could still relieve budgetary pressure by freeing up general fund money currently spent in economic development categories.

During Monday’s commission meeting, Mayor Mike Perros asked if the extra cost for pensions was going to get in the way of other things Danville planned to accomplish.

In 2017, the city passed a pair of tax increases on payroll and net profits taxes in order to fund a lengthy list of projects and upgrades, including replacement of a bridge no longer rated for fire trucks to cross; replacing the crumbling downtown fire station; purchase of a new ladder fire truck in order to maintain the city’s ISO insurance rating; and implementation of energy-savings upgrades. The tax increases are projected to bring in around $2.2 million in new revenue annually.

“So those things that we were hoping to do, and the reason that we took the step to pass tax increases last year — those things now go away?” Perros asked.

“We can fund and hopefully continue to fund hopefully some of those,” Scott answered. “… One of those, as you might recall, was the desire to more adequately staff our 911 center.”

“But the bottom line is this proposed pension assessment … basically sets us back to where we were a couple years ago,” Perros said.

“Well, in terms of flexibility of revenue, I would say it does,” Scott said. “We certainly have more revenue … it’s not all gloom and doom, but when anybody is handed a three-quarters-of-a-million-dollar additional assessment in addition to what we’re already paying, it’s a sobering thought in terms of how we best deal with that.”

Scott said further complicating the matter is the fact that legislation has been introduced for this year’s general assembly to consider that “talk about repealing some existing authorities that we have as cities to levy some user taxes.”

“We’re going to have to, I think, make an effective case that for Kentucky to succeed, its communities must succeed,” Scott said.

Danville officials want input from city residents on their priorities and desires as they begin to work on a budget for the next fiscal year, Scott said.

He encouraged people to visit the city’s website, danvilleky.org, and click on “citizen survey” to participate in a survey.

So far, 168 Danville residents have filled out the survey, which Scott called a “good beginning” but said it’s not as many responses as the city wants.

“We want to use the results of that survey to consider as we get into our budget process,” Scott said.

The city will also hold at least one public meeting for the purpose of public input on the budget planning, but the survey will provide a “backdrop” of information on what local residents think, he said.

“We’d like to have that information in before we get too deeply into the budget preparation process.”

The Kentucky Retirement Systems board is requiring increased payments to the County Employees Retirement System (CERS) in the 2018-19 fiscal year. Area cities are expected to owe the following amounts in addition to what they already pay for nonhazardous-duty and hazardous-duty pensions and health care plans:

Although there’s been a bit of unseasonably warm temperatures the last two days, the bitter cold is supposed to return... read more