Question: Jerry, here’s a puzzle for you. Do you have any idea what this elephant is for? He is 6 inches tall, made of a heavy, dark metal which I assume is bronze, and hollow inside, including his legs. The pierced dome on his back lifts off. I thought it might be for burning incense, but there is no indication it was ever used for that, as the inside is clean. Details are sharp, from the elephant’s toenails to the tassels on his elaborate “saddle.” We inherited this from my husband’s grandmother many years ago, but no one in the family remembers where it came from or when. Can you solve the mystery for us? 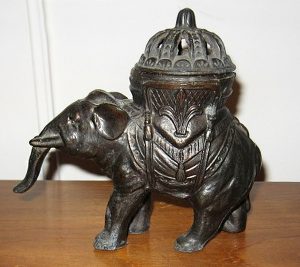 Answer: You are absolutely correct! You have a really cool incense burner. Many often think of the hippies of the 1970s burning incense. But did you know that incense had been used in religious and non-religious ceremonies for thousands and thousands of years?

The word incense comes from the Latin word incendere meaning to burn. Incense was and is very important to the Jews, early Christians,

Egyptians, Chinese, Romans and the Greeks, and in some form or fashion, to just about every culture and religion on the planet.

It’s thought that its smoke sent messages or prayers up towards the heavens to please the gods. It was thought also to rid a house or person of negative energy or spirits.

Incense is nothing more than aromatic plant ingredients, essential oils and usually some type of resin to help it to burn. Formed into cones, like you’d use in your elephant, sticks, papers or powder that would be sprinkled on glowing embers.

Aromas can range from the ancient, like myrrh and frankincense to more modern versions like strawberry and coffee.

You can imagine that the holders have taken on just about every imaginable form you can name. The form of an elephant is one that is very popular and sacred to the people of India. For all my talk on the ancient times, I would think that your elephant incense burner would date from the early 1900s to the 1920s. It is well cast and the details are sharp and clear. I’m unsure about the bronze part. He could be

a white metal with an applied bronze patina. Stick a magnet to him and see if it sticks. If it does not stick, there’s a good chance that he’s bronze or a non-ferrous metal.

I wish that trunk was up. Elephants with their trunks up are considered extra good luck. I’d think in a store environment he would be priced at about $25.

By the way, don’t ever attempt to polish him. The value will be ruined and so will your elephant. Thanks for sharing.

100 YEARS AGO — 1918 January first is always called moving day, but judging by the many wagon loads of... read more