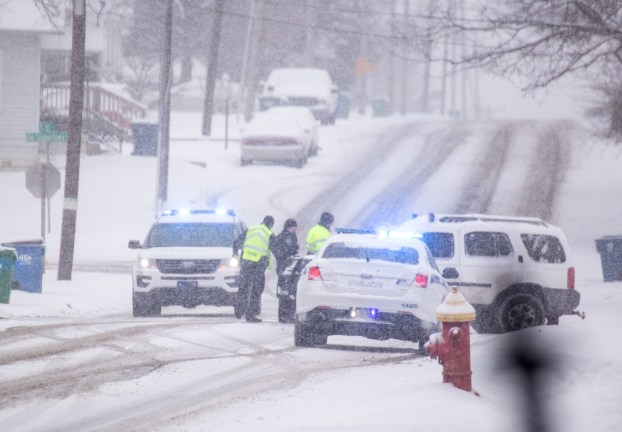 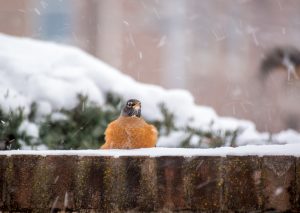 Ben Kleppinger/ben.kleppinger@amnews.com
A robin’s feathers are ruffled by wind as it perches near a bush where it was hunting for berries Tuesday afternoon. Wind chills on Tuesday got as low as -1 degree Fahrenheit, according to the National Weather Service.

Boyle already had about four inches of snow on the ground when an additional three landed on Tuesday, said Danville-Boyle County Emergency Management Director Mike Wilder.

Wilder said other than a few instances of cars sliding off the road, it had been mostly uneventful Tuesday as far as travel is concerned.

“There have not been a lot of accidents. That comes from people realizing conditions are as they are and they do slow down,” Wilder said. 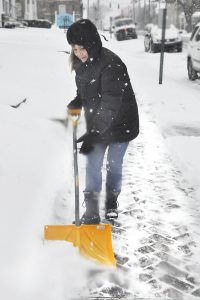 Photo by Robin Hart – Lora Hogue shovels snow off of the old brick sidewalk in front of her business Hairscapes on Broadway. She said the uneven brick makes the chore harder.

On Monday evening, a state salt truck slid off the road and turned onto its side on Ky. 33, Wilder said, and a tow truck was used to get it out. He said road crews were working diligently, but snow had been coming down too quickly to keep up with on Tuesday morning, making their jobs more difficult.

“Hopefully, when the snow quits falling, they’ll get ahead of it,” Wilder said. “The snow has to quit falling first.”

By 4 p.m., the skies had cleared somewhat and forecasts were not calling for any more substantial snowfalls.

A few people were transported via EMS for their dialysis treatment from a local nursing home, Wilder said.

Wilder encouraged everyone to use caution as they traveled. 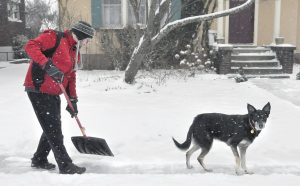 Photo by Robin Hart – Matthew Hallock works to clear the sidewalk in front of his home on St. Mildred’s Court early Tuesday morning as his dog C.J. keeps him company.

“You’ve just got to slow down, take your time. If you’ve got to be somewhere, leave much earlier so you don’t have to rush,” he said. “Always take with you some type of kit — flashlights, blankets and water for safety, especially in weather like this.”

Courtesy of the Boyle County Detention CenterDarrell Cornett What was anticipated to be a bond revocation hearing for Darrell Cornett... read more