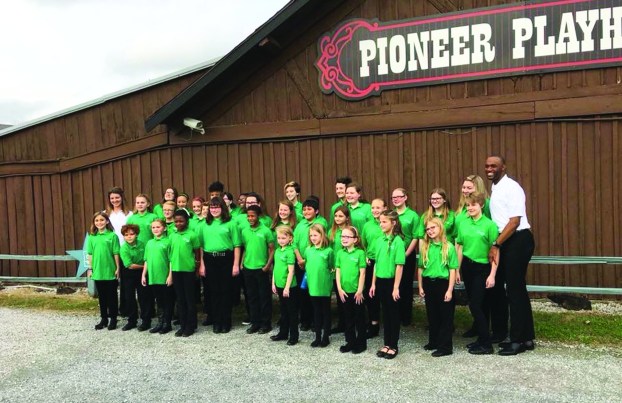 “There’s been a decrease in singers from Danville and very near communities, while there’s been an increase from places like Nicholasville,” Hall says, who worked to get area choral groups up and running again.  “We are hoping this will change with new singers joining next week.”

The meeting held for interested new singers for the children’s choir will be Jan. 22 at Lexington Avenue Baptist Church, and Hall hopes to pack the church with new faces.

“They conduct their own choirs,” says Hall, which both fall under the Danville Children’s Choir umbrella. “But the groups usually do one or two pieces together, which Ron usually conducts.” Hall says the two leaders work together great as a team on all of the operational needs.

“So both groups know both conductors very well, especially after the tour to Atlanta last spring,” she says.

One returning face will be Caroline Asher, now 8, who began with the choir at just 7 years old. She’s a third-grader at Woodlawn Elementary School, and says kids shouldn’t be scared to come try out for the choir.

“It’s fun, because I don’t have to sing by myself,” Caroline says on a phone interview, with her mom, Joy, standing by. Joy Asher says her daughter has always loved to sing — she sings with the radio, television …

“She even hums when she eats,” Asher said.

“Because if I sing it by myself …” Caroline continues, explaining why she loves choir, “…then I won’t sing as confidently.”

Her mom says she’s also developed quite a relationship with choir leader Wilbur. 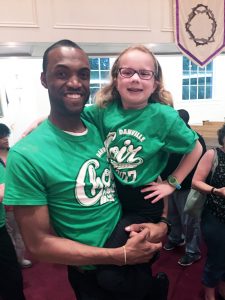 Ron Wilbur, who is one of the choir leaders for the Danville Children’s Choir, poses with choir member Caroline Asher. Caroline’s mom, Joy Asher, says her daughter and Wilbur have a great relationship, and she would urge any interested children who think they may like to sing to join.

“They just hit it off, and he’s so good with children,” Asher says. She says they took a competition trip together to Atlanta, and went on some side trips, like to Six Flags. But what she remembers most is the Martin Luther King Jr. National Historic Site, and touring the museum there.

“She and Ron really bonded on the bus afterwards, talking about what they experienced there. It was really nice,” Asher says.

“It’s really not an audition. They just meet with you, hear your voice and your range and how you interact with them,” she says. “Caroline had a little bit of hesitation before she started, but she was very excited. I feel like she’s a more mature, confident singer now. Her pitch and rhythm are stronger, and she has a wider range. The world is her stage, she’s always been like that, but she says she definitely feels more confident now.”

“One time, when we went to a concert, after hearing my sister sing — it sounded really, really good,” Daniel says. “She’s awesome and singing a lot more. I didn’t have really high expectations, but I was impressed.”

Daniel is also a fan of Wilbur.

“Every time we go to drop Caroline off at practice, Mr. Ron will pick me up and give me a humongous hug. It’s just how he is,” Daniel said.

“And Mr. Ron made me feel very happy after I first went,” Caroline adds, about her first time checking out the choir at 7.

The choral groups Dr. Hall has helped revamped are important to her, and what music can do for children is part of the reason. As Stodghill Professor of Music, Emerita with Centre College, she has made music her life, and she feels like it’s a worthwhile venture for anyone to go forward with — because music gives back, she says.

“Every child responds to dancing, singing along with recording, films, television shows. It’s all music, and it builds on helping them to express themselves in a positive, natural way. Music engages the heart, mind and body. Not to mention, it’s a wonderful educational and fun experience for them.”

Hall says Danville Children’s Choir dates back to 1990. The original choir was started by Bruce Richardson (who now owns Elmwood Inn Fine Teas), and boasts several alumni who have gone on to study music in college.

A huge success story Hall likes to share is Lydia Graham, of Danville, who sang in the choir through her senior year of high school. Graham is now at the Julliard School as a vocal performance major.

In the last six years, the choir has taken tours to Indianapolis, Cincinnati, Florida and Atlanta and have had wins in competitions spanning over five years. The group has performed with the Lexington Philharmonic Orchestra and American Boychoir from Princeton, New Jersey. “Nationally, only 1 in 5 children are able to sing in a choir, and we want to keep that option — which is  inexpensive, fun, challenging, academically enriching and musically rewarding — available to children in Danville and Boyle County,” Hall says.

Hall says nationally, there are more than 270,000 choruses involving more than 42 million people. Danville, she says, probably has more than 15 choirs of all kinds, some of them with regular weekly singing almost year-round, and others which gather only for special events.

“Research shows singing in choirs has remarkably broad positive impacts on both adults and children,” Hall says. Children who sing show improved reading and spatial reasoning, improved self-confidence and social behavior, and are more likely to be team oriented. “They gain reading proficiency, exposure to other languages and cultures, become better listeners and a gain sense of working toward a goal.”

“I would just say it’s fun,” Caroline says. “Ron is nice, and he’s a good leader. He’s really funny and really nice. And I like it better when we’re all in a group. When we’re all together, we’re singing together, and I’m not singing by myself.”

Hall says, “We feel like all children can sing. It’s such a natural and powerful way to express themselves. And if you haven’t been to a concert, you’re missing out. There are quite often tears shed among the singers, parents and even conductors.”

An open rehearsal for new and returning adult male singers for Resonance was already held, but new members may also join the first rehearsal 7 p.m. Jan. 22 at First Christian Church, at the same time and place Jan. 22.

New members are also still welcome for Sounding Joy, the adult female group,  at the 7 p.m. rehearsal Thursday in the Audrey Gillespie Recital Hall, in the basement of Norton Center for the Arts.