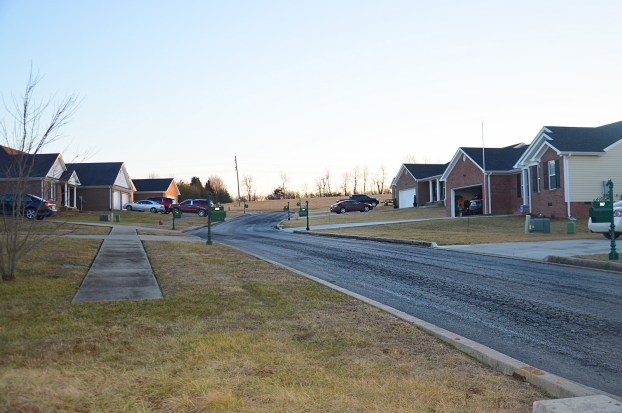 P&Z will hash out Hunt Farm roads next month

Danville-Boyle County Planning and Zoning has seen its fair share of interesting cases and issues in recent months, and February will be no different. According to P&Z Director Steve Hunter, P&Z commissioners will tackle the complicated subject of roads and sidewalks in the Hunt Farm subdivision at their Feb. 7 meeting.

“What we need to get is a solution to get this done in a timely fashion,” Hunter said on Wednesday.

The Hunt Farm subdivision, off of Buster Pike South near Shakertown Road, has been in the works since the original preliminary plat was filed in 2006, Hunter said. The issue is this: Even though there are more than a dozen homes built in three phases of development, and people have been living in the subdivision for years, the roads have never been brought up to code and sidewalks that were promised in the subdivision plans have never been built.

Until the roads have a final surface on them, Boyle County can’t accept them into the county road system, meaning services like snow removal won’t happen, Hunter said. And without a final surface, the base layer of asphalt is prone to crumble away — some of that deterioration is already happening, he said.

But streets and sidewalks are expensive to build and there’s disagreement between the owner of the subdivision land, Joedy Sharpe, and local officials over who is on the hook to finish the job.

When a developer makes plans for a new subdivision, P&Z requires a bond on the work that would in theory provide enough money to finish the work should the developer abandon the project for one reason or another, Hunter explained.

In the case of the Hunt Farm subdivision, Sharpe provided P&Z with a “letter of credit.” After the Hunt Farm preliminary plat had been renewed five times without Sharpe completing the required work, P&Z cashed that letter of credit for $52,000 in 2011, Hunter said. The money has been sitting in a special account since then, and nothing has been done to finish the subdivision’s roads.

Hunter said state law and court precedents are clear about the situation: P&Z can hold a bond, whether it’s a letter of credit or regular cash, in order to “backstop” a project and incentivize a developer to complete its work. But holding that bond does not make it P&Z’s responsibility to finish the developer’s work, he said.

Sharpe disagrees with that perspective, according to Hunter and a June 2016 letter sent by Sharpe to the P&Z Commission. 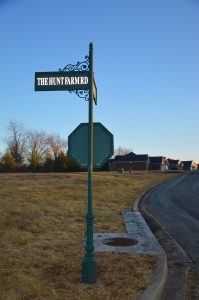 “With the act of accepting and cashing the letter of credit for the Hunt Farm development, the Danville-Boyle County Planning and Zoning Commission assumed complete responsibility for fulfilling the obligations” to finish the roads and sidewalks, the letter reads. “… As with a performance bond, this work should have been bid, contracted and completed immediately after acceptance of the letter of credit.”

The Advocate-Messenger reached Sharpe at the phone number for his business, Joedy Sharpe Construction Company, on Thursday, but Sharpe declined to comment on the current situation. He also declined to refer the newspaper to any attorney representing him in the case.

Holding a bond on the project assures “that we have money here at the planning commission that if something goes wrong, we can get this finished,” but “it is not our responsibility to finish it,” Hunter said Wednesday.

Hunter said because the roads haven’t been finished and accepted by the county, they’re still technically private property, which means P&Z doesn’t really have the right to go on the property and work on the roads.

Further complicating things is the years-long delay since the letter of credit was first cashed. Hunter said $52,000 may have been enough to finish the job in 2011; but based on current prices for paving, it’s highly doubtful that amount would be enough to do it today.

There are a lot of different outcomes that could come out of the Feb. 7 P&Z meeting, Hunter said:

• commissioners could come to an agreement with Sharpe, with plans for Sharpe to finish his work;

• commissioners could decide to try to finish the project with funds from the letter of credit, though how it would be enough money is unclear;

• commissioners could decline to take further action at this time;

• commissioners could refuse to renew Sharpe’s preliminary plat for the rest of the subdivision, essentially shutting down any further development until Sharpe completes work on the existing roads;

• commissioners could consider suing Sharpe to force him to complete the work;

• commissioners could decide to finish the work, but file liens on unsold plots in the development for any cost beyond the cashed letter of credit.

Hunter said that last option is “an aggressive step and I don’t recommend that, but we could do that.”

Boyle County Magistrate Jack Hendricks said Tuesday he is paying attention to the situation. Hendricks is expected to attend the Feb. 7 meeting.

Hendricks was critical Tuesday of the initial creation of the Hunt Farm subdivision plan, which was approved with 149 lots on it. 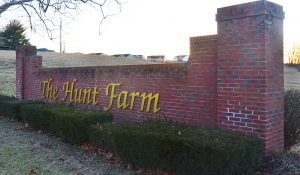 “This is what we’ve got to change,” Hendricks said. “Anybody in Boyle County with any common sense knows you couldn’t fill this size subdivision up in my lifetime. So why would we accept a preliminary plat this big?”

Hunter is on the same page with Hendricks on that issue — he said Tuesday developers should ideally be submitting smaller phases to P&Z and completing them before moving on.

Boyle County Judge-Executive Harold McKinney said the situation has to be resolved for the sake of the people living in the subdivision.

“We’ve got to get it fixed. Those folks … deserve a road, they deserve what they were promised,” McKinney said Tuesday. “And I think we’ve got to move forward, but I think the impetus has to come from Planning and Zoning.”

Hunter said Wednesday he thinks the February P&Z meeting will provide that impetus and move everyone closer to a solution.

“We need to all sit down and come up with a plan, that’s all we need — timeline what he’s going to get done,” Hunter said. “But right now, his letter that ‘I’m not doing it; it’s your responsibility’ is not a plan at all. And pointing fingers back and forth isn’t a plan. What we need to get is a solution to get this done in a timely fashion. And then let him keep building his subdivision. It’s a good subdivision; let’s keep on going.

“Feb. 7 will be interesting because Mr. Sharpe will be there, the magistrate (Hendricks) is going to be there, I’m going to be there. We’re going to lay all this out in front of the planning commission. Hopefully some of the neighbors from the subdivision are there, and we can get this ironed out one way or the other. It’s not our goal to hold this money for the next 10 years.”

The next meeting of the Danville-Boyle County Planning and Zoning Commission will be 9 a.m. Wednesday, Feb. 7 at Danville City Hall.