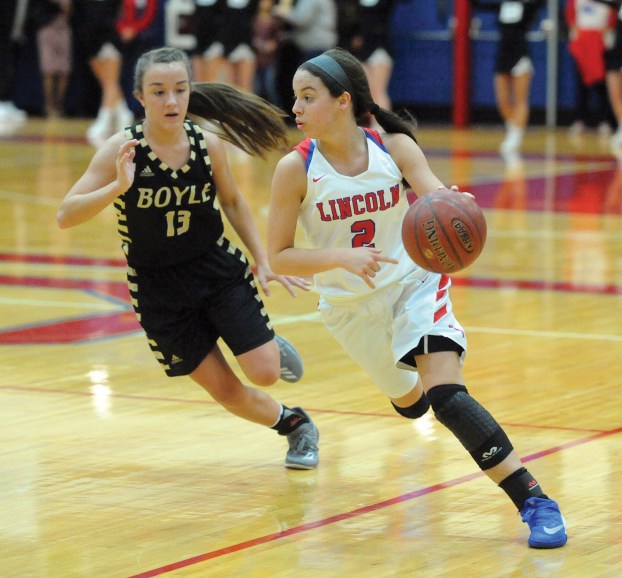 STANFORD — Lincoln County has blown through the 45th District so far this season.

The Patriots are still undefeated after an 80-48 victory over previously unbeaten Boyle County on Friday in Stanford.

Through three district games this year, Lincoln has won by an average of 35 points per game. Friday’s game was no different, as the Patriots jumped out to an early 23-15 lead after eight minutes.

“We really came out aggressive in our press the way I wanted us to,” Lincoln head coach Cassandra McWhorter said. “We really used our length and our quickness to our advantage, so I was really excited with how we started the game. We started with energy and intensity that I wanted to and we kept it up the whole game.”

Emma King led all scorers at halftime with 17 points, with four coming in the final five seconds of the half. The Patriots led 50-30 at the break.

“I thought we competed tonight in the first half, we were down eight points there with a couple minutes left in the first half,” Boyle head coach Greg Edwards said. “It went from eight to 18 just because we didn’t take care of the basketball.”

Edwards said the run at the end of the second quarter was unfortunately familiar for his team.

“Lincoln always has one or two runs on us that kind of puts us in a hole,” he said. “We’ve just got to keep working on that, try to get better and just compete. That’s what I told them. I thought we had three or four people who competed tonight, we’ve got to get the whole team competing.”

The Rebels threw multiple different looks at Lincoln’s offense — they faceguarded King and Kaitlynn Wilks in the post, sometimes going zone and other times going with a box-and-one.

But the Patriots took it in stride, even as Wilks and fellow starter Maddy Boyle went out of the game with foul trouble in the first half.

“They were trying to run a triangle and two, trying to take Wilks and Emma out of the game,” McWhorter said. “We’ve seen it and I was kind of expecting to see something like it, but I was proud of our other girls like Zaria Napier, Trinity Shearer, Maddy Boyle and Anna Lane when she came in, stepping up when they needed to, making sure that you can’t take those two out of the game, we’ve got others who can score as well.”

King led all scorers with 21 points on the night, but Napier wasn’t far behind, finishing with 17. Boyle had 14 for the Patriots and Shearer added 11.

McWhorter said her team’s experience and willingness to move the ball resulted in so many open shots for her squad.

“I think it’s a little bit of experience and they’ve seen a lot of different defenses throughout the year,” she said. We’ve had people try box and one, triangle and two, 2-3 zone a lot this year. We’ve seen a lot of different looks this year, but I think it comes down to ball movement. Our team chemistry right now is really good, we’re not caring who does what with the ball or who’s scoring, we’re just moving the ball, finding the open person and they’re stepping up and making shots.

Edwards named a trio of players who stood out to him on a rough offensive night.

“I thought we had a good gameplan, we did some things well,” Edwards sadi. “But King, she’s an all-american type player, I thought Danielle Roney played big, offense and defense. I thought she battled. I thought Lauren Steinhauer battled, Kasey McGirr came in and battled, we’ve just got to get everyone to do that.”

Roney led the Rebels in scoring with 13, but she was the only Boyle player in double figures. Gracie Edmiston had eight points and McKayla Baker and Rachel Leath each scored six.

Edwards said his team was better on the glass in the second half but still had too many lapses on the defensive side of the ball.

“It’s not always on the offensive end,” he said. “We weren’t making shots that we might normally make, but on the defensive end, we’ve got to pick that up. Rebounding was a bit better in the second half, but in the first half we gave them too many second shots.”

Lincoln will stay undefeated in district play before two district games next week: Wednesday at Boyle and Friday at home against Garrard.

“I think we’ve had some bumps along the road, I think any team will, that’s why you play the season,” McWhorter said. “Everything’s not going to go perfect. But I think we’re peaking at the right time, we’ve got games coming up that are important region games coming up, but as we get near tournament time, I think we’re starting to get some things down and do them correctly the way we need to.”

Edwards said he still likes where his team is, 15-5 and just one loss in four district games.

Boyle County, Danville and Lincoln County had their last “home” meet of the season on Thursday at Centre College. The... read more