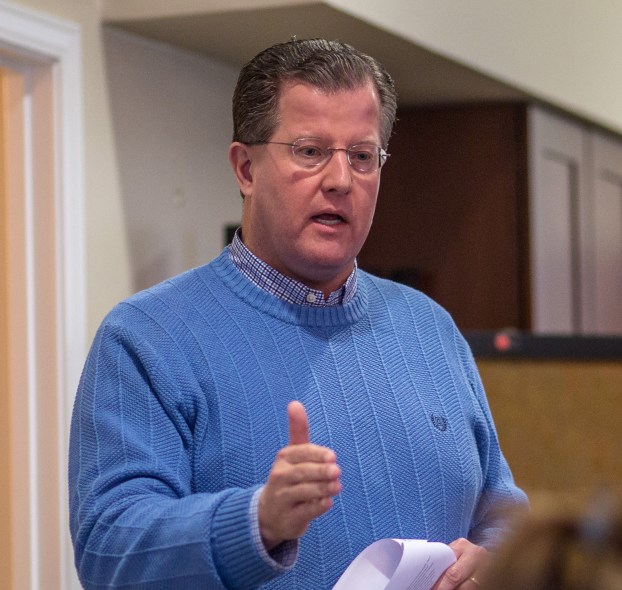 Ben Kleppinger/ben.kleppinger@amnews.com Jody Lassiter, president of the Danville-Boyle County Economic Development Partnership, speaks during Wednesday's meeting of the EDP board.

Pipeline plan a ‘Sword of Damocles’ over Boyle

The stalled plan to repurpose a natural gas pipeline that runs through Boyle County is having a “chilling effect” on economic development in the area.

That’s one of the main arguments in a new “template letter” the Danville-Boyle County Economic Development Partnership has distributed to its members. The letter provides basic arguments for EDP members and public officials to use when contacting Kinder Morgan, the company that wants to use Tennessee Natural Gas Pipeline No. 1 to transport natural gas liquids (NGLs).

“NGLs are multiple times more explosive than natural gas. NGLs contain multiple known carcinogens that enter drinking water. NGLs are heavier than ambient air so they ‘pool’ near the ground and create serious risk of asphyxiation and explosion or individuals near a leak,” the template letter, composed by local attorney Mark Morgan, reads. “It is important to recognize that NGLs are not fuel, which helps with U.S. energy needs. NGLs are waste byproducts from fracking operations in Pennsylvania. Kinder Morgan is trying to find customers to purchase these fracking byproducts so they can be converted to low-grade plastics.”

Jody Lassiter, president of the EDP, told board members this week that the regulatory agency responsible for the natural gas pipeline, the Federal Energy Regulatory Commission (FERC), has allowed essentially “indefinite” time for Kinder Morgan to delay its plan while it looks for a customer.

“So our strategy now would be as a community — ‘please don’t let the Sword of Damocles hang above our head for months, if not years, to cloud the environment for our economic development,” Lassiter said. “Kinder Morgan is really not compelled at this point to implement the plan because they do not have a customer for the NGLs to be piped through the pipeline. So we could be discussing this five years from now, 10 years from now.”

Lassiter said during that time, the pipeline could be left empty and unused.

“Like houses, and in this case I would say old houses — it (the pipeline) is 70 years old — things can start to fall into disrepair when they’re not in use,” he said. “… That would be empty since it is now abandoned until the NGLs begin to flow. But there’s no customer yet. So our approach is, ‘please make a decision, or, Kinder Morgan, please withdraw your plan.'”

Danville Mayor Mike Perros asked Lassiter how much of a problem the Kinder Morgan plan has caused so far for local economic development efforts. Lassiter said, “The best I can answer to that, because that’s really a speculative question, is it’s never been raised to us by a project to date.”

The template letter states that “during the three years while this project has been proposed, Danville and Boyle County, Kentucky, had had to pursue our goals while the cloud of this project thwarts our efforts towards economic development, job creation, physician recruitment, recruitment at our local colleges, recruitment of retirees to locate in our community and businesses to invest in our Main Street and downtown properties.

The template letter includes a paragraph encouraging each EDP member that wishes to use its contents to personalize the letter with unique perspectives from that member agency.

“If enough of these demands are made, with the difficulties Kinder Morgan is having in marketing NGLs, then KM may acquiesce and abandon this project,” Mark Morgan writes at the end of the letter. “My goal has been to provide background information and a format that can guide these discussions.”

According to National Public Radio, the “Sword of Damocles” is a reference to a story from the fifth century B.C.E., in which a courtier named Damocles is allowed to sit on a tyrant’s throne and enjoy everything the tyrant got to enjoy. But a sharp sword was hung above the throne, suspended by a single horse hair, so that it might fall on Damocles at any moment. Damocles asked to return to his lower station in life in order to escape the threat of the sword.

South side of Ky. 2168 chosen for trail expansion The final design for an expansion of the walking and biking... read more