There was lots of news in Danville in March of 1856, according to a copy of the Kentucky Tribune.

Clarence Coleman, post office inspector of Danville, shared his copy of the newspaper that was 72 years old then and was in fair shape, which was proof of the good quality of paper which was used in the ante-bellum days.

The issue was Vol. XII, showing the Tribune was established in 1843.

The Tribune did not cover neighboring towns, except for personals about visits and who was doing what. The space was given to foreign news, Congress and state newspapers.

The news of the day included:

An obituary  of John Mershon, a veteran of 1812, who died in Wayne County; Kentucky Legislature passed 820 acts at its late session; Abolitionist Garrison expressed a wish to have all the slave states turned out of the Union; and the death of a young man who fell from a tree.

Political news was given the greatest attention in the newspaper which is advocating the cause of the American or Know Nothing Party in which Laxasus W. Powell was expected to win.

A meeting notice called attention to the fact that the “American” of the West End will hold a ratification meeting in Perryville on March 29.

The Know Nothing Party was active throughout the country and predictions are that Fillmore and Donelson will be elected, however, it  remained for James Buchanan of Pennsylvania and John C. Breckenridge of Kentucky, nominees of the Democratic Party, to sweep the country and the death knell of the newly formed party was sounded.

A proposed Whig convention was set in Lexington. Joshua F. Bell and Beverly D. Williams of Boyle County belonged to the party, which had been strong throughout the nation and elected two presidents, William Henry Harrison and Zachary Taylor.

Numerous candidates were running for a seven -member town trustees.

About 70 percent of the space of the March issue was devoted to advertisements that included stallions and jacks, candidate cards, plantations for sale, dry goods, groceries and others.

Crab Orchard Springs, under management of J.H. Caldwell, was one of the great watering places in the south, advertised.

The Batterton House of Danville, the Riffe House in Hustonville offered rooms for rent. G.H. Withers, proprietor of the Boyle Gardens in Danville offered nursery stock.

Railroads, including the L&N and Louisville and Frankfort listed schedules.

R.J. Breckinridge of Danville offered to rent a plantation on Hustonville Pike, five miles from town. Corn meal at Mock’s Mill was offered at 35 cents per bushel.

The advertisements also included people buying and selling slaves. A Lexington man wanted a “few Negros, both sexes, between 12 and 25 years old.” 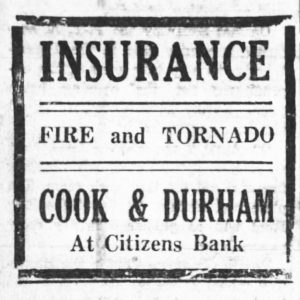 An advertiser in New Orleans said admirers of the late and much loved Henry Clay, the Great Pacificator, were raising funds for the erection of a monument of Clay in their city.

The Tribune was published weekly on North Third Street by John F. Zimmerman & son. Cost was $2 per year in advance, $2.50 for six months and $3 at the end of the year. 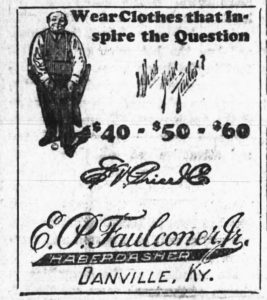 The copy of the Tribune was found by Junius Hancock in and old building occupied as the Hancock Hotel in Columbia. The subscriber was Col. T.C. Bramlette, a veteran of the Mexican War, and  officer in  the War Between the States, and was elected governor of Kentucky in 1863.

100 YEARS AGO — 1918 The business people of Danville and Boyle County are certainly loyal and patriotic, and no... read more