Question: Dear Jerry, I would like your opinion of this old dough bowl that was purchased in Missouri about 20 years ago. I’ve never seen one that’s been painted, but this paint looks very old and the bowl seems well-used.

The white paint inside is mostly worn off. Initials ANS are stamped twice in the bottom of the bowl. Would that be the maker? Do you suppose it was really used for mixing dough, or did someone paint it for decoration?

Forgot to say that the dough bowl measures 26″ long by 13″ wide. 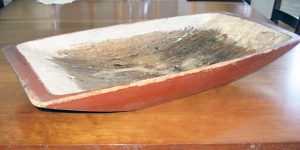 Answer: Of course dough bowls were used for dough. I imagine that they were used often too. Everyday in fact. Bread now is considered merely another nasty carb, when it was once the staff of life. Bread making was one of the first and most important skills that a young woman learned, some men too.

Collectors today love dough bowls for their primitive look and the ability to store things in a decorative manner.

Your bowl puzzles me, however. I’ve never seen a dough bowl that was painted on the INTERIOR. Outside, sure. Anywhere a hard working housewife could grab a little happiness or creativity, it was usually in the form of paint. At the time, it was likely brighter and bolder, without the hand of patina to change it.

The red paint on your bowl shows wear but not age. Again, its the white-painted interior that stumps me.

An early homemaker or craftsman would have know that this bowl would have been scraped and scrubbed out on a regular basis, so why paint it? Who wants paint in their bread?

The initials are also slightly alarming. Sure, they signed, carved and stamped things from time to time. But this is double stamped. Is it a maker or owner?

This is the bad thing about photos. I can’t really see it, feel it or smell it. Yes, smell is important too.

Here is what I think, working with what I have. I think you have a old dough bowl, likely imported from Eastern Europe where such things are still plentiful. But at some time, someone smeared a coat of desirable red paint on its outside and added an interior of white. They then set up “wearing and scrubbing” off the old paint to give it an aged appearance. So it’s kind of new and old. That’s what I think — it’s an old bowl with new-ish paint.

I’d think that in a nice antiques or gift shop that you’d see this bowl priced at about $75. It’s still beautiful! Thanks for sharing it.

100 YEARS AGO — 1918 Notwithstanding the very disagreeable weather, there was a splendid crowd of more that 200 people... read more