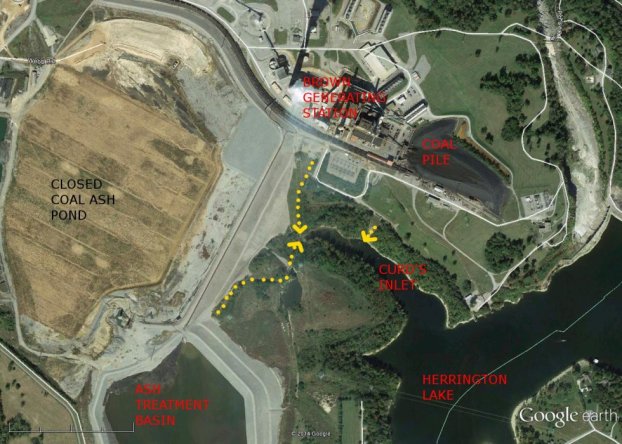 The first step in an appeals process has been filed in a case against Kentucky Utilities, brought by groups concerned about the coal ash pollution in Herrington Lake. Thomas Cmar, an attorney with the non-profit EarthJustice, filed the appeal on behalf of the Kentucky Waterways Alliance and Sierra Club.

In December, U.S. District Judge Danny Reeves ruled his court has no authority over the case. The suit was filed in October; its complaints were based on two federal acts, The Federal Clean Water Act and the Resource Conservation and Recovery Act.

“We are disappointed that the court did not find that citizen groups, such as Kentucky Waterways Alliance and Sierra Club, have the right to go to federal court to challenge Kentucky Utilities’ ongoing pollution of Herrington Lake,” Cmar said.

The focus of the lawsuit is millions of yards of coal ash buried behind E.W. Brown Generating Station, located in Mercer County. The suit wants KU to take responsibility for what the groups call high amounts of toxins found in the lake. They allege the toxins are shown to be affecting fish.

According to Cmar, the groups have attempted to get KU to accept responsibility for the pollution and create a solution for more than four years.

The ruling dismissing the groups’ case against KU stated that “Congress determined that regulation of groundwater should be left to the states.”

“Congress did not intend for the Clean Water Act to extend federal regulatory authority over groundwater, regardless of whether that groundwater is eventually or hydrologically connected to navigable surface waters,” the ruling reads. “… As a result, the plaintiff’s allegations are insufficient to state a claim for the unlawful discharge of a pollutant …”

Previously, Cmar had said it was important to note the court’s decision didn’t address the merit of the case — whether or not KU is in fact polluting the lake.

This week, Cmar said, “None of the steps that the company or the state have taken address the underlying problem that there are 6 million cubic yards of buried coal ash next to Herrington Lake that has contaminated groundwater flowing directly into the lake.”

Cmar said they are asking the appeals court to reinstate the case so they can keep fighting for a healthy Herrington Lake for generations to come.

KU maintains it is following a corrective action plan agreed upon between the state and the company. Prior tests by the Kentucky Division of Water — conducted due to previous violations by KU — found fish near the plant had arsenic levels at 98 times the amount allowed by Kentucky water standards.

EarthJustice, Kentucky Waterways Alliance and Sierra Club brought in an independent investigator, Dr. Dennis Lemly, to test fish in the area and supplied the results of Lemly’s work with the suit. Lemly’s findings have previously been questioned by KU spokesperson Chris Whelan.

Lemly’s results showed examples of fish with different spine and mouth deformities due to selenium poisoning. Whelan called Lemly’s findings “legal posturing” and said the results were inconsistent with what the state found when it conducted its own investigation.

Whelan has said KU is very concerned with the methods of which Lemly used to conduct his research, and the company has not been presented with any substantiating information.

Cmar disputed KU’s position, saying after the 40-year-plus fishery biologist’s findings and testimony were filed with the court in October, the state Division of Water requested several categories of additional information, including sampling data and more detail about the methods used. He said a courtesy copy of this information was also sent to KU.

The dismissal of the suit “underscores the role that Kentucky state agencies have in such issues,” Cmar said.

More than a dozen residents in the lake area had written the state asking for a public meeting to discuss and understand the extent of the situation. The state says no meeting is planned.

The appeal was filed Friday in the United States Court of Appeals for the Sixth Circuit, in Lexington.

“This is just the first step,” Cmar said. “Once the case goes up to the court of appeals, we will have the opportunity to submit new legal briefs detailing the areas where we believe that the district court’s decision was in error.”

Students at Danville High School are sending a message to students at Marshall County High School that they are “anchored”... read more