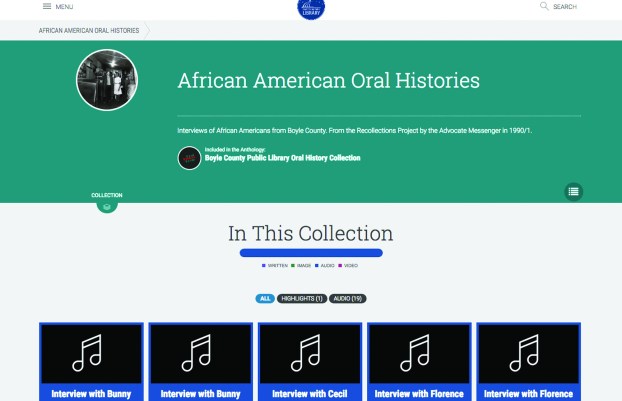 In their own words

It is said that oral history helps us understand the perspectives of people who may have otherwise not made it into any historical record, therefore providing a priceless education into the past.

With Black History Month in February, the Boyle County Public Library has decided to highlight some of the oral, African-American histories collected by The Advocate-Messenger almost 30 years ago — something it considers as priceless to share. Starting today, people can visit the Boyle County Public Library Genealogy & Local History Facebook page three times a week to listen to a new recording released, featuring a local person. 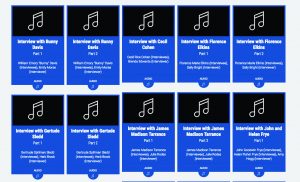 “This was huge — it was an oral history project, part of the 125th year celebration that The Advocate planned, plus the Boyle County Bicentennial Committee of that time wanted to, as well,” says Mary Girard, assistant reference librarian. The magazine was also huge, she says — titled “Recollections.”

Sixty-three people were interviewed, ranging in ages from 58-100. The interviews were taped and put together in the publication, which was printed June 23, 1991.

“We call it the ‘Recollections Collection,'” Girard says. A few years ago, the library made them digital, but didn’t have any way to share them with the public.

“Now, we have BiblioBoard, and we’re putting it to excellent use.” Girard is referring to a digital content platform that includes eBooks, images and local digitized materials as an online research tool and sharing platform. It offers modules of history and primary research material.

“We just thought it’s Black History Month, wouldn’t it be great to get all of the African-American interviews out there for people to be able to experience,” Girard says. The link will be posted to the library’s genealogy page starting Thursday, since it’s Feb. 1. But from that point on, links will be posted three times a week — on Monday, Wednesday and Friday — highlighting another local person’s interview.

Girard says the benefits to going back in time through oral history are two-fold.

“For the people who remember these people, and want to reminisce — it’s a sentimental thing,” she says. “But this also very much benefits students, so they can understand what it was like growing up in Boyle County. The oldest person interviewed in 1990 was 100, so they were around during the turn of the century.” She says it can give students of today a better understanding of how our local school systems used to work, how they became unsegregated and other events. “Yes, it’s local, but it also reflects what was going on on the national stage.”

Those who want to take a weekly listen can join BiblioBoard by creating a member profile, which unlocks several features of the platform and is free, or they can listen as guests through the links provided three times a week by the library.

“Accessible on a computer or free mobile app, BiblioBoard contains curated, multimedia collections of primary and secondary research material on numerous subjects, alongside a number of independently published eBooks,” Conover says. He says users may also view the library’s digitized archives via this resource as well, with the continuing addition of new material.

Second time around  The first step in an appeals process has been filed in a case against Kentucky Utilities, brought... read more