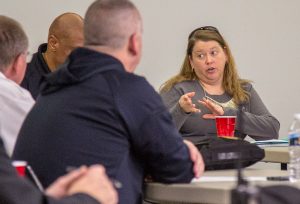 The Danville 911 Advisory Board met for the first time on Wednesday. The board is the creation of a 911 interlocal agreement between all governments in Boyle County and the Boyle County Fire Protection District, which all entities signed onto in either December or January.

The interlocal agreement states each responder agency in Boyle County will appoint one member to the board, and the board will meet at least quarterly to discuss the 911 budget, operational and technical issues, and grievances.

A major change on the way for Danville police is the upgrading of the department’s radios to better protect communications. The move has the potential to impact other responder agencies in Boyle County as well, since currently, agencies like the Boyle County Sheriff’s Office can listen to Danville Police Department activity. 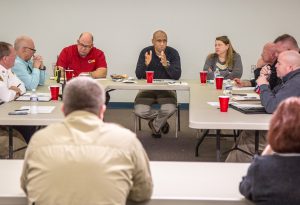 Gray said Danville reached out to Southern Communications, the company that supplies radios to the emergency agencies in Boyle County.

In the next few months, Gray said, Danville would be switching over to a more secure radio frequency.

“There’s a possibility we might open up that channel to other law enforcement agencies,” Gray said. “But, for now, that channel will be secured for us and for us only. We’ll work on those security issues and bugs. There will be our old channel still available, if there’s any type of incident.”

Sheriff Robbins said he is concerned that deputies will no longer be able to hear Danville Police officers. 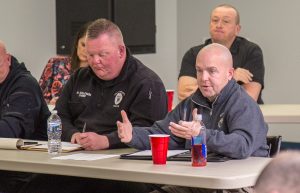 According to previous discussions about the radios, the Boyle County Sheriff’s Office could upgrade its radios as well and then be able to hear Danville’s communications once again. Wednesday was the first time it had been suggested at a public meeting that might not be the case.

Robbins said he was hesitant to spend about $25,000 — the cost of new radios — on a possibility, but was even more worried about what would happen if the county opted not to buy the radios now: the price on the radios will soon jump up by about $14,000, when the state contract price runs out.

“That’s my concern. If at some point, we are ever going to be able to communicate with you, we are, at some point, going to have to purchase this equipment,” he said. “I’m very passionate about it. I think it’s a big deal. I understand what your options are and I agree with them wholeheartedly. I guess I’m just looking for a little clarification to get some direction.”

Gray told him he couldn’t give him anything more definite.

“I want law enforcement services in this county to be — and I feel like we are — a tight-knit group,” Gray said. “I think we’re all working for the same goals. I think it is very important for us to get that channel and make sure we’ve got those hiccups out of it. I anticipate we can open that channel up to law enforcement only.”

Gray said he understood the concerns Robbins had.

Robbins said, “I think it’s very important … Homeland Security spoke at the (Local Emergency Planning Committee) meeting and the majority of his conversation was being in communication together. If not, we’re going back 20 years.”

Gray said he understood the timing wasn’t the best.

“It’s been a two-year process for us just to try to get this point. We’ve had some serious concerns about some infringements on our channels,” Gray said.

Boyle County Fire Chief Sexton said he also wanted to clarify something that had been quoted in The Advocate-Messenger.

“I don’t know how the fire department got involved in this. But someone made the comment that Boyle County Fire Department had 300 radios that had police frequencies in them. I just wanted to tell the board that we don’t have 300 radios and we don’t have DPD in any of those, unless someone has done it and I don’t know about it,” Sexton said. “We do not have DPD in anything, shouldn’t have, have no reason to.”

Sexton was referring to something Magistrate Jack Hendricks said in early January: “the fire department’s got about 300 radios out there and that’s awfully hard to control.”

Sexton said if the fire department needed to reach a Danville officer, they call into dispatch and request them to call or switch to a backup frequency.

Sexton said some of the radios do have the Boyle County Sheriff’s Office frequency programmed in and he was willing to speak with Robbins about whether that should change.

Gray said that was the point of the new 911 advisory committee — “to get things straight.”

Sexton said his department also wants to switch to a different frequency, something that he has been working on for a few months. There are several agencies on the same frequency, he said, including Boyle County EMS and Boyle County, Danville, Junction City and Perryville Fire Departments.

“It would probably be best for everyone to get us off there,” he said.

Sexton said they had frequencies that were assigned to the fire department some years prior, but are currently unused. They have checked to make sure the frequencies work and don’t bleed over into another.

Sexton said the county fire department would incur any costs for the change, but they wanted to wait until the Danville Police Department makes their change so it can all be done at the same time.

Gray said he had spoken to Hafley, the 911 center director, and Southern Communications.

“We feel we can accommodate that request,” Gray said.

Another big announcement to members came from Hafley.

“I am pleased and excited to announce we will be going live with EMD on Feb. 12,” Hafley said.

The discussion of offering EMD, or emergency medical dispatch, services has been ongoing in the county. Through that program, dispatchers will be able to guide someone through providing CPR, for example, while they wait on EMS to arrive.

Hafley said the dispatch center has nine full-time employees, plus one in training, and one part-time person. She has two positions remaining to fill for a total of 12. The goal for the Feb. 12 launch is to have four employees on first shift, four on second shift and three on third shift. Hafley said they will fill the shifts by using overtime hours until the new hires have completed their training.

Gray commended Hafley and said her department had done most of the “heavy lifting” in getting the EMD services implemented.

Gray said it was important to note the CAD system the Danville 911 Dispatch Center was changing to would still work with the equipment agencies currently have.

“The new CAD system will have some upgrades. If you want to partake in those upgrades, we’ll make those available to you,” Gray said, nothing there would be a fee for the new options.

The current CAD system is from 2003. The upgraded system will provide some additional safety and convenience — it will offer mapping of call data, for example.

“I’m not trying to drive up or forcing people to change their budgets at the last minute. I’m trying to make us better, more efficient, so we can provide the emergency services that our citizens deserve,” Gray said.

In the coming months, the Danville 911 Dispatch Center will make the move to the basement of Danville City Hall, said Nick Warren, IT director for Danville.

Warren said they expect construction to be completed within two weeks. At that point, installation will begin.

“I would guess at this point, we’ll start testing the system sometime in mid to late March,” Warren said.

The transition will begin sometime in April or after, if all goes smoothly, he said.

“Something will change that along the way. Right now, everything’s on schedule,” Warren said.