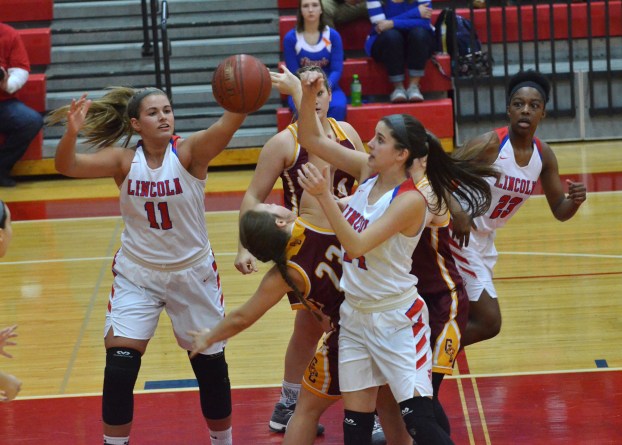 STANFORD — Lincoln County’s girls basketball team will be the favorite in the upcoming district Tournament.

The Patriots dominated the rival Garrard County Lions from tipoff to the final horn in a 57-28 victory Friday night at LCHS to claim the top seed in the 45th District standings.

“Clinching the top seed is always good and it was just a very good team win,” Lincoln coach Cassandra McWhorter said. “Garrard had two starters out (Ashlynn Clark and Fran Montgomery) so we knew they were down tonight, but you’ve still got to play the basketball game. You’ve still got to work with your kids on some of the things we need to continue to do well and focus on moving forward … It was a good team win.”

Lincoln, which improved to 17-5 with the win, 5-0 in district play, got off to one of its most explosive starts of the season Friday, scoring the first 25 points of the game and posting a 41-10 lead at the half en route to the lopsided victory.

While McWhorter knew her team was the favorite in the district matchup, she said she never expected the start her team had.

“I wasn’t expecting a 25-0 opening,” she said. “I knew being back home, being comfortable on our rims and shooting the ball well and having good ball movement, that we’re always capable of doing it. Didn’t expect it necessarily, but it was nice to see and I’ll take it.”

“They’re good. We’re not there yet. And that’s where we want to be,” Garrard coach Scott Latham said. “We keep doing the same mistakes over and over again … turning the ball over, dribbling with your head down where you can’t see the court – fundamental mistakes.”

Lincoln, which finished at 41 percent overall from the field (20-for-49), had a hot hand in the opening frame, knocking down five of its first seven shots to open a 15-0 lead. Then, after three missed field goals and a turnover, the Patriots went 6-for-6 to post the 25-0 advantage.

The Patriots hit three 3-pointers early, with Boyle draining two from long range and King adding her own trey. King finished with 13 points in the first quarter, getting seven of Lincoln’s first 15 then connecting on three shots in the 6-for-6 stretch. Reserve guard Cheyenne Releford knocked down Lincoln’s final field goal of the first to make it 25-0.

Brittany Butner finally knocked the goose egg off Garrard’s side of the scoreboard with 1:26 left in the first, nailing a 3-pointer.

Lincoln led 25-4 at the end of the first quarter and spent the second quarter continuing to cushion its lead. Boyle scored six points in the second as the Patriots outscored the Lions 16-6. Zaria Napier and King both had five points, with each bombing in a 3-pointer to make it a 41-10 ballgame

Garrard’s offense sputtered from start to finish. The Lions, who finished at 27 percent overall (8-for-30), were 1-for-9 in the first quarter and just 2-for-10 in the second. Olivia Saylor and Morgan Day scored Garrard’s buckets in the second period.

Missed shots proved costly for the Lions, but they didn’t help themselves with turnovers, with 22 for the game.

“We’ve got to get our guards back,” Latham said. “That’s where we’re struggling turning the ball over.”

Lincoln shortened the second-half playing time by invoking the running clock in the third quarter. The Patriots posted their largest lead of the game, 47-10, with 4:27 to go in the period after two Lydia Rice free throws. They took a 51-19 lead into the fourth quarter.

Madisyn Neeley led Garrard in scoring with nine points. She scored six of those points in the fourth quarter as the Lions edged the Patriots 9-6.

The decisive win gave McWhoter another opportunity to clear her bench.

“It’s good to get to play everybody. Like I said after the Boyle County game, we’ve got some growing up and maturing to do,” she said. “It’s always a positive thing. We’ve got kids that are going to have to step up. We get everybody back and the younger ones need maturing and development and varsity playing time.”

But while the younger players get more playing time, Lincoln’s starters get a little frustrated.

“It’s tough sometimes for the kids to stay motivated,” said McWhorter. “They like to play. They like for games to be tight at times and to see if we can overcome – not panicking and executing – and see how we do.”

Boyle County wasn’t very good at the start or the end of Wednesday’s game, but the Rebels did enough in between to... read more