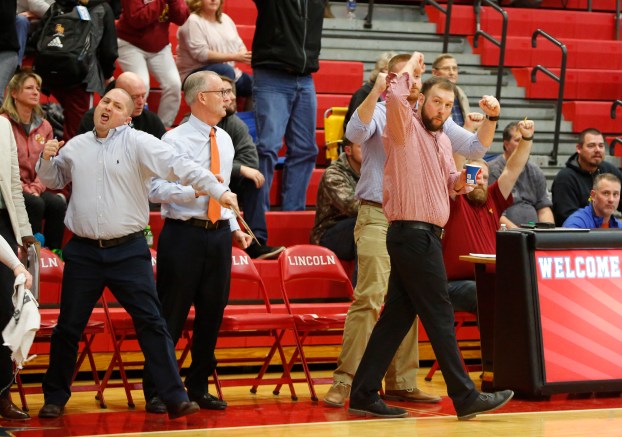 STANFORD — There was no doubt that the victory meant a great deal to Ryan Young, but it was a pretty significant win for his team as well.

The Garrard County boys only have half a dozen wins so far this season, and now they have one they can build on — and one they can brag about.

The Golden Lions fought off Lincoln County for a rare victory over their archrival, a 62-57 win that was their first 45th District win of the season and Young’s first win over his alma mater as a head coach.

“It just feels good to get a win here,” Garrard guard Braden Sebastian said. “It feels good for us to finally get a win here against Lincoln. We really enjoyed this. Coach really had us a good game plan set up, and we just came out and did the job and got it done.”

Garrard had lost its five straight games to Lincoln since a February 2016 win, and the Lions had lost 22 of the last 23 games and 30 of the last 32 in the series.

The Lions were 0-4 against the Patriots in two seasons under Young, who played for Lincoln coach Jeff Jackson from 2004-08.

“This is a special place to me, with what coach Jackson has done for the program. He’s a tremendous coach. He makes me a better coach every day because I know how hard he prepares, and that fuels me,” Young said. “But when we’re trying to build a program here, we’ve got to believe that we can win these types of games, and this was a big step forward for us tonight in this environment.”

Jackson embraced Young and spoke to him for several seconds when the two shook hands after the game.

Garrard took Lincoln to overtime in a 63-57 loss nine days earlier, and Jackson said he tried to convince his players this game wouldn’t be easy.

“We tried to tell our kids it’s a district game, and they’re good,” he said. “They played better than we did, they played harder than we did, and I didn’t do a very good job having our kids mentally ready to play.”

Sebastian scored 21 points and Charles Jones added 14 to lead Garrard (6-16, 1-4 district), which led for the final 17:14 after the lead changed hands eight times in the first half.

The Lions entered the game as the No. 1-ranked team in the state in free-throw percentage at .784. They finished right at that mark Friday by hitting 25 of 32 attempts, and they went 12 for 14 at the foul line in the final 3:13 to put the game away.

“We did a better job in the late-game situations, and that was important for us,” Young said. “We’ve worked on that in practice: Up two, three minutes left, what do we need to do? And the guys really stepped up when they needed to make them. A lot of times in the past we might have folded — they made a lot of tough shots down the stretch — but I just felt like it was our night tonight.”

Garrard got to the line twice as much as Lincoln (11-15, 2-3), which was 13 for 16, because the Lions got to the basket with regularity against the Patriots’ defense.

“They pretty much did what they wanted to offensively, getting to the rim, and we didn’t do a very good job defensively. Our rotations were not good out of our zone, we didn’t close out real well, and they made shots,” Jackson said.

“We had some quality looks from 3 in the first half, and we didn’t knock ’em down, so we made an adjustment. We really focused on getting the ball to the short corner and playing out of that through the zone,” Young said. “We’re supposed to be the No. 1 free-throw shooting team in the state, so we were trying to get to the line.”

“He told us we’re the No. 1 free-throw shooting team in the state, so he said just attack, kick out for 3s, but mostly just attack and get to the free-throw line,” Sebastian added.

Sebastian missed six of his 13 free throws in the first three quarters, but he was 6 for 6 in the fourth. Charles Jones, Trevor Jones and Justin Preston each went 2 for 2 in the final period, and Carter Moss was 2 for 4.

Trevor Jones scored the final five points of the first half to give Garrard a 24-20 lead, and the Lions hung onto that lead with both hands in the second half.

Garrard led by as many as 10 points early in the second half and was up 48-39 after opening the fourth quarter with an 8-2 run, but Lincoln answered behind Chase Phillips, who scored all of his team’s points in a 10-3 run that pulled the Patriots within 51-49 with 2:30 left.

The Patriots then had two empty trips, however, and Garrard regained an eight-point lead. The Lions then sealed their win at the stripe after Lincoln’s Blake Smith sank two 3-pointers.

Smith went 6 for 10 from behind the 3-point line and scored a game-high 24 points for Lincoln. Phillips scored 12 points in the fourth quarter and finished with 19, but no other Patriot had more than three points.

The Patriots and their coaches wore orange #MarshallStrong T-shirts during warmups and on the bench in support of Marshall County. Jackson was the head coach at Marshall from 1989-91.

Justin Preston had 10 points and 10 rebounds for Garrard, and Sebastian also had 10 rebounds. The Lions outrebounded the Patriots 31-22.

“We’re starting to play better and starting to find ourselves. We’re ready for the challenge,” he said.

Young said this win could also help Garrard beyond this season.

“We don’t have a lot of tradition in our basketball community. It’s going to help our feeder system, our middle school program, to have those young guys up in the stands watching this,” he said. “It should be exciting to play basketball. There’s good basketball played in this area, and we’re trying to become a part of it.”

STANFORD — Lincoln County’s girls basketball team will be the favorite in the upcoming district Tournament. The Patriots dominated the... read more