Looking Back: Kentucky School for the Deaf

Our ice pond is a success! It filled up with water just before the Christmas blizzard put in its appearance. We gathered fine clear ice from two to four inches thick. Some of our northern friends, accustomed to seeing ice two feet thick, may scoff at the thickness of ours, but we congratulate ourselves that we got any at all. It is not every winter that we harvest ice in Kentucky.

We had old-fashioned Christmas weather during the holidays – snow on the ground, crisp and cold, with thermometers for a number of days registering from 8 to 14 degrees above zero. Sleighs loaded with merry parties of young people enjoying the unusual luxury were seen here and there.  As we go to press a snowstorm is in progress to the delight of the small boys and the disgust of everyone else.

The cold spell we are passing through has been the longest that the oldest inhabitant can call to mind. Snow has been on the ground almost constantly since the middle of December, and the mercury for almost a month has been close to zero. We have not suffered, however, as our steam heating plant has worked admirably, keeping all of our large buildings perfectly warm while the school rooms are thoroughly comfortable.

January 1918
Mr. and Mrs. George McClure received word last week from an Atlantic port that the submarine chaser on which their son-in-law Mr. Elbert Gary Sutcliffe was cruising had been sunk in a collision, but that he escaped unhurt.

We have had more snow this winter than for years past but the boys do not indulge in coasting. What is the matter? Are they becoming proper young ladies? The boys who have skates have been enjoying fine sport lately. The pond at the foot of the garden on which old-timers used to have such good times has been filled in so the boys now go to Clark’s Run, a short distance south of the school.

A gentleman with a troupe of trained dogs gaily decked out stopped in front of the Institution Tuesday. The children were much interested in the sagacious animals.

The small girls got possession of a large sled last Saturday and spent the whole afternoon coasting down a little bank near the school.

We had no meeting of the Literary Society last Saturday night as it was too cold in the chapel. The girls went to bed with the chickens, at 7 o’clock. — Girls’ Reporter: Martha Aushin

Mr. and Mrs. Lee took dinner with Mr. and Mrs. Reed Friday. They visited the sewing classes and went up to the tower and viewed the city. 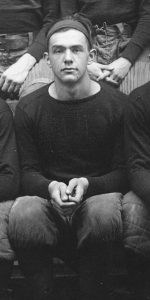 William M. Suttka, 1915 KSD graduate, wrestled professionally as “Silent Olsen”between 1918 and 1933 in the United States and Europe. By 1920 he held the championship title for light heavyweight wrestlers. In October 1921, Centre College beat Harvard 6–0. The Kentucky Standard reported that: “During the last week of training before the Harvard game, William Suttka (Silent Olsen) staged wrestling bouts with “Red” Roberts, the big Centre fullback, in order to help reduce the latter’s flesh.” Suttka’s father taught at KSD and his parents lived in Danville. Subscribers could follow his career in The Advocate-Messenger through regular articles on his upcoming bouts and visits to Danville.

William Suttka, better known as Silent Olsen, a prominent young professional wrestler was matched with Masuka, the Jap Marvel, on the evening of December 24th. The result was a draw. His manager announces his next opponent will probably be Joe Turner, of Washington, D.C

Among the Pupils column:
Playing rook is all the rage among the boys this week. What will be next? Rook and Flinch are rivals in popularity. —
Edna Hamilton and Mark Woodruff, Reporters

Excerpt from an article: “School for the colored deaf”: As formerly, a few of the older boys have been given instruction in shoe-making. This trade and garden and farm work constitutes the only manual training given them. The girls are taught sewing and dress-making, do all of their own ironing, and have the care of their dormitories and the dining room.

Mr. and Mrs. William Suttka and their little daughter of Cincinnati spent Christmas with Mrs. Sarah Suttka. Mr. Suttka was also an interested visitor at the organization meeting of the Danville Division of the N.F.S.D. – National Fraternal Society of the Deaf

Mr. Beauchamp says, as he was passing the Citizen’s National Bank the other morning on his way to school, four armed soldiers were on guard. Mr. Beauchamp, with knees trembling, walked past them with the thought that if they should challenge him and he could not hear them, what would they do? Mr. C.B. Grow says the school people would have given him a nice funeral.

Danville experienced its first blackout Friday evening January 15 and Superintendent Lee established a First Aid station in our school building on south Third Street with a full line of splints, bandages and stretcher poles just in case they were needed. Fortunately the night was quite light due to a bright moon and no accidents were reported. 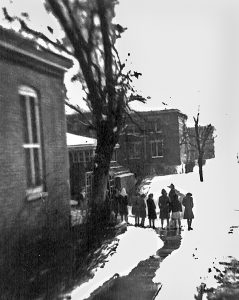 A group of older KSD girls stand outside the Kerr Hall chapel entrance on a snowy day in the 1950s. The building in the foreground is the staff dining hall. Clerc Hall and Gallaudet Hall (quarters for the elementary students) are in the distance.

100 YEARS AGO — 1918 Editorial repartee: An editor received this letter from a fresh youth: “Kindly tell me why... read more