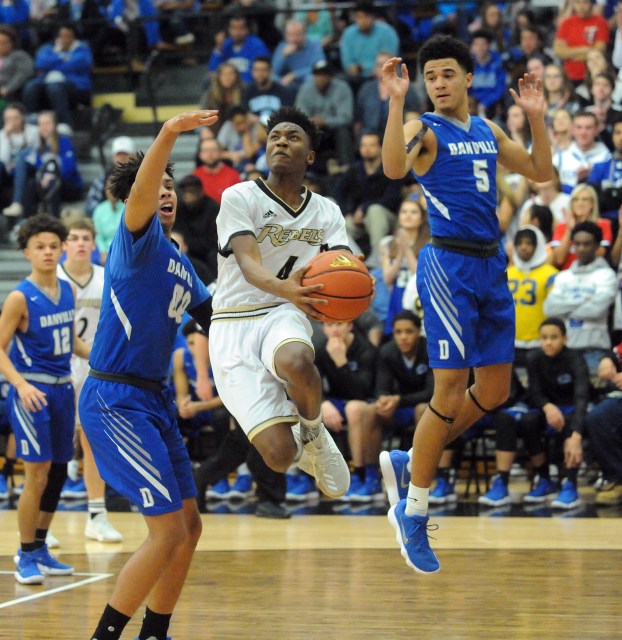 The Rebels finished undefeated in regular-season district play for the first time since 2005 after a 64-48 victory over Danville.

Jason Alexander and Reese Smith combined for 48 points to lead the Rebels in a contentious game from start to finish. The Rebels held a lead for a majority of the game, but a 16-2 Danville run at the end of the third quarter and start of the fourth quarter set up a fiery finish.

Boyle led 47-44 after Danville’s run with less than seven minutes left in the game. But a series of Danville miscues — including two personal fouls followed by technical fouls — resulted in a 17-0 run for the Rebels.

Boyle hit 7-of-8 free throws out of those four fouls in the fourth. The first set fouled out Danville’s leading scorer, DeShaud St. Martin, who finished with 14 points.

Boyle head coach Steve Adams said he was proud of the way his team stayed composed when the game got contentious.

“Except for about six or eight minutes, two or three spurts where we quit doing what we do, we played pretty well,” Adams said. “I think Danville probably lost their composure a little bit there and did some silly things that helped, but our guys have done a good job of keeping their composure. We talk about that every day, just continue to play and good things will happen.”

Adams said he had two former players — Kyle Rice and Zach Hester — speak to the team before the game, and that same message was shared.

“That’s exactly what they told them: Don’t worry about little things, just keep playing,” Adams said. “Our guys have done a pretty good job of that. They know we have the capability to go on big spurts and the reason why is because our guys really do a great job defensively. We’re smaller than every team we play, minus (Will) Bramel. They do a good job of positioning, going and getting rebounds.”

Danville struggled to stop the bleeding as Boyle ballooned its lead while working the clock in the fourth quarter.

“When you get behind (Boyle), they’re hard to play against because they do so many good things offensively,” McKinney said. “You’ve got to start to chase the ball. They run their stuff so good, when you have to play from behind they’re hard to come back against. I thought we did a nice job once we started scoring, we could get in our press a bit and we changed the game a little bit.”

Danville’s pressure successfully forced 14 Boyle turnovers, and Adams credited the Admirals’  defense forcing his players into bad spots. It was Alexander and Smith who helped Boyle’s offense stay afloat through the Admirals’ pressure.

“The times we got in trouble, we were getting stuck,” Adams said. “As long as we’re moving the ball, going from side to side, (Alexander and Smith) do a great job of attacking the basket and being able to score. They did a great job. Danville is athletic as any team we’ll see. Except for that stretch where they got back in it, we did a good job.”

With Garrard County’s victory against Lincoln County, the race for second place in the 45th District is still up in the air.

It’s the first of four games in six days for the Admirals, who host Rockcastle County tomorrow before visiting Model and Garrard County next week. McKinney said the focus will be getting shots to his shooters — leading scorers Jared Southerland and Zach Thornton combined for just seven shots against Boyle.

“Zach Thornton had two field goal attempts. Jared only had five,” McKinney said. “Our shot distribution isn’t really good, that’s seven out of our guys that should be taking more shots … It was just a weird game, you feel like we had a real good chance to win it and it was an 18-point game. But give them credit, they do things right. They’re good defensively, they take care of the ball.”

Boyle’s finished with district play and will host Southwestern next week.

“The kids are doing a good job, we didn’t have a lot of preparation,” Adams said. “The kids come out and fight, at this time, it’s just knowing what we should be doing and refine it and try to get better at it.”

Boyle County handled Danville’s pressure to secure the No. 2 seed in the 45th District, winning 57-44 on Friday. The... read more