From our schools: Rebel Pride, Feb. 5

Many seniors at this time of year are scrambling to compete for scholarship opportunities as they prepare to fund their college experiences. One senior in particular has taken on a unique approach to securing scholarship dollars. 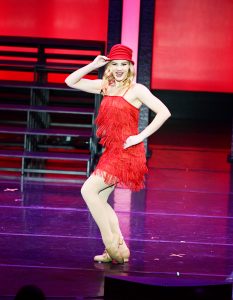 Picture by Chris Zollner
Jessica Majors performing in the singing and dancing portion of the Distinguished Young Women competition.

Boyle County’s Jessica Majors decided to compete in the scholarship program Distinguished Young Women (DYW). Her mother, Donna Majors, a previous participant herself in the program formally known as Junior Miss, encouraged her daughter to be involved with this renamed scholarship program.

Jessica thought this was a great idea as the Kentucky DYW program annually awards over $30,000 in cash scholarships while state colleges and universities offer more than $8.2 million in scholarships.

Majors could see the potential for a fun experience in using her talents to compete for scholarship dollars. DYW “inspires high school girls to develop their full, individual potential through a fun, transformative experience that culminates in a celebratory showcase of their accomplishments”, as their website distinguishedyw.org describes.

In the summer of 2017, Majors began her preparation for a DYW At-Large competition. Because Boyle does not offer a DYW program, this was her only opportunity to qualify for state. With her participation in dance at the Danville Dance Company for five years as well as her vocal instruction for seven years, it was easy to decide what she would do in the talent portion of the competition. 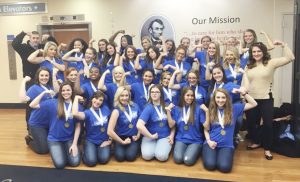 Photo by Veronica Gettinger
Jessica Majors and other DYW participants volunteering at the Christian Appalachian Project.

At the end of September, Majors performed in front of several judges during the At-Large competition held at Lexington’s Immanuel Baptist Church in hopes of qualifying for the state competition. “The At-Large participants are judged in the categories of fitness, talent, self- expression, interview, and scholastic scores. If your overall score is high enough, you qualify to move on to the state program.” Fortunately, Majors qualified for the state program scheduled in January.

Majors decided to alter her talent performance and spend even more time preparing for the smallest of details. “In preparation for this program, I worked on my talent and fitness routines weeks in advance. In addition, I participated in mock interviews and optional practices held by regional and state DYW directors.”

“A lot of the preparation is done at home, but we rehearsed and prepared more once we arrived in Lexington the week before the program.”

On January 13th and 14th at the Singletary Center for the Arts in Lexington, thirty-one senior girls from across Kentucky competed.

The program was much more than just a weekend competition. “I arrived a week before the program in Lexington to begin rehearsals for the two-day program at the end of the week. I stayed with a host family for the week and was able to meet many new people and form new friendships. Throughout the week, we had guest speakers and past DYW representatives come back and do workshops with us.”

“One of the most valuable experiences, though, was doing community service projects during the week. We visited the Veterans hospital, and packed gift bags for women of the Christian Appalachian Project.”

Majors placed first runner-up and received preliminary awards in the categories of fitness, talent, and self-expression. Majors won $4,400 in scholarship money that she plans to use for college tuition and expenses in the fall. “This program has truly impacted me and many young women, and I am very grateful to have had this opportunity.”

“My favorite part about the Distinguished Young Women Program is their platform ‘Be Your Best Self’. This platform emphasizes the importance of being healthy, ambitious, involved, responsible, and studious. The program is all about empowering young women to be the best version of themselves and this was continually emphasized the week that we were there to prepare for the program.” 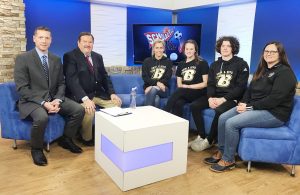 On January 24th, two Boyle County high school athletic teams were featured on WKYT’s Scholastic Ball Report. Swimmers Sarah Burns, Zach Frazier and Ashton Cox along with Coach Crystal Ellis represented the swim team while Coach Brent Wagner brought with him track and field athletes Becca Tarter, Landon Bartleson, Daneezia Patton, and Jackson Cox. This was an amazing experience for these students who were given the opportunity to be recognized for their academic and athletic achievements. 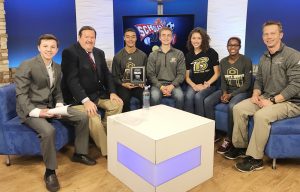 The Scholastic Ball Report television program highlights the achievements of student/athletes throughout the Central Kentucky viewing area. These interviews are broadcasted by WKYT every Sunday afternoon during the school year. Coaches throughout the year will submit athlete grades, ACT scores, and sport statistics for the program director to choose which students they feel would make good candidates for the show.

Senior Sarah Burns says, “It’s a great experience for student athletes, and brings well deserved recognition to the outstanding local talent. The Scholastic Ball Report also covers a wide range of sports, which is refreshing. Not many people can say they’ve been on TV, so I’m very thankful to have had the opportunity.” 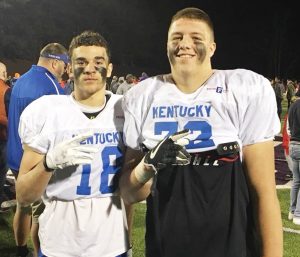 Boyle County seniors Nick Walker and Ryan McClelland were selected to represent the state of Kentucky in the annual Border Bowl All-Star football game against state rival Tennessee. This year the bowl was hosted by Sevierville High School near Gatlinburg, Tennessee on Sunday, Jan. 20.

Walker and McClelland were honored to represent their state after helping the Rebels to a 14-1 championship season. Walker shared, “I knew it was an all-star game between two states, but I did not think I would have the opportunity to play in it.”

The players reported in just a few days prior to the big game and found the environment to be much more relaxed that what they were used to. McClelland explained, “The practices were chill, nothing really hard. The practices were mainly together as a team. It was a lot of mental work, and we did a couple of one-on-one drills.

Away from the practice field, the two seniors enjoyed their free time walking the strip of Gatlinburg with their new friends. McClellan shared, “The practices were chill nothing really hard. They were together as a team so it was very mental to get to know our playbook.”

The Kentucky team won 31-14, but neither Walker nor McClelland planned on that game ending their football careers. McClelland recently committed to playing at the University of Pikeville while Walker has narrowed his choices to Morehead State, Campbellsville University, Georgetown College, and Lindsey Wilson.

From our schools, Rebel Pride

Ultimate success in only five short years Sam Clark 01/17/2018 Many very successful sports programs have had to serve their... read more